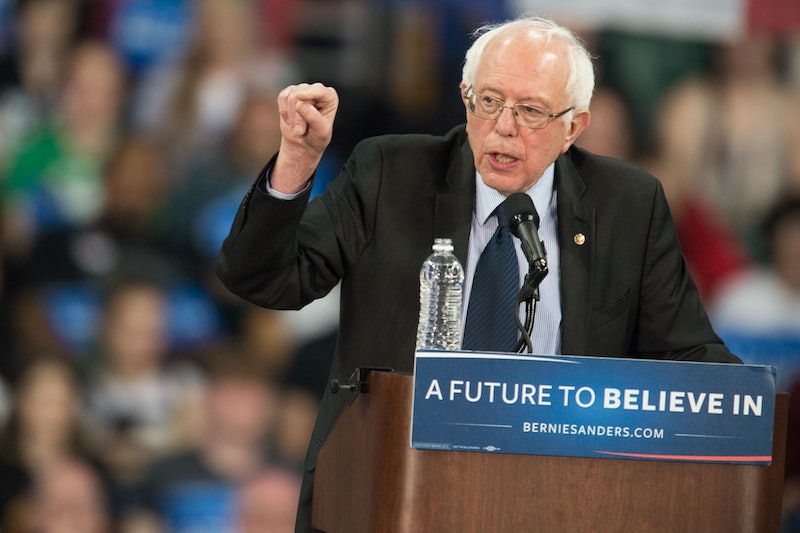 Well, that was rough. Rough if you're a Bernie Sanders supporter, that is. At the start of Tuesday, the Vermont senator's campaign was hopeful that he might win the state of Ohio, putting a big new feather in his cap. Now, however, that dream may well be dead — Sanders lost Ohio by double-digits, and also lost badly in North Carolina and Florida. And while he was competitive in Illinois, and still looks like he might barely win Missouri, the math is dire. So, how many delegates did Bernie Sanders win on Super Tuesday 3?

The numbers are still rolling in, obviously, so the exact figure may change a bit as the night wears on. But here's what you definitely can say at the moment: Sanders is going to walk away from two states, Missouri and Illinois, either narrowly ahead or narrowly behind Clinton in delegates, but the other three states are going to be lopsided affairs.

As it stands now, according to The New York Times' excellent primary results tracker, Sanders will claim at least 124 delegates out of Super Tuesday 3, bringing his total to at least 704 (including 26 superdelegates). Which, it must be said, pales in comparison to the confirmed count that Clinton has already claimed, a robust 253 delegates, bringing her total to 1,488 (including 467 superdelegates).

The upshot? Just like last week's set of primaries, Super Tuesday 3 was a net loss for Sanders, and it probably left a stinging feeling — his campaign had high hopes for another upset win in Ohio, along the lines of what they achieved in Michigan a week ago. But Clinton actually outperformed her poll numbers in the Buckeye State, and added that (along with Florida and North Carolina) to her list of landslide wins.

And remember: thanks to the Democratic Party's reliance on proportional delegate allocation, it's the big wins that matter most, while the benefits of narrow wins are severely mitigated. This is precisely why Sanders' epic upset win in Michigan was so badly overshadowed by the hard, heartless delegate math — he lost by such a staggering margin in Mississippi that he actually lost ground overall, despite winning the news cycle.

If you can count on anything, however, it's that Sanders isn't going anywhere. He's heading into a portion of the primary calendar that figures to be advantageous, and he's got more than enough cash to stay in this race, having raised an enormous war chest on the back of his record-setting number of small donations.