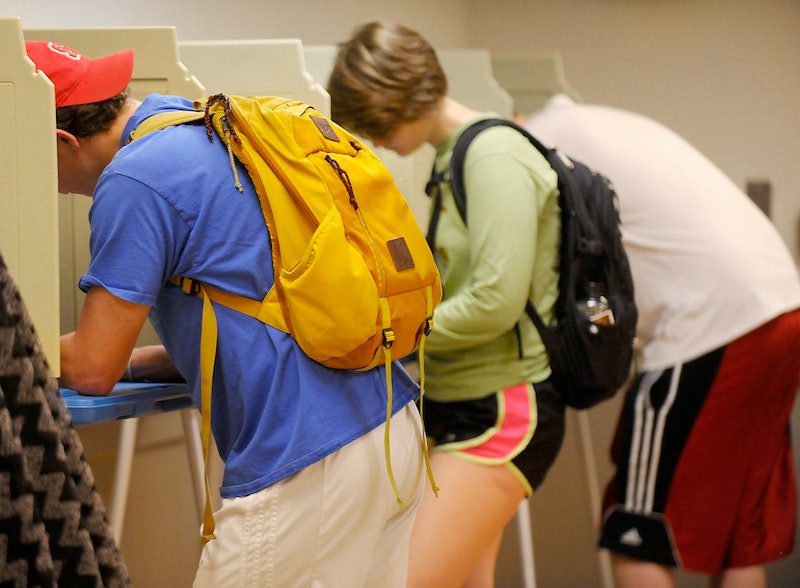 March 15 turned out to be a monumental election day for both the Democratic and Republican races. Donald Trump solidified his support system in the South after winning Florida and inspiring its senator Marco Rubio to suspend his campaign. On the Democratic side, Clinton's victory in all five states launched her closer to a nomination and left Sanders in a tough spot. But Super Tuesday 3 was just as much about the voters, as it was about the candidates. In addition to the decisive results, North Carolina's skyrocketing voter turnout wowed the nation.

The Green Papers reported that slightly more than 17 percent of North Carolina's 6.5 million registered voters contributed their say to this year's primary election. Last year, less than 15 percent of the voting population showed. According to the state's Board of Elections, nearly 11 percent of North Carolina's registered voters participated in the 2016 primaries before the polls even opened on Tuesday morning. That's a big jump compared to four years ago, when just eight percent of the state's registered voter population cast their ballots during the early voting period. But, this year's election is a little crazier than most, and definitely much different from that of 2012.

North Carolina's state legislators decided to push the primary date forward in 2013. Unlike the 2012 primary, which came knocking on the Tar Heel State's door in May, the 2016 primary took place much earlier on in the election season and emphasized the importance of the people's vote. Additionally, this race featured no presidential incumbent, since Barack Obama is nearing the end of his second term as president. Traditionally, incumbents have had an inherent upper hand in elections, but the playing field was slightly more even for the Democrats this year, inspiring a newfound sense of agency among Democratic voters. Though the ratio of Democratic to Republican voter turnout has remained fairly consistent since 2012, each party has increased by tens of thousands of voters. For example, 88,000 voters registered as Democrats and 55,000 as Republicans in the days leading up to this year's early election kickoff.

The state's 10-day-long early voting period played a huge role in the heightened turnout. In total, over 680,000 people, a stunning 10 percent of the state's voting population, voted on North Carolina's early election days. Since the state shifted election day forward, its counties weren't certain of how many people to expect at their local polling stations. This year's preparation would simply have to be a process of trial and error. And though the polls were more hectic than expected, county officials were proud of the increased participation. Wake County residents, in particular, waited in line hours after the polls closed, reported Raleigh's The News & Observer. Gary Sims, the county's election director, expressed his excitement.

It's phenomenal. This is a higher turnout than we projected. We tried to use some statistics from other states that have earlier primary elections. It's been a long time since North Carolina had an early primary like this.

Though North Carolina's increased voter turnout is a step in the right direction, the state still has a long way to go to encourage more than 17 percent of its population to visit the polls. For example, in Florida, which also voted on March 15, over 2 million voters cast their ballots in early elections and represented over 23 percent of the population. Unlike Florida, however, North Carolina is a newcomer to earlier primaries. This year marked the state's first opportunity to hold the primary in March as opposed to in May, and as voters become more accustomed to the new date and the excitement that comes along with it, turnout will surely continue to rise.