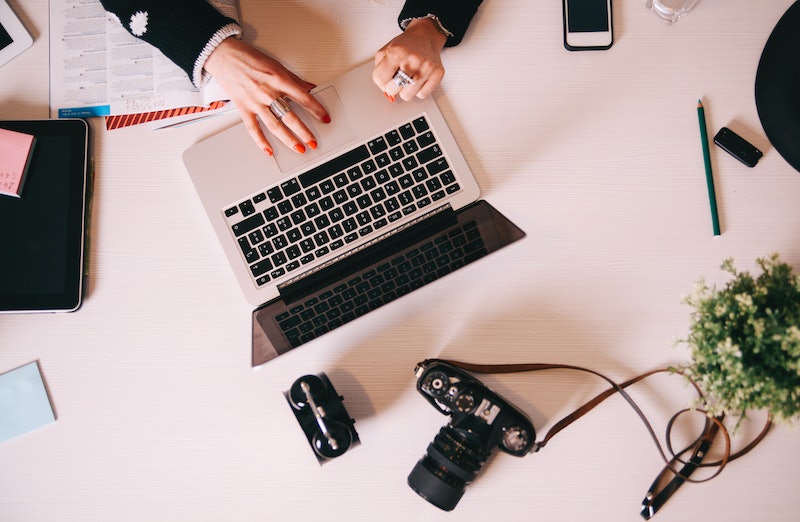 If you're anything like me, keeping up with the flood of emails you receive throughout the day is a huge part of your job in and of itself — but new research is suggesting that not only does taking a break from email help your work productivity, but it could improve performance even after returning to emails. That's surprising, considering the dread many of us feel when we return to work Monday morning and see 143 unread emails in our inbox – and that's if we stopped checking emails over the weekend in the first place. (Many people never stop.) Here's what we know.

The study included 13 participants at a government facility, all from varying teams and at varying levels of advancement. The researchers outfitted everyone in the company with heart rate monitors to see how often throughout the day they got interrupted, moved around, and took breaks. They also tracked on their computers how often the participants' cursors moved toward their email inboxes, how long they had certain pages open, and how often they switched between tabs. No big deal, right? Here's where it gets exciting.

The 13 employees quit emailing, cold turkey. Obviously, they were slightly anxious at first; but the researchers eventually came upon some interesting results, all of which offer a compelling case for taking a break from email throughout your workday:

1. The Participants Moved Around More Often

Specifically, they were up and out of their chairs more. This isn't really earth-shattering; it makes sense that they got up more often to speak to coworkers, since they couldn't rely on emailing them. But it's still notable, because not moving around enough is slowly killing us all.

2. Their Work Was Deeper And More Focused

You know that amazing feeling when you're able to hunker down and get through a task completely with something akin to laser focus? That beautiful feeling of productivity and concentration that doesn't happen all that often? The participants experienced this a lot, since they had fewer distractions.

If you think that those "minor" distractions aren't affecting your work productivity, you might want to consider this further: One UK study found that workers distracted by emails and ringing phones experienced a decline in IQ that was twice the drop of workers high on marijuana. And trying to refocus on the task at hand isn't easy: It can take as long as 45 minutes to get back to concentrated working.

3. The Participants Had Lower Heart Rates

This is an obvious sign of a calmer and more relaxed employee. And if that doesn't convince you, the participants even informed researchers that they felt happier and less anxious.

4. After Returning To Their Emails, They Were Still Calmer

I suspect we'd all expect these participants to be frazzled and stressed to the max upon returning to their now-massive collection of emails — but they weren't. In fact, they reported that dealing with emails in bulk — as opposed to dealing with them as they arrive throughout the day — was easier. This practice of holding off on emails, even for just short periods throughout the day, could be of great use, particularly since one study found that the average corporate worker sends and receives approximately 105 emails each day.

5. The Participants Realized How Trivial Some Emails Are

They reported that many emails weren't even that important, or that the sender could have avoided it in the first place if they had just done a little more work on their end. The takeaway? Maybe we fire off emails too easily because we're looking for a quick answer that we could really get on our own.

I feel like this is an especially important point, just because we generally spend a ridiculous amount of time emailing. In one study, workers estimated that they spend approximately 6.3 hours every single day checking their business and personal email. Over six hours! That's crazy! For 18 to 34 year olds specifically, 45 percent open emails as soon as they wake up.

The research is rather plentiful and largely in agreement: Spend less time emailing, and you're likely to be a more productive worker.

More like this
How To Protect Your Digital Privacy If You Need An Abortion Post Roe v. Wade
By Kaitlyn Wylde
6 Abortion Advocates To Follow On TikTok
By Sara Youngblood Gregory
Kris Jenner’s Advice For Kim Kardashian Is Going Viral On TikTok
By Courtney Young
The Viral TikTok “30,000” Sound Fits Nearly Every Scenario
By Courtney Young
Get Even More From Bustle — Sign Up For The Newsletter