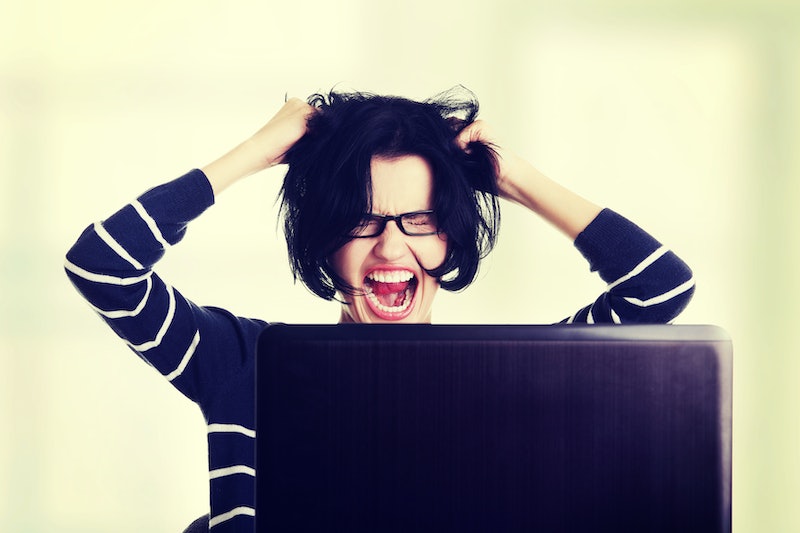 I don't mean to alarm you, but your job is trying to kill you. But don't take my word for it — check out the study just published in health journal The Lancet this week, which found that people who work longer hours have a 30 percent greater risk of developing type 2 diabetes than those who work less. The study, which spanned four continents and followed more than 200,000 subjects for seven years, discovered that workers who put in more than 55 hours a week at what the study called "low socioeconomic status" jobs were 30 percent more likely to develop type 2 diabetes than those working fewer hours or different jobs. But while this is the latest study to confirm that your job will be the death of you, it is certainly not the first. It doesn't matter if the work you do is manual labor or paper-pushing, located in an office or simply on your couch — threats like chronic disease from a sedentary lifestyle, viruses, and more await. Yes, that's right, according to science, your job is trying to claim your life and your soul.

What's the solution? A standing desk? A different job? A move to the mountains, where you'll rename yourself "Hawkflower" and live off the land and the radishes that grow freely there? Read on, discover the threats that lurk in every corner of your "safe" desk job, and make your decision from there (though I, for one, think you'd look lovely in a dress made out of potato sacks and radish leaves).

MULTI-TASKING CAN SHRINK YOUR BRAIN

Your job requires a lot of multi-tasking, which keeps you sharp and on your toes, right? Answering five emails at once, while also weighing in on a conference call and texting a friend can make you feel effective, dynamic, and focused, like you're the sassy heroine of a TV legal drama. But researchers at the University of Sussex found that multi-tasking with technology actually shrinks the gray matter in your brain. Lower concentrations of gray matter are linked to anxiety, depression, and poor impulse control — all of which make you less effective, focused, and dynamic in real life.Solution: Focus on one damned thing at a time, man. That YouTube video of a cat that thinks it's a dog will still be there an hour from now.

SITTING TOO MUCH CAN CUT YEARS OFF YOUR LIFE

The health risks of sitting have gotten a lot of press recently, mostly because it seems like there is literally nothing you can do about it — sitting for more than four hours a day increases your risk of cardiovascular disease by 125 percent, and your risk of death from any cause by 50 percent. Any cause! That's everything from cancer, to a piece of particle board coming dislodged from your ceiling and hitting you on the head.

Solution: Using a standing desk, or just making sure that you get up and walk around the office a few times an hour for five minutes, can actually totally solve this problem.

OFFICE FOOD CAN MAKE YOU EAT 1000 EXTRA CALORIES A WEEK

Does your office have one of those awesome candy dishes? The kind that seem to magically refill with mini-Hershey bars every time you're so stressed out, you feel like you might straight-up lose it? Well, all those stress-counteracting snacks can add up to several hundred extra calories per week, according to a study at Cornell University's Food Brand Lab — and you can raise that calorie count to more than 1000 each week if you sit within arm's reach of said dish of danger.Solution: Sit far away from the candy dish! As far as possible.

FLUORESCENT LIGHTS GIVE YOU RETINA DAMAGE

You know those horrible fluorescent lights in your office? The ones that buzz incessantly and make everyone look like they just crawled out of an open grave? Well, they're more than just annoying — scientists have found that long-term, chronic exposure to fluorescent lights can contribute to "senile macular degeneration," an eye disorder found in the elderly that can cause your vision to become blurry, and eventually create complete blindness.Solution: If you have your own office, turn off the overhead light, and use a regular desk lamp. But if you're in a cube with no where to hide from the overhead light ... sorry, you're kinda screwed.

Though green offices are created to be healthier both for the environment and for the workers toiling inside them — and the American Journal of Public Health found the green buildings have less worker absenteeism than traditional buildings — some have found that these energy-efficient buildings can also trigger asthma episodes. Dr. Nathan Rabinovitch, an asthma specialist at National Jewish Health in Denver, claims that the lack of air leaks in these kind of buildings can trap lung irritants inside, and make office dwellers more likely to breathe them in.Solution: If you're experiencing frequent asthma flare-ups in your new green office, talk to your doctor. Your HR department should be required to provide you with facilities to help you, like an air purifier, or (gasp!) a window that actually opens.

YOUR OFFICE COFFEE POT IS a germbucket

OK, so your office is making you dumber, more anxious, blind, and sick. But at least you get free coffee, right? Yeah, make sure to save room for some disease! A study recently presented at a meeting of the American Society for Microbiology showed that offices are virtually petri dishes for germs — it takes only two to four hours for a virus to spread through an office, after a germ-carrier touches the handle of the office coffee pot. And when you touch a communal office item, you pick up 30 to 50 percent of the germs on its surface. Solution: Before you go full-on Howard Hughes and start wearing cardboard tissue boxes on your feet and all, know that using hand wipes or sanitizer makes viruses spread to 60 percent fewer surfaces.

YOUR OPEN office PLAN IS STRESSING YOU OUT

Well, at least you have your super-hip, ultra-modern open plan office that fosters teamwork and stuff, right? WRONG! Not only are open plan offices reported to create distraction, and lead to more superficial relationships between co-workers, they are actually so stressful that they can decrease your motivation. A study in the Journal of Applied Psychology found that a group of clerical workers exposed to the sounds of a typical open plan office gave up on a challenging cognitive task much more quickly than those who had been permitted to spend three hours working in silence.Solution: The same study found that using headphones to listen to music or block out sound corrected most of the problems the open office plan created.

... and STRESS INCREASEs YOUR CHANCES OF DEVELOPING A CHRONIC DISEASE

That stress you feel from working in that open plan office? It won't just affect you in the moment, either. Even if you quit your stressful, open-plan, norovirus-filled office job for a life of surfing, tanning, and quiet spiritual contemplation in Maui, you're still on the hook: Stress's negative health effects, like heart disease, last for more than 10 years after a stressful period of your life. A study from Penn State University found that people who were overwhelmed with stress by daily worries suffered ill effects from their stresses more than a decade later.Solution: Experts recommend all the usual suspects for decreasing office stress: meditation, exercise, yoga. Also, it doesn't say "drink half a bottle of wine while watching American Horror Story" on there, but based on some rudimentary tests I've been running on myself, it seems to work!

Just in case you've run out and purchased a treadmill desk, non-fluorescent lights, and a calorie conscious lunch and were feeling kinda smug about it ... sometimes, at work, you just fall down. White collar offices were the site of more than 80,410 on-the-job injuries in 2008 —25,790 of which were just caused by someone tripping and falling. In fact, the National Safety Council claims that you're 2.5 times more likely to suffer a serious fall at work than anywhere else.Solution: Dig a large hole, crawl inside it, and wait for somebody to invent a less toxic workplace. But, uh, try not to multi-task while you're in there.