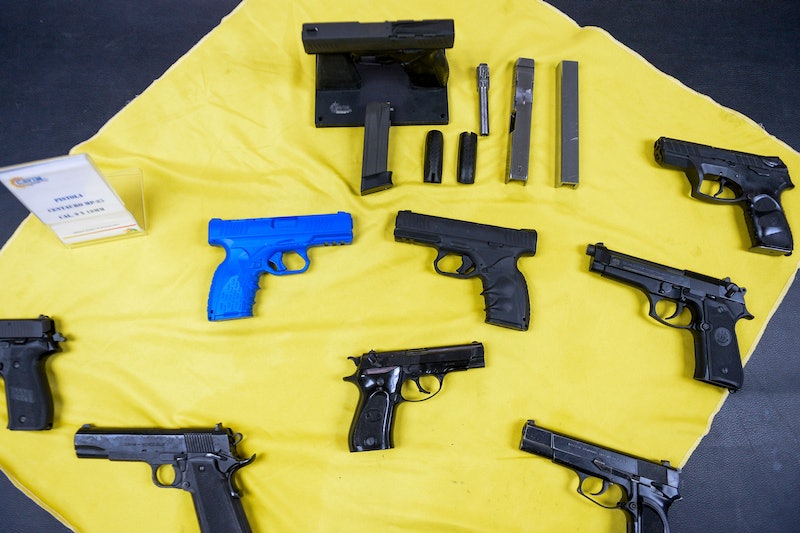 In most political arenas, the newly-announced Supreme Court nominee is considered a moderate, but Merrick Garland's views on gun control veer to the left. His decisions could certainly be described as liberal — however, his opinions in a handful of gun control cases were shared by both liberal and conservative judges alike. In a CNN interview that aired on Monday, Obama revealed that he was prioritizing "consensus candidates" while narrowing down his list of potential appointees:

It is my intention to nominate somebody who has impeccable credentials, somebody who should be a consensus candidate, is deserving to be on the Supreme Court, and I will continue to challenge the Republicans in the Senate who suggest somehow that they don't have to do their job in providing that the nominee hearing and a vote.

At that point in time, it became clear that Antonin Scalia's chair would be filled by a somewhat moderate candidate who could garner support from both the Democrats and Republicans. In many ways, Garland is that ideal contender. When it comes to guns, the judge is undoubtedly more left-leaning. But defining the line between moderate and liberal gun control views isn't always that simple.

Second Amendment advocates are up in arms (pun intended) over Garland's 2007 vote to reconsider a D.C. circuit court decision that would ban individuals from possessing handguns. While considering this, it's important to remember that this ruling happened almost 10 years ago. As stricter gun laws become a greater possibility in recent months due to America's mass shooting epidemic, conservative politicians have become increasingly lax in their gun control views to counteract the scare and assure gun enthusiasts that owning guns will remain one of America's "freedoms." Though his decision certainly doesn't match today's definition of conservative, those who use it to dispute Garland's moderate record won't tell you that, in reality, he wasn't the only Republican judge who voted in favor of the case being reheard.

In 2007, four judges voted to rehear the case Parker v. District of Columbia, and the votes fell symmetrically along party lines. Two of the judges were Republicans and two were Democrats, suggesting that at the time, the issue was somewhat bipartisan. Conservative Judge A. Raymond Randolph, a George H.W. Bush appointee to the D.C. Circuit, shared Garland's opinion.

Obama's previous two Supreme Court appointees, Sonia Sotomayor and Elena Kagan, were inarguably more liberal than Garland ever will be. The president's appointment of a moderate reflects how crucial it is to receive confirmation from both the Republicans and Democrats during this time in history, when political decisions often come to a deadlock. Though Garland's views on gun control have been liberal in the past, his history on the matter doesn't offer enough information to accurately predict how he will vote in Supreme Court decisions. President Obama praised the new Justice in the Rose Garden on Wednesday:

I’ve selected a nominee who is widely recognized not only as one of America’s sharpest legal minds, but someone who brings to his work a spirit of decency, modesty, integrity, even-handedness and excellence.