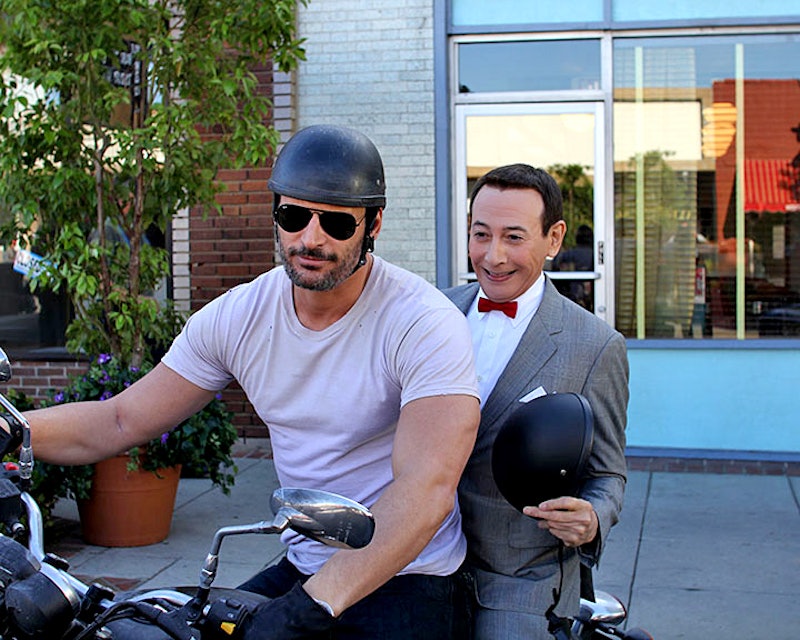 Pee-Wee Herman is back. Paul Reubens' manchild is starring in his first feature film since 1988's Big Top Pee-Wee. The new film is set to premiere on Netflix on March 18, and by the looks of it is hoping to recapture whatever lightning in a bottle Reubens caught with his first and most-lauded Pee-Wee film: 1985's Pee-Wee's Big Adventure. The new film has a similar plot in that it takes Pee-Wee out of his comfort zone and puts him on the road, but instead of trying to track down his stolen bike, this time he's taking his first ever holiday. The trailer looks pretty funny, but in this day and age of long-overdue comedy sequels, fans are wondering what celebrity cameos Pee-Wee's Big Holiday is going to feature.

And when you think about it, who could blame them? After nine years, Anchorman 2 managed to squeeze in Will Smith, Jim Carrey, Kanye West, Harrison Ford, Tina Fey, and Amy Poehler, among others. After a 15 year gap, Zoolander 2 upped the ante with Justin Bieber, Benedict Cumberbatch, Katy Perry, Ariana Grande, Sting, John Malkovich, Kiefer Sutherland, and about two dozen more. So after nearly 30 years, you would think that Pee-Wee's Big Holiday would follow the trend and overstuff the new film with celebrities — but the opposite is true.

If the film's IMDb page and trailer are any indication, the new movie will be decidedly lacking in the celebrity department. The biggest name to be seen is Joe Manganiello, who actually has a significant supporting role and not a glorified cameo. The rest of the cast has some vaguely familiar faces, but no huge names. Arrested Development's Alia Shawkat is there, along with Brooklyn Nine-Nine's Stephanie Beatriz. Manganiello's former True Blood co-star Tara Buck is also in the film, as is Scream veteran David Arquette. None of these actors approach the level of say, a Justin Bieber, but don't get me wrong... That's a good thing.

A big criticism of these celebrity-filled sequels is that they're too, well, celebrity-filled. Zoolander 2 was savaged by critics, and one of the biggest complaints was that the film was so concerned with stacking its roster with big names and familiar faces that Ben Stiller and company forgot to make the movie funny or good. The fact that Pee-Wee's Big Holiday seems to be eschewing the big names and gimmicky cameos in favor of keeping the focus on its main character and trademark humor should be a welcome change of pace for comedy fans, and could signal a new direction for long-gestating comedy sequels in the future.