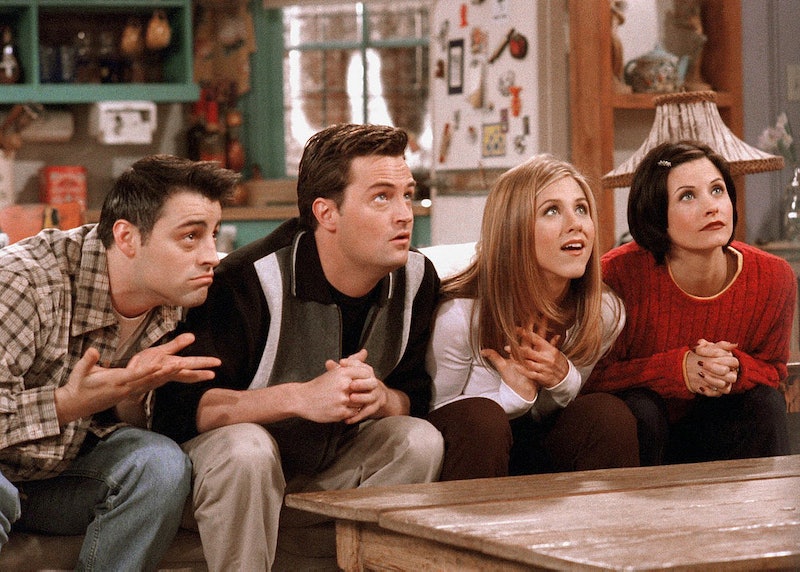 It happens with pretty much everything in my life: After enough time of listening to the same song over and over again, or having the same thing for lunch every day of the week, eventually I get sick of the repetition. Eventually, I need a break or a change of scenery. But the one thing that I never get sick of in this life is watching Friends episodes, because I could watch that show again and again.

You mark my words: If I were stuck on a desert island with only one thing to watch on repeat for the rest of my life, I would show up on that shore with all 10 seasons of Friends in DVD form clutched tightly to my chest. Because no matter how many times I watch that show — no matter how many marathons I host — I will never get sick of watching Friends. There is no season I wouldn’t watch, no episode I wouldn’t laugh at. That television show is my lobster: the thing I choose to love for the rest of my life, for the rest of eternity.

And I have some pretty good reasons for it.

1. Because The Jokes Are Totally Timeless

2. Because The Older I Get, The More Perspective I Have On Their Situations

When Rachel turned 30 and freaked out over her “timeline?” I totally get that in a way I definitely did not when I was 14 years old and watching that for the first time.

3. Because I Can Always Remember What It Was Like Watching It For The First Time

I even remember the ads leading up to the premiere. It was the show everyone wanted to watch that season, and laying on my living room floor and watching it for the first time is still one of my most vivid memories.

4. Because It Defined A Generation

It’s what everyone talked about on Friday morning in school and at work. The plotlines, the twists, the hairdos. It was iconic, and I love reliving that every time I watch.

5. Because Those Fashions Are So Fun To Relive

The Rachel? Monica’s vests? Ross’ leather pants? Those bring me right back to the ‘90s every time.

6. Because It Feels Like Hanging Out With An Old Friend Every Time I Turn It On

The kind of friend who you don’t have to play catch up with or pretend like you care when they tell you they got a new cat.

7. Because The Theme Song Brings Me Right Back

8. Because It’s Crazy To See How Much Time Has Changed

As timeless as this show is, there are still plenty of things that have changed in the 20-ish years since it premiered. Like cell phones, for instance. Imagine how much that would have changed these friends’ lives.

9. Because It’s Fun Picking Out People Who Became Super Famous Later On

Paul Rudd. Reese Witherspoon. Some of the guest stars on this show ended up being wildly famous after the show ended.

10. Because There Is Always Something I Missed

A new joke here, a killer line there. With 10 seasons and well over 200 episodes, there is still plenty in the Friends vault that I haven’t noticed, and I love picking those things out every time I watch.

11. Because Those Cameos Are Like One Big Time Capsule

It’s like one big ‘90s love fest in there. With Jean Claude Van Damme and Julia Roberts, this show got some of the biggest names in the business to star on their show at its peak.

See what I mean? There are so many reasons to watch Friends over and over again. Now, if you’ll excuse me, I have a serious Season 3 marathon queued up and ready to go.

More like this
Courteney Cox & Laura Dern Proved Their BFF Status With Matching Tattoos
By El Hunt
This 'Gossip Girl' Wardrobe Error Has Gone Viral On TikTok
By Alyssa Lapid
All The ’70s Easter Eggs You Missed In 'That ’90s Show'
By Grace Wehniainen
At 28, Debra Jo Rupp Was Living A Much Different '70s Show
By Grace Wehniainen
Get Even More From Bustle — Sign Up For The Newsletter
From hair trends to relationship advice, our daily newsletter has everything you need to sound like a person who’s on TikTok, even if you aren’t.