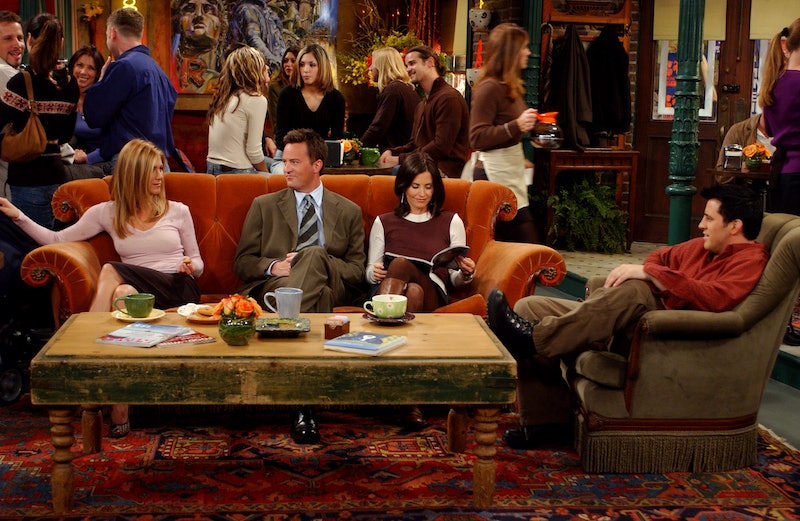 Now that the entire series of Friends is available on Netflix to stream, many fans have been led to discover small details about the show that may have previously gone unnoticed during their original telecasts (and subsequent TBS reruns, because let's be real: We all watched those a lot). For instance, the fact that Rachel actually wore a Central Perk uniform for the entire time she worked there! If anyone noticed it before, it definitely wasn't common knowledge until recently. It's small details like this that make me love the show even more than I already do, really — and makes me wonder what else has gone unnoticed in the background.

During a recent rewatch/bingewatch session, I found myself wondering about one of those details. As a New Yorker myself, I can attest that it's very common knowledge that, just because you were able to secure a couch or certain table at a neighborhood coffee shop a few times definitely does not mean you will always be able to secure that couch or table. New York is a busy city with a lot of people! It's just unrealistic to expect that your spot will always be free when you walk in to an establishment.

So... how was the couch at Central Perk always free for the gang?

A few more episodes, and I had an answer in the form of a previously unnoticed background prop, right in front my eyes: Turns out, the couch is reserved, guys.

If you haven't noticed it before, don't feel bad — after all, the show ended in 2004, and I'm just now noticing it myself! But it does make a lot of sense, when you think about it: Most of the gang lived right upstairs, and Rachel worked there for a lengthy period of time, so they were clearly all tight with the owner and various employees. Though there were certain episodes that joked about the couch being occupied by other patrons (one gag included the gang walking in to see the couch occupied by a set of friends who looked just like them, and another gag involved a pair of bullies stealing the couch from Ross and Chandler), for the most part, it was always reserved. This happens sometimes at neighborhood establishments around the city: I myself have seen a few instances — mostly in Brooklyn, which is basically the '90s Greenwich Village of today — where regulars (who have frequented the place for years, generally) have their own reserved spots, sign and all.

Anyway, need proof? Once you see it, it's sort of difficult not to see it during most episodes where the coffee table is visible. Just take a look at this screenshot from a random episode early in the series:

See it? Just in case, here it is indicated:

And there it is, hiding on the coffee table right in front of Chandler and Joey. How sneaky! Here it is in a few other episodes as well, over the course of the series:

In one instance, with Rachel and Phoebe...

In another, with the whole gang...

And it's even here, with Rachel, Monica, Chandler, and Joey...

...hiding behind the napkin dispenser.

So, there you have it — that is why the couch at Central Perk was always (well, most of the time) unoccupied for the gang. Mystery solved, folks.

(On another note, do I watch too much Friends?)

More like this
24 Years Ago, 'Friends' Dropped Its Most Underrated Ross & Rachel Episode
By Grace Wehniainen
Netflix Reveals First Look At Wednesday In The 'Addams Family' Spinoff Series
By Bustle Editors
What Does Nancy Jo Sales Think Of 'The Real Bling Ring'?
By The Editors
12 ’90s Movie References You Missed In 'Do Revenge'
By Radhika Menon
Get Even More From Bustle — Sign Up For The Newsletter