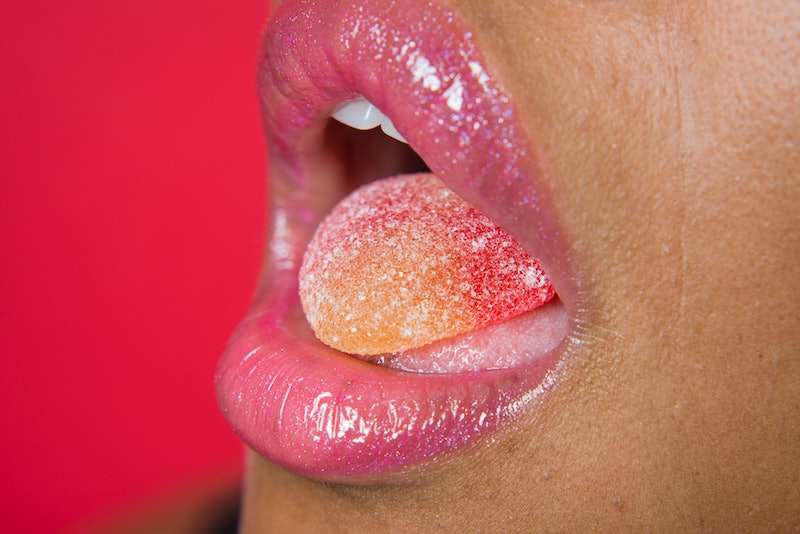 Like many of us, I grew up believing that when I experienced food cravings, it meant that I was deficient in certain vitamins. I am personally bedeviled by near-constant cravings, so I was long convinced that I must be so vitamin-deficient that my body was probably on the verge of shutting down (possibly in protest of my truly alarming processed cheese cracker consumption habits). However, if you think about it for a minute, that idea that you crave what you need doesn't really hold up. If your body craved the nutrients it requires to run properly, why do we fiend for sugar so badly that we'll fish a half-eaten donut out of the trash? Research backs this up. As Karen Ansel, MS, RD, CDN, told Huffington Post, "If cravings were an indicator of nutritional deficiency, we'd all crave fruits and vegetables ... The fact that we all want high carb, high fat comfort foods, along with the research, is a pretty good indicator that cravings aren't related to deficiencies."

So if your body isn't experiencing a critical cupcake deficiency, what's the actual cause of food cravings? Recent research on the subject proposes that food cravings are often less about what is going on inside your body than what is going on inside your brain. We typically crave foods because they stimulate the release of certain brain chemicals that change or balance our moods when we're feeling sad, stressed, or tired. That said, there are some physical factors at work, too. Sometimes, when we crave a certain food, it may potentially have to do with a certain mineral or vitamin deficiency, or an illness. But typically, there's more to it than that — our cravings provide a window into our mood patterns and emotional struggles, in addition to an excuse to declare nine snack-sized bags of pretzels "dinner."

Here's what five different common food cravings are really about.

What You're Actually Craving: Happiness, energy

Sugar can cause our brains to release serotonin — a chemical which makes us feel relaxed and plays a role in regulating mood. We stuff our snack-holes full of candy when we're stressed or sad because it can put us a little more at ease. (This also explains the stereotype of women being obsessed with chocolate while dealing with PMS. The sugar in chocolate may be helping us cope with the depression that many of us experience in the run-up to our periods, though the association between chocolate and PMS is also likely the result of cultural conditioning.) Additionally, most of us psychologically associate eating sweets with feeling better. As Kimberly Snyder, CN, told Everyday Health, "Most of us grew up with sweets being presented as a reward. The very anticipation of a reward triggers the neurotransmitter dopamine in our brain, and studies show that regular binging on sugar stimulates dopamine."

If you feel happy enough but are still mainlining brownies, it could also be a sign that you're not getting enough sleep. According to Shape, when we're tired, we sometimes crave simple carbs like sugar because they are "digested quicker than complex ones such as whole grains and beans, so the energy kicks in sooner." Though you are probably conscious of the times you head for a fistful of candy because you went to bed too late the night before, keep an eye out for times when you have a sugar craving and a sense of tiredness that feels inexplicable — you could be spending enough time in bed, but getting low-quality sleep while you're there, and waking up tired anyway.

All of that said, there are a few health conditions that cause sufferers to crave sweets, most notably type 2 diabetes and polycystic ovary syndrome (PCOS). So if you're feeling constant cravings that are accompanied by symptoms of PCOS (irregular periods, unusual body hair growth, adult acne) or of type 2 diabetes (increased thirst or hunger, frequent urination, patches of darkened skin, blurred vision), check in with your doctor.

What You're Craving: Chips, pretzels, pizza, actual salt applied to other foods

What You're Actually Craving: Catharsis, water, minerals, salt (because you're addicted to it)

When I was a little girl, I was notorious among family members for ferreting out the salt shaker in any dining situation, filling my palm with sodium nubs, and proceeding to quietly lick the salt out of my hand like a tiny deer in an Urkel T-shirt and those sneakers that light up. My parents, due to either kindness or ignorance, never looked into finding out what the hell was wrong with me; if they had, they might have found that salt is one of the most confusing and contested cravings around.

Some experts think that when we crave salty snacks, we're most craving the crunch that comes with heavily salted products like chips and pretzels. Snyder told Everyday Health that we crave these foods when stressed out because "[c]runching down with your jaw is cathartic, almost like punching a wall." Others think that craving salty food is, counterintuitively, a sign of thirst. According to Elizabeth Narins on Cosmopolitan, "Thirst is often masked as hunger. So a craving for salt, which helps your body retain water, could mean you aren't drinking enough or you are losing water (through sweating, diarrhea, or vomiting) faster than you're ingesting it."

There are researchers who think we crave salt simply because, well, we're used to eating so much damn salt already. A Huffington Post article touted a 2011 study which found that "salt was not only addictive, but it also affected our brains in a similar way to being addicted to cigarettes or hard drugs." (The study yielded similar results regarding sugar).

And then there are folks who think those of us who are salt-crazy really are responding to a deficiency: Women's Health noted a link between low-calcium diets and salt cravings, and claimed that "[i]n animal studies, researchers have found that a lack of potassium, calcium, and iron causes test subjects to devour table salt."

As someone who spent her childhood salt-licking years consuming pretty much nothing but chicken nuggets and strawberry yogurt, I would frankly buy most of these theories. None of them provide too much insight into your state of mind, alas. But if nothing else, a salt craving might be a good reminder to stay properly hydrated and eat a few balanced meals (and, if necessary, punch a wall lightly).

What You're Actually Craving: Energy, calmness

You may not know that we process both candy and carbs (like white bread, white rice, "regular" non-whole-wheat pasta — aka "the most delicious carbs") in the exact same way. They all contain "simple carbohydrates," which differ from the "complex carbohydrates" found in whole wheat breads and pastas, legumes, potatoes, yams, and corn. According to Joseph Colella, MD at Cosmopolitan, "Once a starchy food gets past the back of your tongue, your body treats it the same way as sugary sweets." Which means that a bag of crackers over lunch has the same impact on your serotonin levels as that fistful of chocolate chips you had, uh, immediately before lunch.

So we crave the classic white bread carbs for the same reasons we crave chocolate, candy, or other sweets — we feel depressed, overwhelmed, emotionally exhausted, or physically exhausted (during the worst year of my insomnia, I have very little memory of eating any foods that were not wrapped in a flour tortilla).

And some researchers believe that our desire for foods that are dense with calories — be they pastas, candies, or nacho platters — are remnants of an earlier time, when human beings needed to hoard calories to engage in various vital caveperson-style activities (hunting, gathering, running away from predators, telling friends about how awesome you are at running away from predators, etc). Dr. Leigh Gibson, Reader in Biopsychology at Roehampton University, told The Daily Mail that "[f]rom an evolutionary point of view, junk food cravings are linked to prehistoric times, when the brain's opioids and dopamine [chemicals related to concentration and pleasure, which establish habits] reacted to the benefit of high-calorie food as a survival mechanism ... Today, we still have the same chemical reactions to these so-called hyper-palatable foods ... despite there being less of a nutritional need for them."

What You're Craving: Steak, burgers

What You're Actually Craving: Protein, iron, vitamin B

I had a friend in college who stopped eating meat for three weeks — an experiment that culminated in her waking up in the middle of the night, going to a fast food restaurant, and eating a burger in car while in a semi-fugue state. She told me that she felt helpless against her cravings; I believed she was lying to me, and had just been trying to get out of participating in a vegetarian potluck I was organizing. But I may have been too rough on her — many doctors agree that meat cravings can be a sign of a protein deficiency, as well as a lack of iron or vitamin B in one's diet.

However, if you're a vegetarian, do know that feeling a meat craving doesn't mean that your only option is hauling over to the drive-in window and eating a burger while huddled in the street like some common rabid raccoon. You can also take that craving as a sign to introduce more of those vitamins and proteins included in meat into your diet by eating more nuts, tofu, and dark, leafy vegetables. And for the record, my vegetarian potluck was lovely (we had some eggplant stir fry and watched The Big Lebowski).

What You're Craving: Pizza, milk, a wad of cheese the size of your skull

What You're Actually Craving: Relaxation and/or vitamin A or D

Though a craving for dairy sweets like ice cream probably just means you're craving sugar, and a craving for cheese or milk may just have to do with the responses we have to high-calorie food noted above, some medical professionals think that a milk craving is really a craving for L-tryptophan, which releases our old friend serotonin, as well as another soothing brain chemical called choline. Some doctors even think that dairy cravings could point to a deficiency in vitamin A or D. Finally! A certified medical reason to purchase quesadillas.

So if you feel a cheese craving, should you try to suss out what's stressing you out, or just work on your night cheese? The call is obviously yours and yours alone. I'm certainly not saying you shouldn't eat candy when you feel sad or white bread when you feel dead on your feet — that's your god-given right! But when you feel that if you don't get some gummy worms in you right now, YOU WILL DIE, it might also be a sign to take a second and think about what's making you feel so crappy. Though gummy worms are truly fantastic, we have yet to engineer ones that will tell your parents to stop being super-judgmental or confer with your supervisor about reducing your workload. So the next time you get a craving, no matter what you decide to actually eat, take it as a sign to stop and think about how to make whatever is bugging you in life a little less awful.