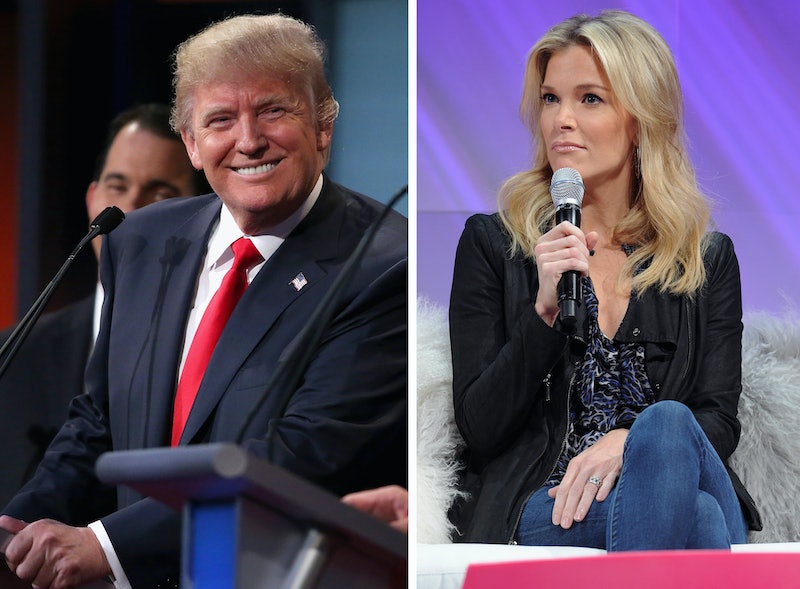 Donald Trump, a man who in addition to being “the least racist person that you have ever met," has once again slipped up (to our shock!) and used some not-at-all-good language to describe women. One woman, actually: Megyn Kelly. You know her and you know the routine. We have been here before. In a string of tweets calling the Fox News anchor “crazy,” the Republican front-runner ripped off whatever scab had covered the so-called "feud" between the two since they appeared on the debate stage together March 3. And it proved, once again, Trump has major insecurities with women.

“Crazy @megynkelly is now complaining that @oreillyfactor did not defend her against me,” Trump tweeted Thursday morning. “[Y]et her bad show is a total hit piece on me. Tough!”

“Crazy,” like its relatives “nagging” and “shrill,” is one of those words that some try to argue is ungendered but has long been used as an easy way to dismiss a woman’s perspective. Trump’s “crazy” comments dovetail fittingly with a new Reuters poll, which shows a rising number of American women don't think Trump is good for them. While 40 percent of women polled gave a “very unfavorable” view of the celebrity billionaire last fall, this survey, taken in the first half of March, showed that rise to 50 percent.

You can kind of take your pick as to why that is. Historically antagonistic toward women (remember his infamous feud Rosie O’Donnell), the last six months have seen Trump attacking other high-profile women like Kelly, Hillary Clinton, and Carly Fiorina. Plus, in the past, he's done his fair share of weird things, like gushing about how hot his daughter, Ivanka, is. "I’ve said if Ivanka weren’t my daughter, perhaps I’d be dating her," Trump once said. For a full recap of his creepy comments towards Ivanka, enjoy below:

For what it’s worth, I do not believe Trump really harbors a barely contained desire to have sex with his daughter. I just think he evaluates a woman’s worth based primarily on her looks.

I also think that he is a very insecure man. When talking about the people he surrounds himself with — like his daughter — he is so overcome with the need to impress that bragging about her bangability is the only way he can think of to communicate her value, and so, by extension, his.

Likewise, when threatened by a woman, Trump tries to take her down the only way he knows how — by going after her looks and by using gendered language that dismisses her not just as a person, but specifically as a woman. His frequent return to Kelly, whom he has also referred to as “average in every way,” is a sign that he doesn’t really know what to do about her — she’s wildly popular on Fox, and people listen to her. Kelly herself has cautiously gone on record about Trump’s attempts to “woo” her. In an interview this year with Vanity Fair, Kelly said:

He [Trump] would send me press clippings about me that he would just sign "Donald Trump." And he called from time to time to compliment a segment. I didn’t know why he was doing that. And then when he announced that he was running for president, it became more clear. But I can’t be wooed. I was never going to love him, and I was never going to hate him.

Draw your own conclusions from that, though I think including this GIF for reference here is not unwarranted:

I believe this latest mini-tweetstorm is more indicative of Trump's insecurity than his belief in any actual “craziness” on Kelly’s part. So, to wrap this up I’m going to leave you with what are possibly the truest words ever written about Trump, from The Atlantic's Conor Friedersdorf:

Trump is unfit to be president because he has no experience in government; because he cynically stokes xenophobia for political gain; because he has given voters every reason to believe that he would put his own selfish interests above the country’s interests; because he has demonstrated no firm grasp of public policy in any area; and because his boastfulness, bombast, and petty insults are signs of insecurity, not confidence. It would be dangerous to put such an apparently insecure man in a position of power.

You don't have to like Megyn Kelly to see that one side of this battle is being handled more maturely than the other — and with a lot less insecurity.