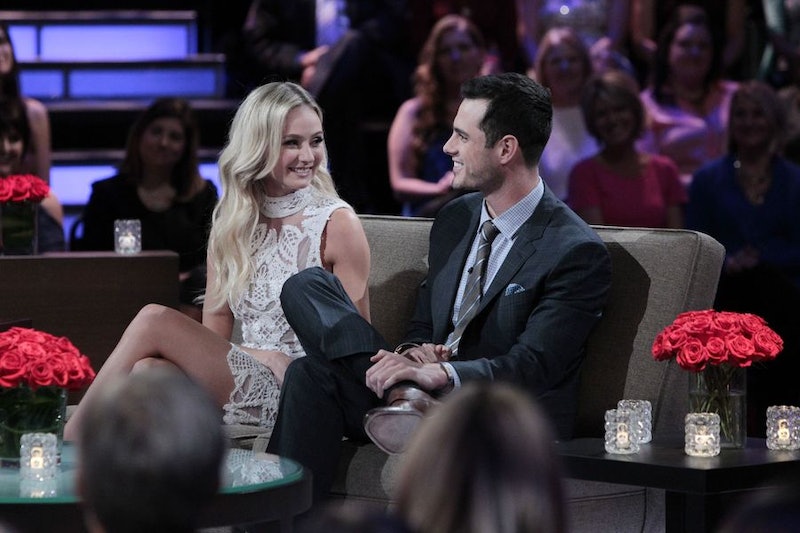 It's been less than a week since The Bachelor season finale, and that means for the first time in almost four months, Ben Higgins and Lauren Bushnell are finally able to take their relationship public. So obviously, it makes sense that they want to do things that normal, non-reality TV couples do, like actually go on dates out in the real world, and they've already gotten started. On Wednesday night, Higgins and Bushnell went on their first official date, and from their Instagram posts, it sounds like it was an amazing night. Dinner at NYC's Landmarc restaurant, meeting chef Marc Murphy, champagne... what's not to like? There's only one problem: They wanted this to be a "normal," non-Bachelor-y date, and they kind of failed at that.

Don't get me wrong — fancy, romantic restaurants are obviously the ideal date atmosphere, but if this is their attempt at being regular people, they missed the mark. Before they headed out for the night, Bushnell tweeted that it wouldn't involve any of the usual Bachelor conventions like helicopters and hot tubs that tend to appear in dates on the show. But expensive food at a place that serves an appetizer called "roasted marrow bones" that they charge $20 for followed by a meet and greet with the guy who runs the place is actually exactly what they'd do during a one-on-one on The Bachelor, but there'd be that awkward date rose waiting on the table at the end of the night.

Like, look at this. Look how beautiful this is.

As someone whose current date nights with her fiancé include takeout sushi and watching old episodes of Cops on the couch, I think I could teach these two a lesson about what "normal" dates are like. Higgins and Bushnell, if you want to go on a date like regular, engaged people, here's what you have to do.

Like Chili's, where you can look at the menu and conceivably understand what each menu item is without having to ask someone. Best part is, you can show up in Nike shorts and nobody cares. Also, I'm a big fan of anywhere that lets you draw on the table cloth with crayons or throw your peanut shells on the floor.

Watch TV Instead Of Being On It

Not that I'm complaining, but Higgins and Bushnell have been all over my TV this week. It's totally expected, considering the finale only aired Monday. But a lot can be said for a Netflix account and a full DVR. And the couch. The couch is a beautiful place where nothing bad ever happens.

I googled that champagne on the table, and it's $50 a bottle. Nowhere near the most expensive you can get, but still more than us regular folks would spend. When has a $7 bottle of wine ever done anybody wrong? Or even grab a six pack of beer, if you're feeling extra casual.

Don't Involve Chris Harrison (Or Anyone Else)

He wasn't on this date, but his presence has been felt on all of their other ones. I like the guy, but he's made a career out of being a professional third wheel. And if we're keeping special guests out of these dates, this means no more chef visits. Unless they go to one of Gordon Ramsay's restaurants. I would eat bone marrow if it meant I could meet Gordon Ramsay.

So far, Higgins and Bushnell aren't the best at being normal, but it's not like that's a bad thing. After all, who is? And if they want to keep going on fancy dates, I will keep double clicking their photos on Instagram. They're adorable just the way they are, bone marrow appetizers and all.