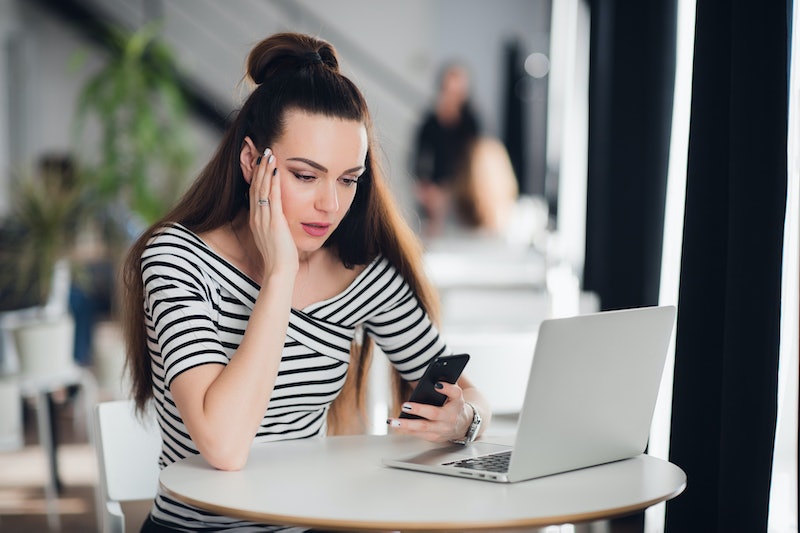 If your Internet connection is unreliable and your stress level is elevated, the two things might have a lot more to do with one another than you think. A new study says that slow Internet speeds do cause stress — something that sounds weird, but that anyone trying to cope with terrible broadband speeds could probably have intuited already. Basically, slow Internet is the worst. Officially.

According to a new report from mobile broadband company Ericsson, even minor delays in Internet speed can cause your stress level to spike. Researchers discovered this lovely fact by monitoring participants' heart rates while they watched a video on YouTube. A single, two0second delay in starting the video could cause a person's heart rate to accelerate an additional three percentage points, compared to someone who experienced no delay. People who experienced a six-second delay saw their heart rate go up by an extra six percent compared to the no-delay group. And if there are multiple delays, things get even worse: People who also experienced a pause in the video once it had already started saw their heart rate go up an extra 15 percent.

In other words, having the Internet short out on you causes your body to exhibit a stress response. In fact, the increase in heart rate caused by delays was comparable to the increase people experience watching a horror film. So if you're trying to relax by watching a video, make sure your Internet connection can handle it, because otherwise this will be anything but relaxing.

So why is this? Why does slow Internet have such a huge effect on our stress levels? Well, the report doesn't speculate, but my theory would be that it's because we rely on the Internet for so much, and because we are so emotionally invested in everything we do using the Internet. We kind of need the Internet to work the way it's supposed to in order to accomplish even the tiniest tasks. When it slows down and we can't do things efficiently, that's both frustrating and stressful, in the same way that not being able to do something offline that you're normally able to accomplish with ease would be frustrating and stressful. And if you use the Internet for work or school, malfunctioning Internet can get in the way of your responsibilities.

Plus, if you'll allow me to get existential for a moment, there's also the fact that computers are designed so that they kind of feel like extensions of ourselves. You can see it just in the way we talk about them. You don't "use a computer" anymore, you "do things on the computer." You don't say you'll "type something" so much as "write something." You don't think of Googling as something you tell a computer to do, but something you do. So when the process starts to break down, when the Internet isn't working the way we think it should, it feels like something is going wrong with ourselves.

So it makes sense our instinctive reaction would be a stress response.

My overall takeaway from this? For the health and mental stability of Americans everywhere, the government should really be providing us with free, reliable, high speed Wi-Fi. It's really in the country's best interest.

More like this
Here's How To Get Your iPhone To Update Automatically Forever
By Emma Carey
Why Everyone Is "Soft Tagging" Friends On Instagram Right Now
By Alexis Morillo
This Psychological Effect Might Be Keeping You From Hitting Your Goals
By Lexi Inks
19 Latinx Therapists & Mental Health Experts To Follow On Instagram
By Kaitlyn Wylde, Naydeline Mejia and Lexi Inks
Get Even More From Bustle — Sign Up For The Newsletter