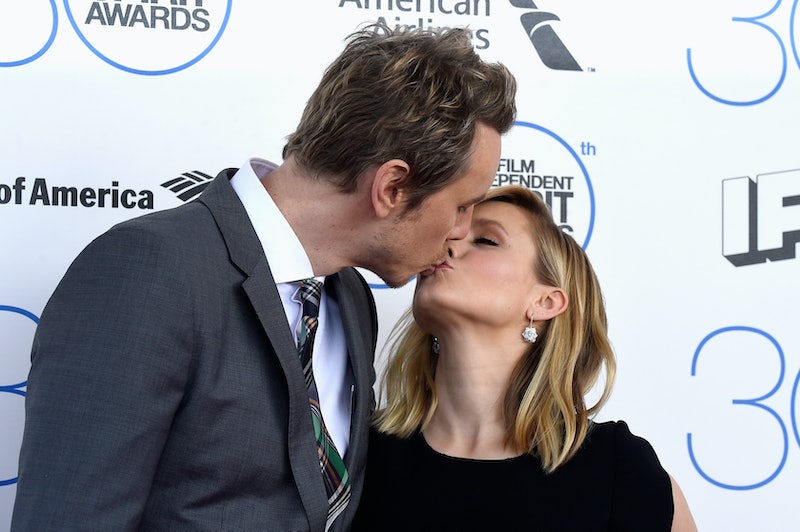 From a distance, The Boss star Kristen Bell has the perfect marriage. Ever since she wed Dax Shepard three years ago, fans have delighted in the couples' adorable, often viral displays of affection. For her 31st birthday, Shepard surprised Bell with news that a sloth (her favorite animal) would be making an appearance at her party. He captured her reaction — disbelief and ecstatic blubbering — on camera for the world to see. It was an incredibly sweet look inside the pair's private life, and one that first earned the couple the label (and hashtag) #relationshipgoals. Of course, their charming antics didn't stop there.

Since then, the pair has taken to social media to declare their love time and time again. When a fan on Twitter asked Bell what life moment she'd like to repeat, she responded "moment i promised myself to @daxshepard1. best decision ive made 2date." Most recently, Bell and Shepard vacationed in Africa, using their free time to create their own version of Toto's music video for "Africa." The video has already racked up over five million views, and it's predictably perfect, but according to Bell, her marriage with Shepard is not.

"It's not utter bliss. We should remind the world that we do fight," she says when I ask what it's like to embody #relationshipgoals. "We love each other to the moon and back, but we do have a lot of road bumps."

Of course Bell and Shepard, like any and every couple, have their hard times. They might be beloved stars, but Bell's candidness confirms that their relationship is normal. So what's the secret to a happy marriage, despite occasional quarrels? According to Bell, it's something many couples take part in.

"We make funny videos like 'Africa' and the sloth, but we also go to couple's therapy because we disagree on 99.9 percent of issues. There are days when I'm completely sick of him, and there are days when he is completely sick of me. But we've chosen to love one another and to be a team," the 35-year-old mother of two tells me. "We've learned how to communicate and argue in a really healthy, respectful way."

Bell assures that having the hashtag applied to her marriage is "so, so flattering," but she also wants to hammer home that no relationship can be summed up in what you see in a four-minute home video. "I think there's a bit of personal responsibility. I need to remind people that you don't just find one person and then it's all peaches and cream for the rest of your life. Marriage and a relationship is hard work, and it's a lot of compromise. But if you compromise a lot, it's worth it, and you'll be able to make African vacation music videos."

Bell's honesty about her marriage, her and Shepard's struggles, and their love for one another has somehow made me appreciate and admire her (and them) even more. Almost as much as, let's say, an "Africa" sequel video. One day, right?