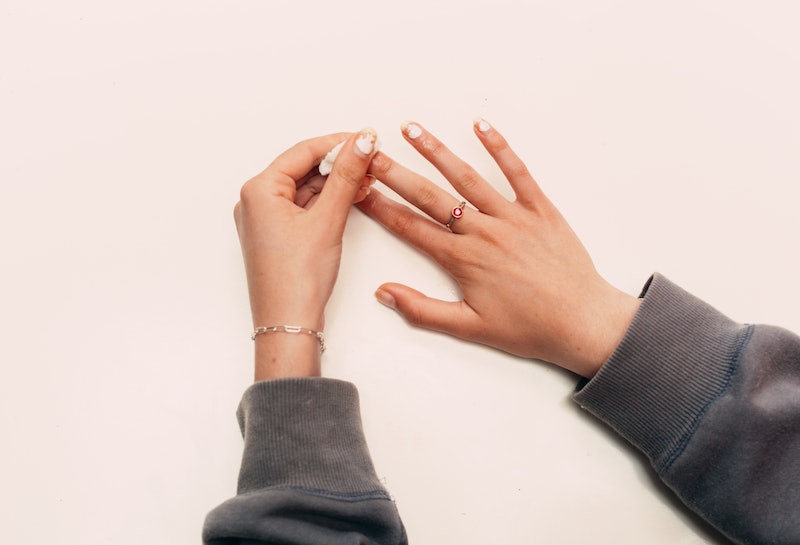 If you nails could talk, what would they say? Odds are, it would be something like "That gross-tasting anti-biting polish you got was clearly money down the toilet" or "Stop pushing your cuticles back with your bank card, we're totally going to accidentally damage the magnetic strip!" But sometimes, your nails have something more serious to tell you — because changes or damage to the nails can often be one of the first signs of a health issue, indicating anything from a minor vitamin deficiency to something serious.

Though you probably never stop and think about what your nails are made of (unless you are trapped in an exceedingly dull college lecture/dinner party conversation/time-share condo presentation), they're made of a protein called keratin — meaning that, much like your hair, your nails are an expression of how well things are going inside the body. And just as brittle hair that easily breaks can be a sign of health problems, so are nails that peel, snap, or have an unusual appearance. (Also like your hair, your nails are dead by the time you see them — but that's a topic for my next article, "Top 10 Dead Things That Are Currently Seeping Out Of Your Body.")

Many of us are so used to having our nails constantly painted, we might never think to check how the nail underneath is doing. But if you happen to catch a glimpse of any of the nail abnormalities below while changing polishes, cancel your trip to the manicurist and schedule a visit to your GP.

1. You Have A Slow Thyroid

Brittle nails can mean a lot of things — usually, nail weakness means that you're going a little too hard with your nail product regimen, or that you're overexposing them to harsh substances, like dish detergent. However, weak, brittle nails can also be a sign of hypothyroidism, a disorder that occurs when your thyroid is underproductive and not making enough of the hormones that your body needs. So if your nails have become extremely brittle, but you can't think of any external factors that could have made them that way — and if you're experiencing other symptoms of hypothyroidism, like unexplained weight gain, depression, and memory loss — make an appointment to chat with your doctor.

Pitting in nails — tiny, circular indentations all over the surface of the nails, as if they'd been poked with the pin — can be a sign of the skin condition psoriasis. Psoriasis most commonly manifests as skin lesions — sufferers generally have reddened, inflamed patches covered in dry skin on their bodies — but the disease can also damage the nails, and in some cases can make the nail fall off.

3. You Have An Autoimmune Disease

The "pitting" on the surface of the nail that we talked about earlier? It's not only a sign of psoriasis — it can also be a sign of certain autoimmune diseases, including alopecia, a disorder that can cause sufferers to lose their hair. If you see these indentations, don't just paint over them or try to file them away — make sure to get a professional medical opinion, to insure that they're not a sign of something way more serious than funny-looking nails.

Ridges that run the length of your nail are called Beau's lines. They are often mistaken for a sign of nail mishandling — you might think they're a sign that your manicurist applied your gels wrong or filed your nails too harshly. But these lines are actually a sign that your body has dealt with or is dealing with some kind of trauma.

Beau's lines on just one finger could be a sign of physical trauma — say, slamming that nail incredibly hard in a door, or hitting it with a hammer. But Beau's lines across all your fingers are either a sign of a past systemic trauma throughout your body (say, a long and intense fever) or an ongoing one, like untreated diabetes, malnutrition, or pneumonia. So if you notice them popping up, and you don't have an illness in your recent-ish past (Beau's lines take some time to show up, so you won't see them a week after your bad fever ends), talk to your doctor about what could be going on.

5. Your Nail Was Injured

If you've seen white spots suddenly turn up on the pink part of your nail, you may have gotten nervous — but this is actually one case where, typically, all your nail is trying to tell you is "I got hit." The technical name for a white spot on the nail is leukonychia, and all it means is that your nail experienced some physical trauma — like that you slammed it in a car door or accidentally whacked it while closing a window.

However, it should be noted that, in some rare cases, leukonychia is a sign of heart disease, renal failure, arsenic poisoning, or pneumonia. However, it is very unlikely that it will be your only symptom if you have any of these health problems — so if your only symptom is a white dot or two, odds are high that you just hit your nail by accident. There's nothing you can do to make leukonychia dots go away, but at least know that they're probably no reason to panic.

6. You Have A Vitamin Deficiency

Brittle, peeling nails can be a sign of a few things — as noted at the top of this piece, they're sometimes a sign of a thyroid disorder or exposure to harsh chemicals, and sometimes, nail brittleness is simply a sign of aging. However, brittle nails, or nails that break under very little pressure, can be a sign of a vitamin deficiency. Vitamin A plays a key role in the bodily processes that allow your nails to grow, so if your nails suddenly seem weak, a lack of vitamin A could be to blame. Vitamin C deficiencies can also sometimes manifest in brittle nails. If your nails are suddenly broken and flaky, go talk to your doc.

7. You Have Liver Disease, Cardiovascular Disease, Or Another Serious Illness

Usually, our nails only tell us small things — but in this case, your nails' message is serious business. "Clubbing" — when the end of the nail becomes curved and wide, typically on top of a fingertip that has also become swollen — can be a sign of liver or kidney disease, cardiovascular disease, a lung disease, or AIDS. Clubbed nails look very unusual, so you'll definitely notice if you have them — but if you do, do not ignore it or chalk it up to a superficial injury. You need to see a doctor, stat.

Like many of the nail abnormalities listed here, dark bands running from the top to the bottom of your nail often mean nothing. They're frequently a sign of a mole in your nail bed, or just some random pigmentation — but they can also be a sign of malignant melanoma, a very serious skin cancer. So while dark bands on their own are not a cause for concern, if they seem to be darkening, make a doctor's appointment to have them checked out.

9. You Have An Iron Deficiency

If your nails are "spooning," you've probably already noticed — spooning nails scoop upwards, like the spoon from which they get their name (or those tortilla chips that are specially designed to scoop up salsa). But you may not know what these nails signify, which is that something is seriously awry in your system. You may have an iron deficiency, or hemochromatosis, another iron-related disorder. They could also be a sign that you suffer from hypothyroidism, or even heart disease. So if your nails start curling — or otherwise looking weird — don't file and paint them and then hope everything goes back to normal on its own. Your nails are trying to talk to you, dude — the least you could do is listen to what they have to say.