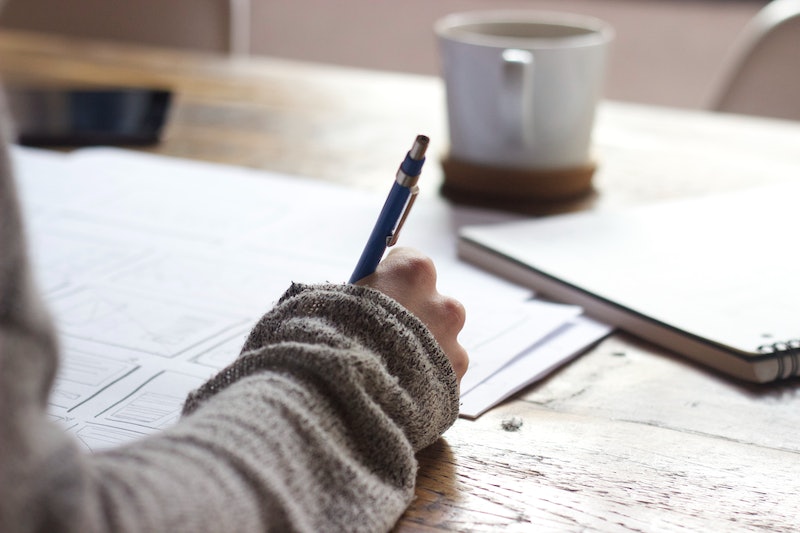 I have a degree in creative writing. And I'm pretty sure they won't refund me if I try to return it. So I have chosen to be proud of my degree. When I tell people that I majored in creative writing, though, I usually get a response that ranges from sympathy to out and out horror. People want to know why my parents allowed me, their only child, to throw away my future on a creative writing degree (but my parents are both professional actors, so they actually think of writing as a very solid and employable career path).

There's a lot of hate out there for creative writing majors. We're slightly more pretentious than English majors, and not quite as practical as Journalism majors. But any creative writer will tell you that it's a much more useful major than you might think: creative writing teaches you how to take criticism with grace, how to meet a deadline, and how to force yourself to write a poem at 3 am while crying. I would even argue that creative writing is an extremely employable major, especially if you aspire to work from home and never wear pants.

So don't despair, fellow creative writers (or do despair, if that helps your process). You're not alone in the struggle:

1. Explaining your major to strangers

It's hard enough trying to explain your major to friends, romantic partners, and elderly relatives. But when you try to explain to strangers that you majored in fancy lying, it's especially painful. They always look so confused. Or they assume that you're an artsy hipster who wears turtlenecks (and you are, but that's not the point). Sometimes you're tempted to say that you majored in English, just to avoid the inevitable look of concern.

2. Trying to find something nice to say about someone’s garbage poem

Just smile through the pain. I mean, yes, you should always try to give constructive feedback in a writing workshop, no matter what your personal feelings are. But... sometimes your classmates just keep writing misogynistic female characters, or really graphic poems about their S.O., or personal essays about how hard it was to grow up rich. And that's when you swallow your opinions and try to gently nudge them in a less terrible direction.

PRINTING. There's always a line at the printer in college. And you're always running late. And, if you're a creative writing major, you have to print twelve full-length novel manuscripts in five minutes, while everyone behind you in the printing queue becomes increasingly enraged. And then the printer jams. And everyone has to wait while you sacrifice a sheep to the printing gods (and never mind that you're using up the paper equivalent of a small forest even though it's the 21st century and people have laptops).

Nothing is worse than knowing you could have done better on your first draft. Because no matter how many times you tell your workshop that this draft is really rough, everyone will judge you and then you'll sink through the floor and/or spontaneously combust. You know that you're in school to "learn" and "improve your writing" and whatever, but why can't everything come out the way you want it to right away? Is that so much to ask for?

6. Sometimes you have to write a draft ten minutes before class

When you slave all week over a three line poem, it always comes out meh. But when you spend half an hour feverishly writing a short story before sprinting to class, it's somehow brilliant? At least, that's what it seems like in your state of over-caffeinated delirium. You never mean to end up dashing off a frantic draft on your way to class, but somehow all those hours of staring blankly into space and stalking your former roommate on Facebook caught up to you.

It's one thing when you're working on your novel and you get stuck on a chapter for a few days. But it's another thing when you have a story due at 10 am and it's 2 am and you have nothing. Your brain is just an echo chamber full of blank pages and a complete absence of thought. You'll probably never have another idea again. This is when you quit writing to go live in a cave for at least one semester, as all creative writing majors do.

8. Writing about real people can be risky

At most schools, creative writing is a fairly small major. So there will always come a time when someone in your class figures out that you're low-key writing about your ex, who is now dating their roommate's best friend. Or you'll realize that your friend's screenplay is literally just about everyone in your friend group, and then you'll feel super awkward trying to give feedback on your friends' actual real lives. Yikes.

9. Trying to plan for the future

Isn't it just HILARIOUS how everyone makes jokes about writers being poor and unsuccessful forever? It definitely NEVER gets old. But seriously, should you try for an MFA after college? Should you move to New York and sit in coffee shops all day? Should you try to get a job in publishing? Should you move back into that writer's block cave? There's not exactly a set path for a career in writing, so you're left to figure it out on your own (financial security is for squares, anyway).

10. Other majors just don’t get it

Being misunderstood is part of the whole creative writing deal. But that's ok, because you get to sigh and shake your head a lot while you contemplate how misunderstood you are. Really, though, just because other majors don't get it doesn't mean you're not doing the right thing. Your fellow writers understand you (even if they can be a little heavy-handed with the critique). And you probably wouldn't have been good at any other major, anyway. So don't feel bad that you're pursuing your dreams.

More like this
'Mayfair Witches' Already Changed 2 Major Characters From The Books
By Grace Wehniainen
Allegra Goodman Procrastinates By Reading Time-Management Books
By Samantha Leach
Prince Harry Incorrectly Recites Christina Aguilera’s “Genie In A Bottle” Lyrics
By Jake Viswanath
I Read Prince Harry's 'Spare' So You Don’t Have To: 11 Highlights To Know
By Marina Watts
Get Even More From Bustle — Sign Up For The Newsletter
From hair trends to relationship advice, our daily newsletter has everything you need to sound like a person who’s on TikTok, even if you aren’t.