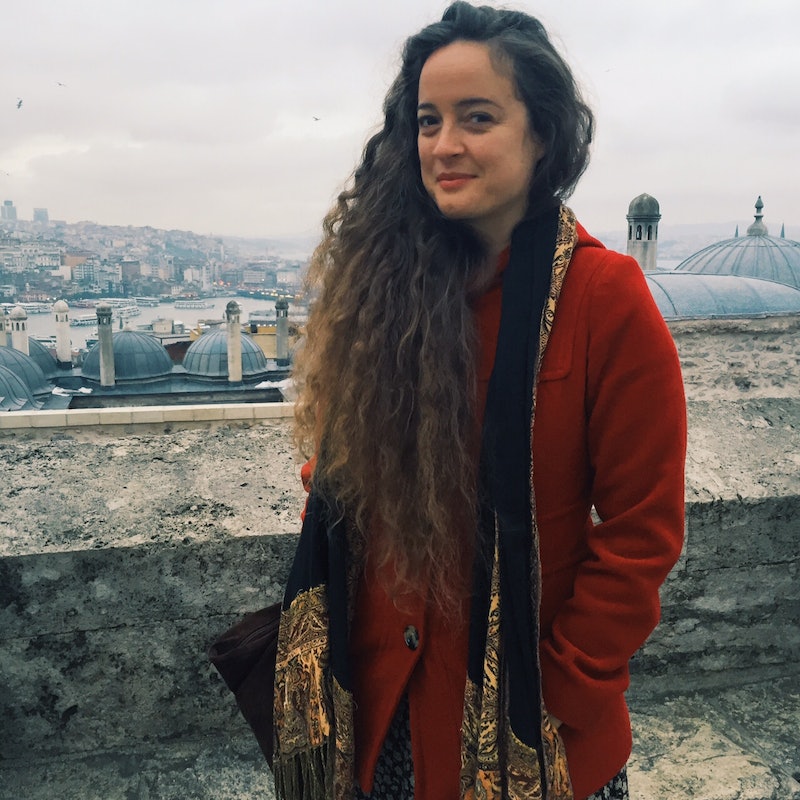 Millennials have a bad rep of frankly not giving a damn about things that aren't immediately in front of them. But for Chelsea Gökçay, the Syrian refugee crisis isn't a peripheral issue. Half American and half Turkish, the 30-year-old saw the humanitarian crisis unfold in her heritage country and knew she had to go to the front lines. Defying all stereotypes of the apathetic millennial, she returned to Turkey eight months ago to set up her own nonprofit, Hand Up Istanbul, that aims to not only help Syrian refugees, but also bridge the gap between two communities forced to live side by side like never before.

She strongly believes other millennials are more than equipped to join the cause.

"We're an incredibly educated generation, and we have better access to academic works, translated texts, and alternative news than the previous generation," Gökçay tells Bustle. "I believe our mastery of the Internet makes us ready to be participants in the struggle for social justice."

Gökçay is the founder and director of Hand Up Istanbul, which has around 16 people on staff, the majority of whom are in their 20s and 30s. Together, they help refugee children get enrolled in Turkish schools, provide Turkish and English language lessons, and build up relationships between refugees and local Turks by hosting literacy, art, and film workshops.

But the need for greater education goes beyond Turkey's borders as misconceptions about the refugee crisis are common. "People in the U.S. see the Middle East and the issues here as kind of like someone else's problem," Gökçay says.

She points to history, when colonial powers cut up the Middle East with no regard for how a mishmash of different cultures would create conflict within forced borders. U.S. intervention, like in the 1953 Iranian coup d'état that ousted the democratically elected Prime Minister Mohammad Mosaddeq, helped spur anti-Western sentiment throughout the region. And if you follow this trail of interventionist policies from the 20th and 21st centuries, you'll find scarred countries in the wake of conflicts like the Gulf and Iraq wars and end up where we are today: the looming threat of ISIS and the devastating impact of the Syrian Civil War on its people.

Another misconception is the belief that taking in refugees puts host countries at risk. As of late last year, the United States has accepted 784,000 refugees into its borders since 9/11 and just three were determined to have links to terrorism — an overall rate of 0.0038 percent.

You'd also probably assume a sudden mass influx of people would put a strain on a country's resources. According to the United Nations High Commissioner of Refugees, Turkey has 2.7 million displaced Syrians in its borders, making it the largest host nation of refugees in the world. But despite this boom in population, Turkey's economy has flourished. According to the Brookings Institute, Turkey has spent 5.37 billion euros since Syrian refugees first crossed into the neighboring nation, but "there is no indication that this spending has jeopardized the country's fiscal sustainability." The country's economy is expected to grow from 3 percent in 2015 to 4 percent in 2017the following year, according to the Organization for Economic Cooperation and Development.

Don't be mistaken: The refugee crisis is still a crisis. Escalating violence in Syria and elsewhere is forcing people to leave their homes. But the numbers prove there's no burden in extending a helping hand.

Gökçay says there are plenty of ways millennials, now the country's largest generational group, can get involved. Donating money, signing petitions, reading articles, sharing news on social media, talking to friends and family members — all of these are easy ways to mobilize for Syrian refugees at home. And if you want to follow Gökçay's lead and go overseas, there are lots of organizations in various countries that can help you make that jump. Small Projects Istanbul offers internships to teach Turkish to children while the most urgent needs in nearby Lesbos, a Greek island off of Turkey's western coast, are readily listed on Information Point for Lesvos Volunteers' website.

The choice is yours.

"When people start to understand in their minds, their hearts do," Gökçay says, "and that's so important because humans are such social creatures. That's where change starts."