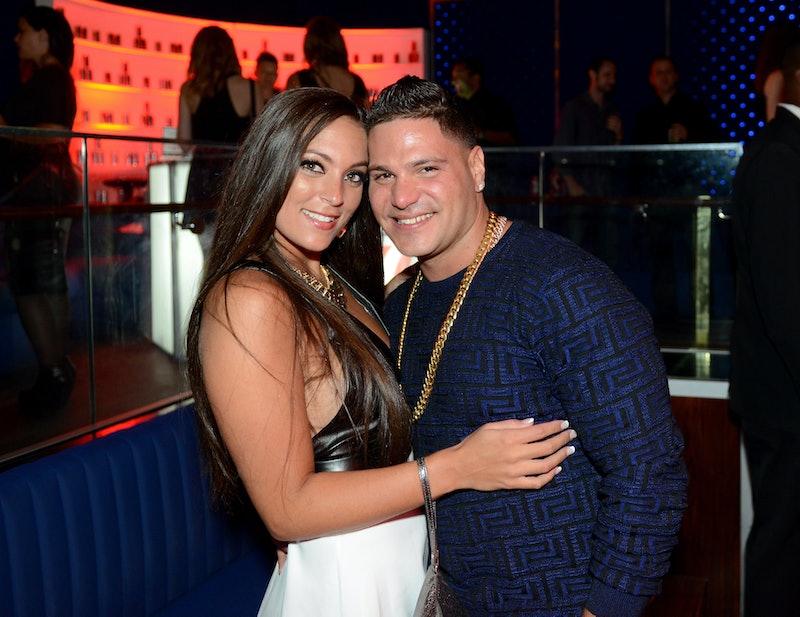 If you watched Jersey Shore, you just knew that Sammi Giancola (aka Sammi Sweetheart) and Ronnie Magro were one of those couples. And by "those couples" I mean the type that fight, break up, reconcile, and do it all over again, but never ever really let each other go — as Taylor Swift would say, like ever. Case in point, there have been rumors recently that Sammi and Ronnie are back together. I know, I know, it's time for a rewatch. I'm with you.

Bustle has reached out to reps for Sammi and Ronnie regarding the repots, but has not yet heard back.

But before we get to streaming, what prompted these rumors? Well, the Jersey Shore stars themselves, actually. Sammi celebrated her 29th birthday recently and did not do so solo. She posted an Instagram picture with Ronnie (and the rest of her crew) and the most interesting part, other than the fact that her ex was in attendance, was that he wasn't only celebrating with her, but he was also by her side.

An Us Weekly source said the two are "newly dating" and that they "are telling friends they have never loved anyone else since they broke up." Whereas E! Online's sources are telling two different stories. One source claimed, "They are seeing each other again, [but] taking it slower this time around. They were just in Mexico together as well. They have a lot of history," while another said they "were acting as friends" at the party and "are not dating."

Despite the conflicting stories here, I think I've figured it out. Here are some clues that prove the Sammi and Ronnie reconciliation rumors are true.

Sure, it was indirectly, but the sentiment was most definitely there. Why post the meme otherwise?

Their last Instagram posts are of their dogs, Franco and Louie, who happen to look extremely similar.

4. Their Jersey Shore Co-Star Shared A Pic With Them

And referenced one of their most romantic relationship quotes.

5. A Source Told E! Online They Were "Just In Mexico Together"

And as evidenced above, they have pictures at the same vacation spot, though not together. Not seeing the connection? Here's a picture of what appears to be the same balcony Sammi took her selfie on from the villa's Instagram account that Ronnie tagged:

While these photos are from different time frames (though, Giancola doesn't note if it's a throwback or not), it appears that they have at least stayed at the same place, which is interesting.

Sure, they're being a bit evasive, but perhaps they've gotten older and wiser and realized that the Internet doesn't need to know everything there is to know about them.