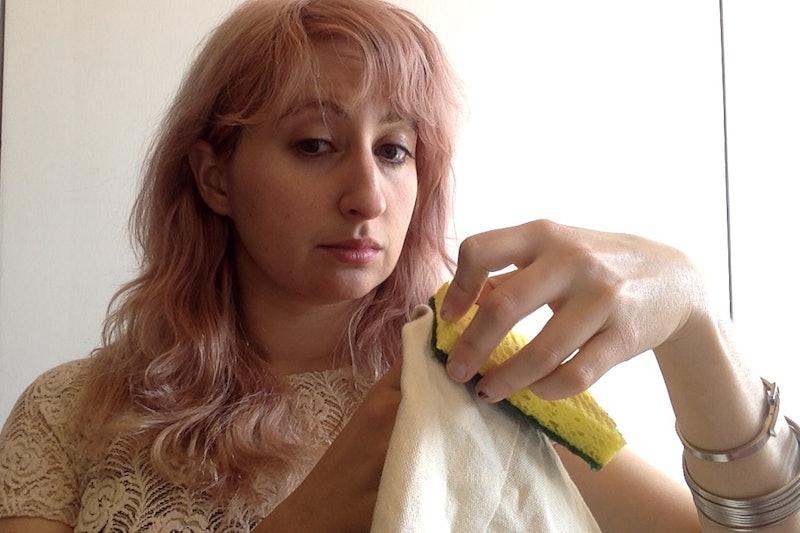 Almost as soon as I began my life as a menstruator, I picked up a side gig in trying to figure out how to get period blood stains out of... well, everything. During my first few years of having a period, I'd begin every month with high hopes about bleeding on my pad and only my pad this time, like the outstanding specimen of burgeoning womanhood that I was. I'd then end every month a little bit more disheartened about the fact that, due to a healthy mix of irregular periods, distraction, and denial, I seemed unable to avoid non-stop panty massacres. I spent my early teen years accidentally menstruating all over jeans, leggings, ballet tights, bathing suits, gymnastic uniforms, and special dresses worn only for bat mitzvahs. It was kind of like being Carrie, only without the fun psychic powers and all.

If you're wondering why period blood is so hard to get out of sheets, I asked an expert on your behalf. "Blood contains hemoglobin, which helps it to clot and seal wounds. This clotting ability also causes it to bind to fabrics," says James Porter, the facilities manager at Laundrapp, an app that picks up and delivers dry cleaning. "Furthermore, the stains on sheets/clothing can be made even harder to remove when left to dry or washed at high temperatures, although not impossible with the use of special solvents."

Hence, the existential crisis occasioned by getting period blood on sheets or elsewhere. Of course, I eventually learned that getting some period blood in places where you didn't intend is just part of having a period. I also learned that my mother's preferred method of period stain removal — throw bleach at it until the stain is gone or the clothes are ruined, whichever happens first — wasn't the only way. But given that I had heard of so many different ways to get blood out of sheets and other fabrics through the years, why didn't I know the best way? Why do we, as a culture, have no single go-to period stain removal technique? There has to be one that stands out above the rest. I mean, we have hoverboards! We have self-driving cars! We put people on the moon and peanut butter inside crackers, yet we can't we figure out a single effective and scientifically sound way to save your underpants after you unexpectedly get a reminder of your ongoing biological fertility while at the gym?

This question transformed from a theoretical anxiety about feminism and culture into an actual practical concern last week, after I accidentally got my period all over my sheets. I only own, like, two pairs of bed sheets, and I wasn't willing to sacrifice this one to the gods of inept bleaching. I can't just go around buying new bed sheets all the time! I'm not made out of gold, OK?

And so, I decided that the day had come to finally discover the one period-cleaning method to rule them all.

The Experiment: Analyze the many random substances that supposedly help remove period blood stains, and declare a winer (I didn't test cold water and/or soap, because everyone already knows that those work fairly well).

The Subject: A white-and-light-blue-striped cotton sheet.

Let's go to the tapes, shall we?

In the interest of full disclosure, I once successfully used spit to get a fresh blood stain out of a shirt (this was when I got a spontaneous nosebleed while at the movies) (that's not a metaphor, I really did get a nosebleed at the movies once).

Because of this, I had high hopes for this method, which I have heard offered more than once as a "use this in a pinch" kind of tips.

What I Did: I spit on a section of stained sheet, and then rubbed at it with a sponge.

Verdict: OK, I didn't really think that this method would work. And yet, I was still a little bummed out when this method really didn't work. But after a few minutes of fevered scrubbing, the stained sheet looked the same as it had before I started (except now it was, you know, covered in spit and blood).

I've used salt as a stain remover in the past with some success, and am also generally excited for any excuse to salt in any capacity.

What I Did: After wetting the stain with water, I also mixed some salt into a paste with some water, and then scrubbed at the stain (I also applied some salt to my pasta, because it was already out on the counter and everything).

Verdict: Some parts of the stain seemed a bit lighter after I scrubbed, but ultimately, there was no major stain lift. Ah, salt! You're still good for nothing but messing with our blood pressure and making popcorn taste amazing.

What can't hydrogen peroxide do? You can disinfect minor injuries with it! Brush your teeth with it! Uh, use it to remove tile grout! How could such a useful substance possibly not also be a great stain remover?

What I Did: I squeezed some hydrogen peroxide on the sheet, then wandered off for 30 minutes (I know you're supposed to actually carefully dab hydrogen peroxide on stains as you watch closely for possible discoloration, but to be honest, I do not live a lifestyle that involves close watching or careful dabbing of any sort, and I thought it was important to be honest with you).

Verdict: Perfection! The section of sheet that I treated with hydrogen peroxide returned to its old self. It's as if the miracle of fertile womanhood had never even happened upon it!

But be aware if you try this method yourself — you're supposed to apply the peroxide to a washcloth, which you then dab on the stain. You're also only supposed to use this method on fabrics that are very light-colored and pretty sturdy to begin with. Meaning: do not send me an angry email if you ruin some purple silk undergarments with this technique.

When I read about the contact lens solution stain removal method, I thought "This sounds like one of those demented home care tips you see around, like 'Glue together 46 cardboard toilet paper tubes and spray paint them all green to make a festive faux Christmas tree! Your family won't even know it's fake!' This cannot possibly work."

What I Did: I sprayed contact lens solution all over a patch of stain, with extremely low expectations, and then left it to sit for a few hours.

Verdict: This worked kinda well! It wasn't perfect, but it lightened the stain significantly — perhaps to the point where some other stain treatment used in a laundry cycle could remove it completely.

(On the flip side, though, it did make me wonder about putting a chemical strong enough to get a blood stain out of fabric into my eye holes every day. But hey, hasn't melted my eyeballs so far, so I'm probably fine)

OK, this one isn't from an instructional article, and it also wasn't handed down to me by the great period-havers of the past; rather, it was a bloodstain removal tip given in Deadpool. But hey, if sassy comic book anti-heroes don't have the solution to our menstrual woes, who does?

What I Did: I soaked a section of stained sheet in a liquid that was about one part seltzer to one part lemon juice.

Verdict: I drank some of this stain remover, and it was delicious! But it only faded the stain slightly — proving once and for all that none of the writers on Deadpool were women (as if you were wondering).

This one I just made up. I mean, I've used it in the past to remove red wine stains, right? (yes, I know this is not technically how science works; I have a women's studies degree with a minor in creative writing, take pity on me).

What I Did: I dipped a patch of stained fabric in white wine and let it sit.

Verdict: You know, this method wasn't perfect, but for something that I came up with as a joke, I thought it made a very real impact! The stain faded a few shades, which could be an asset if you're, say, out at a restaurant when the crimson tide washes up on upon your shores.

In my entirely unscientific opinion, hydrogen peroxide is your best bet if you're dealing with period stains on a light fabric. If you're dealing with a period stain on a darker fabric, you can still try salt, contact lens solution, soap, cold water, or my personal favorite: just pretending it isn't happening and assuming that it will come out in the wash.

If you ask the experts, however, they'll have a far simpler solution for you (assuming you don't wait three days to get the stain out, as I did).

"Rinsing the item in cold water as soon as possible gives the best chance of complete stain removal," Porter says. "Washing on hot/higher temperature 'bakes' on the stains and makes the removal of stains tougher, and will increase the need for solvents to be used." Porter also suggests turning the fabric inside out to get at the stain from behind if it isn't budging.

At the end of the day, he has some rather zen-like advice. "The trick is always the sooner the better, but if the stain isn’t removed the first time, have patience." Patience is a virtue, after all.

This article was originally published on March 22, 2016