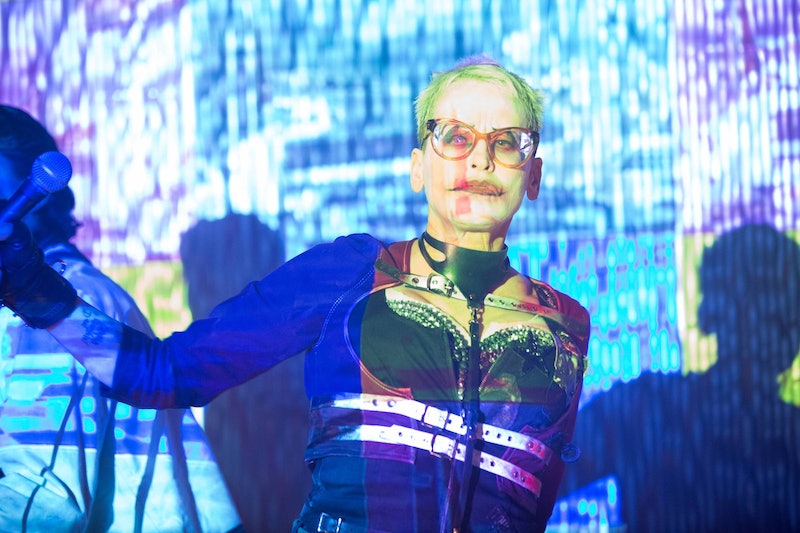 The villain in the second half of Gotham Season 2 is undoubtedly Arkham Asylum's Dr. Hugo Strange, and after the conclusion of the Galavan story and the death of Jerome, it seemed like Gotham was finally done with the constant suggestion that minor characters would eventually become the Joker. But in a recent episode, the Joker-themed club Bruce Wayne visited would indicate that the show is still open to having fun with the idea. In fact, Jeri, Lori Petty's character, so faithfully recreated the Joker's signature look that perhaps she will serve as another Joker red herring in upcoming episodes.

But if you look closely at the club scene, the characters aren't just partying and enjoying the ambiance of the mad clown. They're also watching footage of the "Maniax" (the gang of former Arkham inmates put together by Theo Galavan and run by Jerome) taking over Gotham City and cheering. It looks like the end of Jerome's final episode, which concluded with an ominous voiceover about the "inspiration" Jerome will bring to the city's underworld. It seems that inspiration has already taken hold in the club, where there's a lot of black, white, red, purple, and green going on. However, the clown motif (like Jerri's makeup) wasn't associated with Jerome while he was in the Maniax. He performed while dressed as a magician.

In the Batman comics, there aren't any examples of a club popping up where people dance to the imagery of the Joker. But Gotham has teased many original ideas for the Joker's background, as well as playing around with aspects of the Joker's backstory that are present in the comics, like with Season 1's "Red Hood" episode and showing failed standup comedians performing in Fish Mooney's club. Whether or not Gotham plans to use the club to introduce the series' actual take on the character, it's just one of many ways that the series is suggesting that voiceover message is true. People in the city, like Jeri, are clearly taking Jerome as an inspiration.

And somewhere along the way — perhaps due to his circus roots, or perhaps entirely due to Jeri's idea — they've decided that the proper way to pay homage to him is through clown imagery. Obviously, the Joker, also known as "The Crown Prince of Crime," is famous for his clown-like appearance, but who will put on that makeup and start committing a crime spree for the first time? Gotham still hasn't revealed the Joker's true identity. But there's actually another possibility — Hugo Strange has been experimenting with raising clones of dead bodies (most notably, Theo Galavan). Jerome's body was shown in the morgue, and probably not in Strange's clutches. But there's no limit to what kind of cruel scientific wizardry Strange is up to, which means there's a slight possibility that Jerome could be the one to fulfill the inspiration he posed.