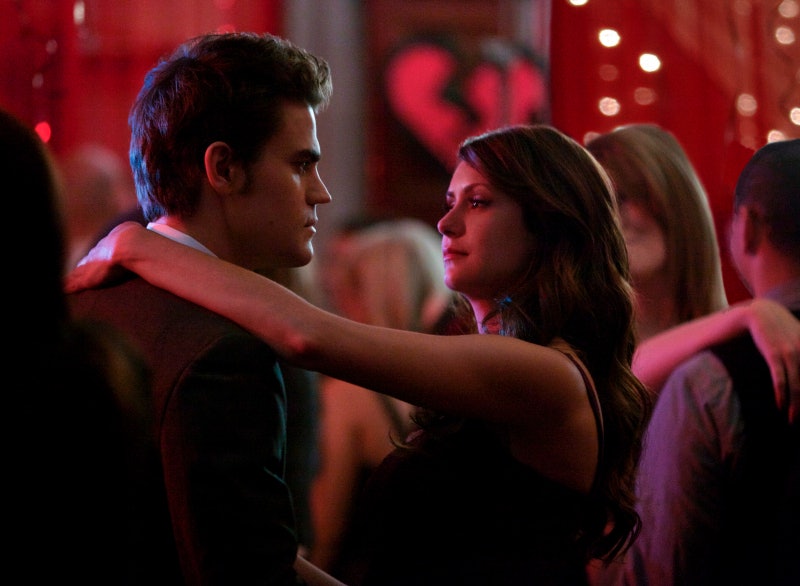 The Vampire Diaries is back in top form, after a half season of meh-ness. Last week, Katherine made her residence in Elena's body permanent. This week, in "Total Eclipse of the Heart," Katherine took the next steps toward winning back her one true love, Stefan, and Damon went 100 percent off the deep end.

Everyone in Mystic Falls and at Whitmore College is dealing with their own problems, as usual, and, as usual, they range from completely mundane to legitimately life-changing. Here are this week's struggles of all involved, ranked from least to most life-threatening or severe.

Tyler is bummed that Caroline slept with Klaus.

Tyler spent this week's episode downing shots with Matt and Nadia to drown out the pain he's feeling after last week's revelation that Caroline (who he had basically dumped and left seemingly forever) slept with his arch-nemesis Klaus (who is 1,000 years of sexy in a 32-year-old body). We're all very sorry we're not sorry, Tyler.

Caroline is pissed that Tyler is pissed at her — and none of her girlfriends understand her plight.

Caroline's issues are only slightly bigger than Tyler's and only because she reaches out for emotional support instead of drinking buddies. She convinces Elena (really Katherine, but she thinks it's Elena) and Bonnie to attend the "bitter ball" with her. It's a dance where you're supposed to not take a date and generally hate on the opposite sex. Of course, it's also co-ed and very much feels like a hook-up/date event, so there's that.

Without her Katherine Pierce-ness to fall back on, Katherine is having a bit of time winning back the heart of her "one true love," Stefan. She has to be believably Elena-y or risk blowing her cover, which means no overt seduction and lots of subtle manipulation. Even though she's fab at it, it's a bit more slow-going. She also has trouble pretending to give more than zero fucks about things that aren't winning Stefan back, like Jeremy's life, for example (more on that later).

Bonnie has to train a n00b witch on the fly.

Now that Bonnie is back-from-the-dead as the anchor to the other side, she's lost her witchy mojo. Since TVD relies heavily on expert magic to save the day when all else fails (and it often does), there was an opening for resident witch. It seems to have been filled this week. The new model is a girl Bonnie caught magically spinning a pencil in sociology class and she needs to learn complicated locator magic pretty much immediately to help save Jeremy's life. Of course she does – barely.

Stefan needs to save his brother from himself.

Self-sacrificing Stefan admits this week that he eventually stopped wanting Elena back because she was so good for his bad boy brother Damon. Now, he's on a mission to save him from the spiral he's on, which will be the focus of next week's episode. Family drama ranks high, but doesn't crack the top three.

Matt is being used for information and it's a miracle he's still alive.

In order to keep up appearances as Elena, Katherine has been grilling Matt about things and then having Nadia compel him to forget the whole thing to keep the charade going. Tyler starts to suspect something is up and tells Matt to drink some vervain (it's weird that he's not drinking that daily of his own free will, you know, to keep his own free will). When Matt goes all "aha! I knew it!" on Nadia about the truth about Katherine, she has no choice but to keep him prisoner until the vervain leaves his system. Well, that's not entirely true. The other choice would be killing him. Matt is just courting death at this point. He's the Xander Harris of The Vampire Diaries; HOW is he still alive?

In order to get the information they so desperately want to enact their revenge, Damon and Enzo kidnap Jeremy and threaten to kill him if the good guys don't find a witch to do a locator spell for them. Damon and Enzo aren't threatening guys. They're action guys. They very nearly follow through on the promise to kill Jeremy – and the poor guy just came back to life, too. It was a rough week for Jere Bear.

Damon is totally evil and drinking vampire blood and holy shit what.

To say that Damon has gone off the deep-end is a massive understatement. After Elena (not really Elena – Katherine) breaks up with him for good and shatters his beautiful black heart, he returns hard to a life of evil. He kills Aaron. No, that's not fair to say; he slaughters him. He kidnaps Jeremy and seems 100 percent willing to really kill him. He pushes away everyone who cares about him to follow the path of his own revenge. Finally, he becomes a twisted part of the big vampire experiment. Damon has been injected with the venom that turns vampires into cannibals and he's feeding on his fellow undead now. Yuck, yuck, and yuck. This is no good for him. He calls it karma and it looks like karma really is a bitch.