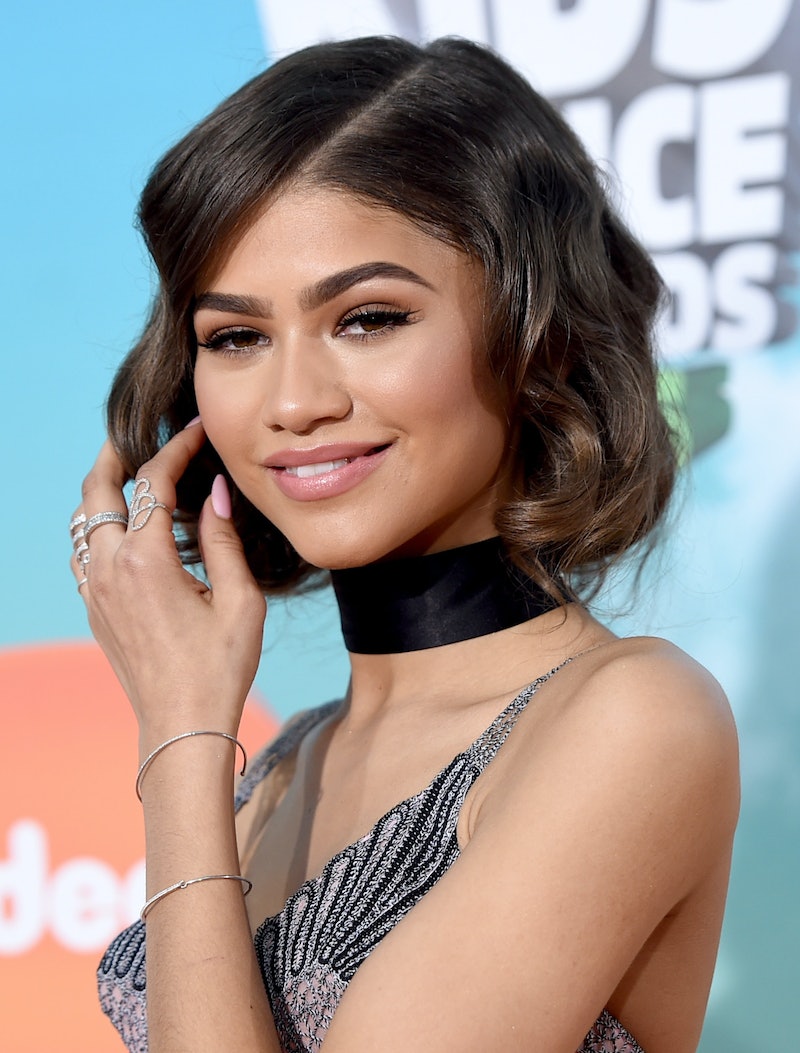 To anyone who hasn't been living under an anti pop culture rock, it's likely a known fact that Zendaya Coleman is a queen. She's a true trendsetter, with both eyebrows and nails consistently on fleek. Not to mention that she can channel David Bowie like a boss. But since she called out Fashion Police's Giuliana Rancic's racist comments about her hair at the 2015 Oscars, the 19-year-old has also solidified herself as a figure for furthering awareness of racism in fashion and the media. In a recent interview with PopSugar, the star further spoke about taking fashion risks, her relationship with her hair, body image, and the importance of fighting back against cultural appropriation. And it made me think about the many times Zendaya has shared inspirational quotes intersecting with these topics.

Zendaya's unflinching critiques on racism and cultural appropriation in the media are incredibly refreshing to hear in a world that still seems to push back against increasing political awareness. She is a fierce trendsetter who boldly paves the way for more positive body image and the shattering of so-called fashion rules. Her unwavering confidence and her unique sartorial choices (like the mullet she rocked at the 2016 Grammys) serve as great examples for young women all over the world. But it's important to remember that she also cares deeply about visibility and representation for POC. Here are some of her best quotes about hair, body image, cultural appropriation, and being yourself. Prepare to be inspired.

1. How Hair Has Shaped Her Identity

"Hair has allowed me to experiment and have fun. It has allowed me to build up my confidence," she told PopSugar in a March 2016 article. "That made me more dependent on what I like, what I want, and not listen to or care at all about other people's opinions of what I look like and how I feel about myself." Doing things for yourself is always the way to go.

2. On How Positive Body Image Is A Process

"You shouldn’t feel discouraged if you’re not waking up and feeling amazing about yourself," Coleman told NYLON in a summer 2015 interview. "That’s not necessarily how it works. It doesn’t take one shopping spree to give you that confidence. It’s a developing process. Everyone goes at their own speed. For me, it’s just something you have to continue to work on. It’s a growth and a process. As long as you take every opportunity to learn more about yourself and fall more in love with yourself every day, you’re doing good."

3. On Maintaining Positive Body Image In the Face Of Negativity

Dealing with trolls — whether online or IRL — is tough. As Zendaya told PopSugar, however, "You cannot allow other people's opinions, comments, or decisions affect how you feel about yourself. Understand that it's OK to feel it and be affected. It doesn't mean you're weak. You're a human being. [The problem is] allowing someone else's words to affect you and create action in your own life."

4. On Being A Role Model

"I try my best to make myself stronger and learn more about myself and not just talk the talk but walk the walk," she told TIME in a Nov. 2015 interview. "It’s easier said than done. It’s easy for me to write a paragraph about body image and how we should all love ourselves. I don’t think that happens overnight. I don’t expect anybody to go home and feel better about themselves just because they read my tweet. I don’t think me just writing it will change someone’s life completely, but I definitely think it can spark a change or a be a piece to somebody’s puzzle."

5. On Disregarding Rules And Trends

"I've gotten to a point with fashion where I just don't care. I wear and I do what I want because I like it, because I am confident in it, because it makes me feel good," she told PopSugar. "These rules and these trends are so temporary." "Trendiness," like "beauty," is incredibly subjective.

6. On Her Instagram Response To Giuliana Rancic's Offensive Comments

"It was a learning experience for myself and for everyone who read it," she told Complex for the publication's Dec. 2015/Jan. 2016 cover interview. "A lot of people don’t realize that hair is a big thing for a lot of people, not just African-American women. It’s something to be aware of and to be cautious of. So it was something that I really felt like I should speak on. There were so many women, of all races, that came up to me and were like, 'I really love what you said,' or 'I had my daughter read that.'

She added, "All my brothers and my dad at one point had dreadlocks. My little nieces have curly hair. And if they were to have someone say something demeaning about what they have and what they hold dear to them, then I would want them to at least have the pride within themselves to come up with a response that made sense and that they were proud of. Honestly, I think about my little nieces and my little nephews first. Because one day they’re going to have Twitter and they’re going to have Instagram, and I’m going to be like, 'This is how you handle it, kids.'”

In regards to the appropriation of dreadlocks and braids by white individuals, Zendaya told PopSugar, "Black women have been wearing braids for a very long time, and that's another part of the frustration. We've been using that as a protective style, as a hairstyle. That's been in our culture and our community for a very long time. So it's not this new, fresh, fun thing."

8. On Amandla Stenberg And Cultural Appropriation

"My girl Amandla [Stenberg], who is super dope, brought up another problem," Zendaya noted in her interview with PopSugar. "She wished society loved black people as much as they love black culture. That's the truth. The credit gets taken away from us when we make certain statements or when we do certain things. That is the frustration. People want to be around for the positives and the things that we bring as far as culture, but they don't want to be around when we have problems or when we're getting shot in the streets."

9. On The Media's Responsibility Regarding Culturally Appropriative Fashion Statements

When it comes to being an ally to POC, Zendaya's advice is to "talk to women of color and hear their personal experiences. Get to know the background, understand why people are offended by it, and [learn] how we can be more sensitive of other people's cultures — how we can enlighten ourselves. Use it for good other than just something to click on," she told PopSugar.

10. On The Importance Of Diversity On The Red Carpet

“A big reason I play with beauty and hair is that it’s important to show different kinds of beauty when I’m on the red carpet," she told Flare in a Nov. 2015 interview. "I don’t want to be just one-dimensional or relatable to one type of person. I want a different woman to be like, 'That’s like me! That’s like my hair! Or that’s so my style!' If I went out there and was just like, pretty, all the time, doing the same thing, it can be cool, but you’re also catering to one type of person, and what about all those other kinds of beautiful out there?” Amen for celebrating the many diverse ways there are to exist as an individual in this world.

11. On Why She's So Vocal About Body Image

"There is no such thing as ugly," she told beauty, health, and fashion site New You in a Feb. 2016 interview. "That’s a word that doesn’t really enter my vocabulary. If there’s any definition to being perfect, you’re perfect at being yourself. No other person can be you 100 percent; no one has your fingerprint; no one has your DNA. You are you 120 percent, through and through. Whether it is through my social media or whatever, I want anyone who looks up to me to know that I go through the same problems. I have to be confident in who I am. When I learn things about myself, I like to share that journey with people because I know there are a lot of people going through the same thing."

Zendaya's role in celebrity culture is so incredibly valuable. Not only is the industry whitewashed, but so is our general understanding of issues like cultural appropriation in the first place. With the help of people like her, we can hopefully move forward in being more informed and empowered in our style choices, and choices at large.