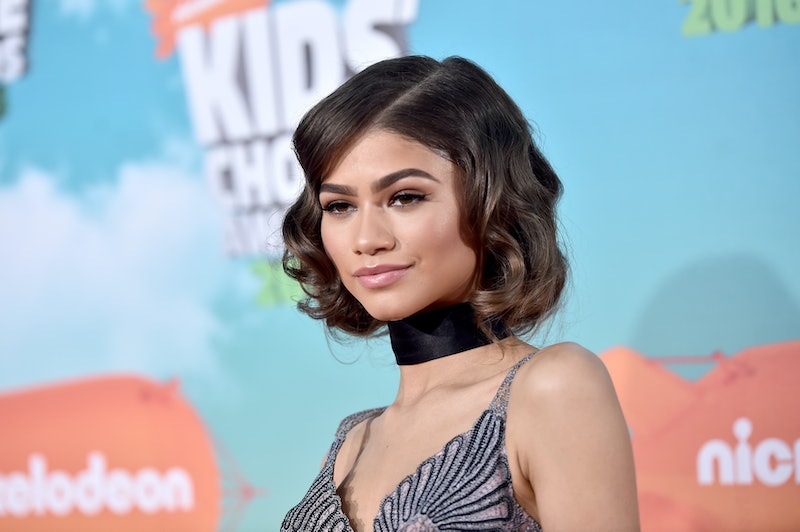 On March 13, Zendaya Coleman and feminist comedian Julie Klausner got into something of a Twitter feud, and in the most head-scratching way possible. As many of us know, Zendaya is on a roll when it comes to standing up for herself. In 2015, for instance, the musician was attacked at the Oscars by Fashion Police presenter Giuliana Rancic over her dreadlocks, only to come up with an eloquent and educational response. And this year, Zendaya was skinny-shamed at the Kid's Choice Awards by Klausner. Once again, she's not standing for it.

In less than 140 characters, Klausner managed both to skinny shame Zendaya and belittle the experiences of eating disorder survivors, all while bringing up the incident with Rancic last year. She wrote, "Zendaya's ultimate retort to Giuliana Rancic is starving herself down to the size of one of her elbowz."

Essentially, the comedian is saying that Zendaya responded to Rancic's hair shaming by losing weight — which just doesn't make a whole lot of sense. From my experiences, there isn't much of a correlation between one's hair and body weight. Add to that the fact that this came from a feminist comedian, and it is all the more uncomfortable. Klausner tore another woman down because of the size of her body, without knowing the circumstances or lifestyle of that woman.

Zendaya was quick to respond to the attack. She did not tear Klausner down in return, but asked her if she really thought body shaming was funny and noted that she is willing to educate her as to how it is not.

The musician then shared another tweet to encourage her followers to embrace and love their bodies, no matter what size, shape, or thickness those bodies are.

When Zendaya showed up on the red carpet of the 2015 Oscars in a Vivienne Westwood gown and swept back dreadlocks, it was to the delight of many spectators but to the criticism of E! red carpet co-host Rancic and Kelly Osbourne. Upon going over the teen's red carpet look, Rancic's comments about Zendaya's attire were nothing short of inappropriate. Rancic said that Zendaya's dreads probably "smell like patchouli oil… or maybe weed." After Zendaya's eloquent comeback and fury on the Internet, Rancic apologized for what many felt was an act of casual racism.

Zendaya responded to the distasteful comment on Twitter, expressing that there is already enough harsh criticism about natural hair in our society without adding to it. She had worn her hair in locs to encourage anyone watching at home to recognize that their natural hair is good enough to wear however they so please.

As for Klausner's tasteless comment, I think it's actually an important one. Body positivity goes both ways. Just as it would be unnecessary to negatively critique someone for being fat, it's equally unnecessary to attack the women who are on the other side of the spectrum. Thigh gaps or no thigh gaps, every body is beautiful and should be respected.

More like this
I Tried Kendall Jenner's No-Pants Look As A Plus-Size Woman
By Sarah Chiwaya
42 Black Owned Fashion & Beauty Brands To Support Today & Always
By Mekita Rivas, Shea Simmons, Kui Mwai and Dominique Norman
Chrome Nails Were The Biggest Manicure Trend At The 2023 Grammys
By Olivia Rose Rushing
Amanda Gorman’s Makeup Artist Breaks Down The Poet's 2023 Grammys Glam
By Olivia Rose Rushing
Get Even More From Bustle — Sign Up For The Newsletter
From hair trends to relationship advice, our daily newsletter has everything you need to sound like a person who’s on TikTok, even if you aren’t.