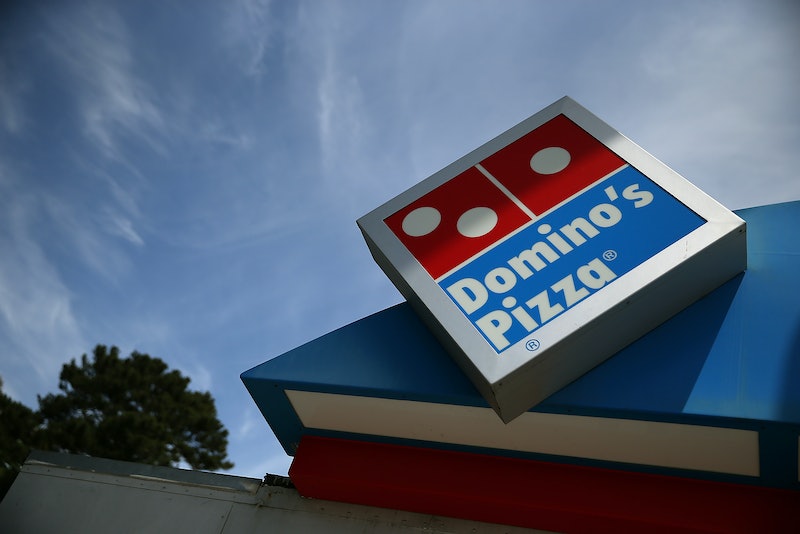 Domino's has already proved itself to be a pretty tech-savvy company (remember Twitter emoji ordering?), but now it's stepping up its game. The fast food chain is reportedly in the early phases of testing a — wait for it — Domino's robot pizza delivery service. Yup, you read that right: pizza brought to your door by an actual robot.

According to The Telegraph, Domino's Australia unveiled its new "DRU" (Domino's Robotic Unit) at a recent event in Brisbane. The three-foot-tall, self-driving robot reportedly uses GPS technology to deliver pizza and drinks to customers, up to 12.5 miles away from its original location. It's currently only in the prototype phase, but the mini-robot successfully made his first trial delivery earlier this month and the company plans to continue testing in future months, with the hopes of eventually making it a permanent part of its service.

So how exactly does it work? After placing their orders, customers get a special code sent to their phone. You then use that code to open up the specific compartment in the DRU that contains your order. This security system not only helps to keep things organized, it also prevents any super-hungry people from accidentally (or purposely) grabbing food that isn't theirs.

What if you need more than one pie? No problem — the DRU can apparently carry up to 10 pizza pies, which it keeps warm in heated compartments. And you don't have to worry about the robot getting lost. The self-driving machine is designed to travel at speeds of 12 mph and move along footpaths and bike paths, all while avoiding potholes or other obstacles. And while technology always has its bugs, customers can take comfort in knowing the DRU came from a reliable source: The robot was developed by Domino's as part of a partnership with Marathon Targets, a military startup that typically develops robotics for live fire training.

“We improvised, we explored, and we discovered that this audacious idea could actually become a reality,” Domino's said in a video introducing the DRU.

How cool does this sound?! Obviously, there's still a ways to go before Domino's can implement it into its daily service, but it could be a great step towards more efficient delivery. Plus, if it works, other companies may jump on board with a similar idea. Can you imagine these mini-robots delivering everything from pizza to coffee to wine? I don't know about you, but I'm on board!