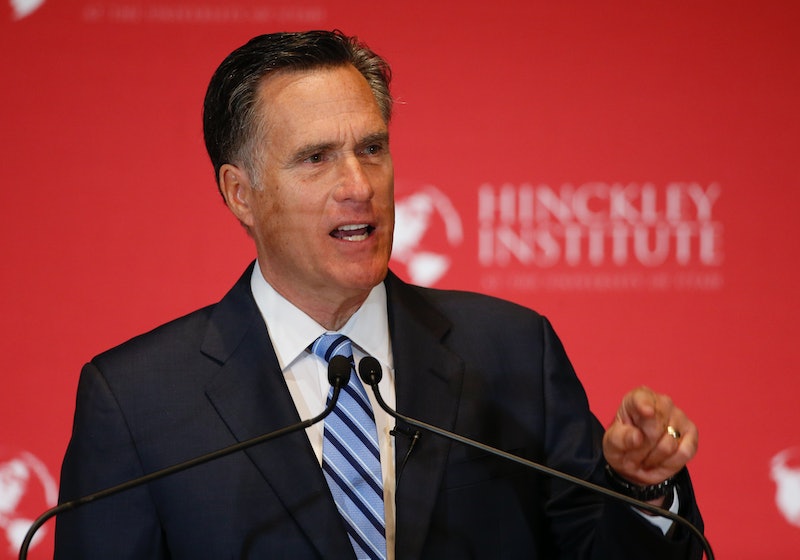 Former Massachusetts Gov. Mitt Romney might not have had enough support from the country to become president four years ago, but he's definitely still got the overwhelming support of Utah's Republican voters. As voters head to the polls on Tuesday for Utah's presidential primaries, Romney will also be casting a vote — and he's not shy about telling people which candidate will get his support. Romney's vote in Utah could make all the difference for Republicans in both the primary and the general election.

Romney may have been the governor of Massachusetts, but he has never been an outsider in Utah. He's a member of the Church of Jesus Christ of Latter-Day Saints, also known as the Mormon Church, which is headquartered in Salt Lake City. Utah is known for its high Mormon population, and Romney graduated from Brigham Young University, the best-known Mormon university in the country, located in Provo, Utah. Even while he lived in Massachusetts, Romney maintained a vacation home in Utah. When the Winter Olympics were held in Salt Lake City in 2002, Romney served as the organizing committee's CEO. Romney currently lives in and has registered to vote in Utah.

A few weeks ago, Romney came out full-force against Republican frontrunner Donald Trump, saying, "He has neither the temperament nor the judgment to be president." Then, on Friday, Romney made his decision in the Republican race even more clear. He announced that he would be voting for Texas Sen. Ted Cruz in Tuesday's primary.

With his decision to support Cruz, Romney either reflects or has impacted the choice for Utah's Republican voters. It's probably a little bit of both. Polls throughout 2016 have shown that Cruz has a high level of support throughout the state, but that support has skyrocketed since last week. According to RealClearPolitics, Cruz led the Republican vote in Utah by just one percentage point back in January. In February, Florida Sen. Marco Rubio, who has since suspended his campaign, led the state by just two points. In the week before the primary, Cruz's support shot up to a 24-point lead over Ohio Gov. John Kasich.

Clearly, Rubio's decision to exit the race has had something to do with Cruz's overwhelming support ahead of the Utah primary. It can't be a coincidence, though, that Romney has also chosen to support Cruz publicly. What's more, the latest polls out of Utah show that if Trump wins the Republican nomination, the state could turn blue for the first time in more than 50 years.

It seems that Utah has remained immune to the Trump fever that the many of rest of the nation's Republicans seems to be catching. Instead, Utah's Republicans will probably stick with what they know on Tuesday and support the same candidate as Romney. If he does in fact win in Utah, Cruz won't pick up enough delegates to catch Trump, but he could at least gain some momentum after the several sweeping victories claimed by Trump.