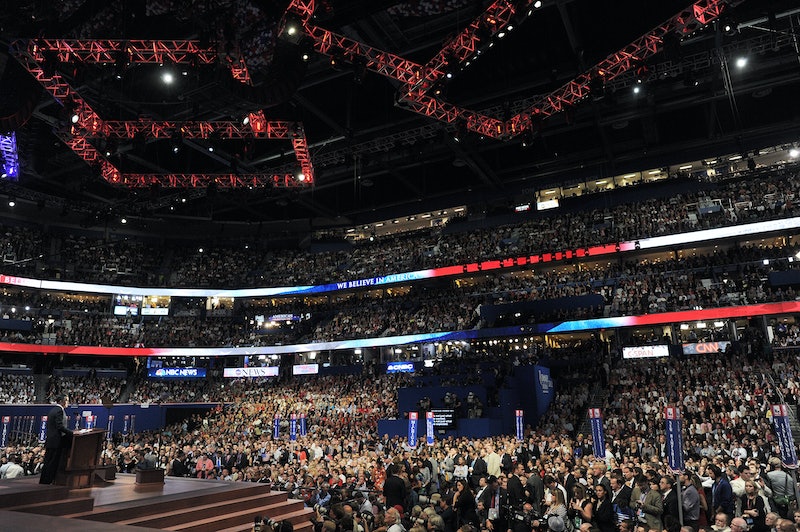 It's not news that the Republican National Convention may have trouble nominating Donald Trump, despite his seemingly overwhelming popularity thus far in the Republican primaries and caucuses. Should Trump fail to secure the required number of delegates at the Republican National Convention to win the nomination — that is, 1,237 — it would spur what is called a contested, or even a brokered, convention. And if no candidate reaches or nearly reaches the 1,237 delegate requisite, the Republican Party will have to determine the official nominee in Cleveland this coming July. Of course, this is not the first potential instance of a brokered convention, which were actually common for some time in American history.

If there is no winner in that first ballot, over half of the delegates become free agents, which is when the contested convention transforms into a brokered convention. A brokered convention at one time referred to the role political bosses and secret deals played in the nominating process, but it now has a more modern meaning. At this point, it means the campaigns begin to battle for support on the second ballot, and possibly beyond. It should not go unmentioned that some delegates must remain pledged to their candidates, according to the laws of those states and territories, for more than one round of voting at the convention.

Clout at this stage is not in the hands of the states with the most delegates, but rather dependent on by-laws and procedure. According to RNC rules, a candidate must have the support of the majority of delegates of at least eight states in order to get the party's nomination. If no candidate can achieve that, a roll call (ballots) will occur until this does happen.

When Did Brokered And Contested Conventions Begin, And Where Do They Currently Stand?

Republicans saw their last contested convention battle in 1976, when Ronald Reagan attempted — and failed — to remove incumbent Gerald Ford from the ticket after Ford couldn't secure enough delegates to earn the nomination. Before that, a contested convention nearly occurred in 1960 when Nelson Rockefeller was up against Richard Nixon. Prior to the convention, the two met in what was called the "Fifth Avenue Pact," in which Nixon agreed to use some of Rockefeller's more liberal views on his own party platform in exchange for Rockefeller's agreement to drop out of the race before the convention.

Way before that, the very first Republican contested convention occurred in 1860, where Abraham Lincoln was nominated on the third ballot.

Curiously, according to Trey Mayfield of the conservative website The Federalist, six of the GOP's 10 brokered conventions resulted in nominees who became president, and five of them were winners of the popular vote.

As For The 2016 Republican National Convention?

Gov. John Kasich of Ohio reigned victorious in his home state, which brings the Republican Party closer to a contested convention this summer. Donald Trump did win big in Florida, but in order to earn the required 1,237 delegates for July's convention, he'd have needed Ohio — a winner-take-all state. Kasich won those 66 Ohio delegates, putting him at 143, which, though still far behind Trump, brings Trump to 673 delegates as opposed to 739. This means that Trump would have needed to average 45 percent of the delegates in the coming races, whereas he now must must average 53 percent of the 1,061 remaining delegates up for grabs.

Given these numbers, Cruz's suggestion that Kasich should drop from the race, leaving it between two contestants is silly, as Trump would only then have more delegates to gain, especially with left-leaning states' races, like New York and New Jersey, approaching. Kasich will appeal in these states more than Cruz, due to the lack of evangelical, far-right voters. A three-person race could lead to a contested convention.

Even so, if Trump nears 1,237, but still falls slightly short, a contested convention likely will not occur. If it were to transpire, Trump might leave the race and threaten to run as a third-party candidate; if he falls very short of that 1,237, however — depending on the Republican Party's general notion of very short — a contested convention could turn out after all.