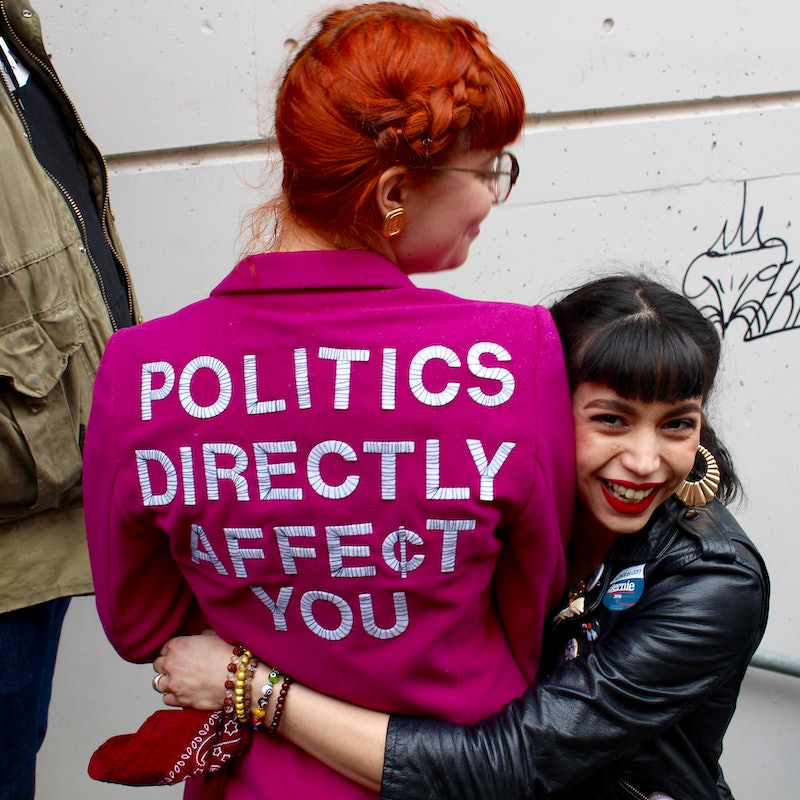 2016 is shaping up to be one of the strangest election cycles in American politics to date. While the lion's share of this election's bizarre turns may belong to Donald Trump, there have been other curiosities. One of them is that although there is a highly-qualified female candidate on the ballot, Hillary Clinton, young women aren't exactly jumping at the chance to help make history and elect the first female president. It begs the question: why are young women supporting Bernie Sanders?

According to a USA Today/Rock The Vote poll from earlier this month, women ages 18 to 34 back Sanders over Clinton in nearly a 2:1 ratio. As I made my way through a massive throng of people who had turned out to see Sanders speak Sunday at the Key Arena at Seattle, a theme emerged: they believe that electing Sanders is a way to help lift up the whole country — not merely because they themselves would benefit from the policies that he has proposed.

From stopping fracking to standing up for reproductive rights to making a quality college education an attainable reality for every student, the young women I spoke with voiced concerns over a plethora of political issues. Waiting patiently under a persistent Seattle drizzle, some for over four hours, everyone that I talked with was convinced that Sanders was the best candidate on the slate to address their concerns.

Tech entrepreneur Monica Houston, 27, tells Bustle she supports Sanders because of his positions on income inequality and the environment — which, according to her, are the "two biggest issues we are faced with today." She also mentions his "consistent support" for LGBTQ rights and his support for a living wage as two other issues where her political views overlap with the senator's.

Karina Arroyo (left in the above photo), 17, is a first-generation American, a person of color, and a first time voter, is eager to vote for Sanders. With Arroyo's plans to head to college next year, Sanders' education policy appeals to her greatly; she believes that he is the only candidate whose education policy will actually empower her to attend and graduate from college. "It's really important to be able to go to school, and make a difference. I think that Bernie is the only candidate who can make it possible for me," Arroyo said. She came to the rally with her friends, Deega Mah, 18 and Rodha Sheikh, 18, pictured with her above.

"He's a candidate for the people, he believes in what we need for this country, and [he] is going to lead us there," Amy Bragg, 27, tells Bustle. When I ask her why she thinks that Sanders is the best candidate for young women voters to support, she says, "To find equality, we need the proper infrastructure, and he's going to build it for us."

Brooke Hensley, 19, says that her key concern in this election was fracking — a controversial method of harvesting small pockets of natural gas which has been linked to earthquakes, contaminated drinking water, and health problems. But that's not the only thing on her mind. Hensley tells me "Bernie has always been fighting for racial equality, gender equality — and economic justice, environmental justice, human rights, too."

Laurel Cleveland, a 24-year-old artist originally from Alaska, says simply: "I support Bernie Sanders because I believe in humanity, and I think that the world can be a better place."

Fatima Mirtza just turned 18, and now that she "has more of a say in politics," she says that watching the struggles that her parents had when they first immigrated to this country hugely influences her outlook. "Obviously, he's super pro-women's rights, and pro-choice," Mirtza responds when asked why she supports Sanders.

Danielle Robinson, 25, tells me that her biggest reason for being a Bernie supporter is "because he doesn't take money from special interests. It's all raised by individuals." She also cites his belief that "climate change is a 'real thing' and not something, like Trump tweeted, that is just created by China."

Jacquelyn Marcella, 26 (right) and Erica Riker, 25 (left) tell me that Sanders' longstanding status as an ally to the LGBTQ community was something that stood out to them. "There are huge numbers of women in the LGBTQ community that are impacted everyday by complex health, economic, and legal issues," Riker says. The campaign's inclusion of Native perspectives also contributed to their support of Bernie, they say. "Bernie is the only candidate making Indian country a priority. If an entire community is forgotten, naturally so are the women," adds Marcella.

Leslie Zukor, 32, says Sanders' support for developing a single-payer health care system, what some refer to as "Medicare For All" is the main reason why she is supporting him. She also cited his support for women's reproductive rights as an important reason why she was an enthusiastic supporter of his candidacy.

While pundits may wonder why so many young women are throwing their weight behind Sanders, there's no simple answer. The only thing that is clear is that there's no single reason why the young women at Sanders' rally in Seattle are feeling the Bern.