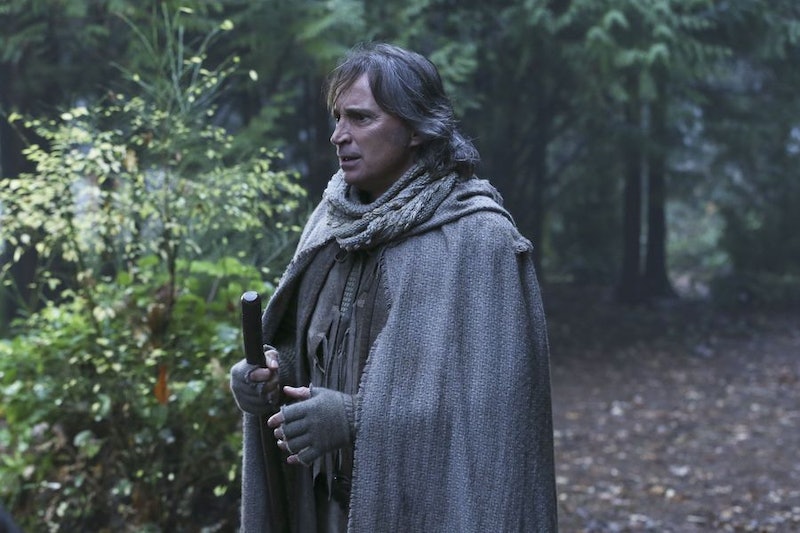 For those of you who were wondering whether or not Emilie de Ravin's real-life pregnancy would be incorporated into Once Upon a Time , Sunday night's episode "Devil's Due" finally answered your question in a very big way. As an on-going Rumbelle supporter, it gives me great pleasure to announce that Belle is pregnant on Once Upon a Time , which means a Rumbelle baby is on the way! Though, this is still all unbeknownst to Belle herself. But, as usual, my excitement is making me get ahead of myself. Let me explain.

At the beginning of the episode, Rumple created a crystal ball from scratch in his father's Underworld shop. (A feat which is pretty impressive in and of itself.) When he looked through the magical device, Belle appeared before him, and the sight of her was so overwhelming that he accidentally dropped the crystal ball, shattering it to pieces.

So how does this have anything to do with finding out that Belle is with child? Evidently, Belle wasn't who Rumple had been looking for initially. Hades later revealed that the Dark One had asked the magical orb to show him his child, referring, of course, to Baelfire. But instead, it decided to show him his other, unborn child, which is currently residing inside of Belle. That's why Rumple was so desperate to go home all of the sudden — not just because he misses Belle, but because she's carrying his child.

However, before we all start jumping for joy, it's important to note that Hades has some pretty big plans for this little bundle of joy. During the episode's Milah-centric flashback, Rumple made a deal with a man in order to save Baelfire's life. He promised to give this man his second born child if he handed over the antidote that would save his firstborn. (This was back in the days when Rumple didn't want to hurt a fly.)

However, when he became the Dark One, he decided to make himself loophole in this contract by killing man he had struck the deal with. But as Hades pointed out, death doesn't nullify a contract down in the Underworld, and the man just so happened to sign the contract over to Hades himself. That means he can cash in on that debt any time he wants and take Rumbelle's baby right out of their loving arms. I guess it's like Rumple always says: all magic comes with a price...