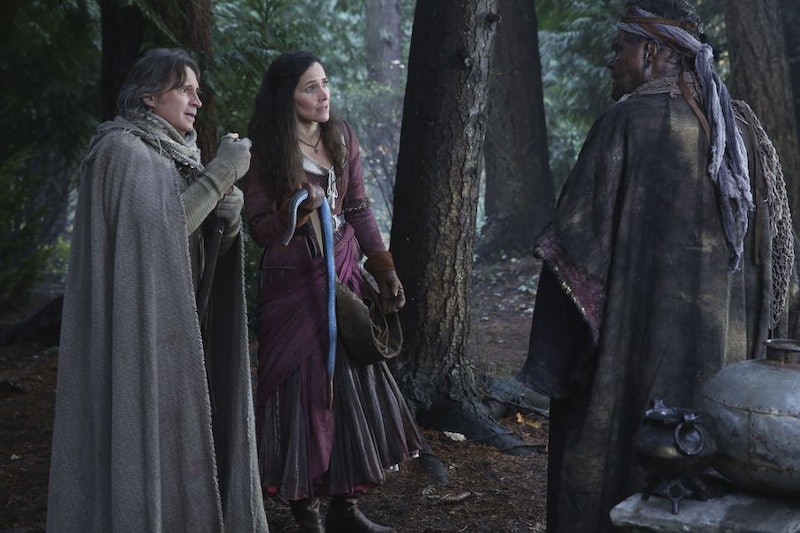 There were a lot of great things that I loved about Sunday night's Once Upon a Time episode "Devil's Due." First of all, we had honor of witnessing one of the most awkward introductions in Storybrooke history when Rumple introduced Emma to his deceased wife, Milah, who was not only Neal's mother, but Killian's ex as well. So yeah, that was pretty great on many different levels. But this also meant that we were introduced to a special Milah-centric flashback, which proved to be just as interesting. You see, while Rumple and Milah were off bickering, a young Neal (or Baelfire) was bitten by a poisonous snake, which is later revealed to be an Atlantean rat snake. Does this possibly mean that Once Upon a Time Season 6 will center around Atlantis? As in the Lost City of Atlantis?!

I know this might've just been an off-hand remark that we weren't meant to read so much into. But then again, I wouldn't put it past the OUAT writers to slip this clue in and see who actually notices it. This is one area of Disney that the series has yet to tap into, and you have to admit it would make for a great storyline. I mean, it's basically like the Disney equivalent to Treasure Island, which sounds like an adventure our merry band of Storybrooke characters would be eager to explore if given the opportunity. Either way, though, Twitter certainly seems intrigued by the idea...

So what say you, OUAT? Is this mysterious lost continent our next adventure? I don't know about the rest of you, but I'm definitely up onboard with this possibility.