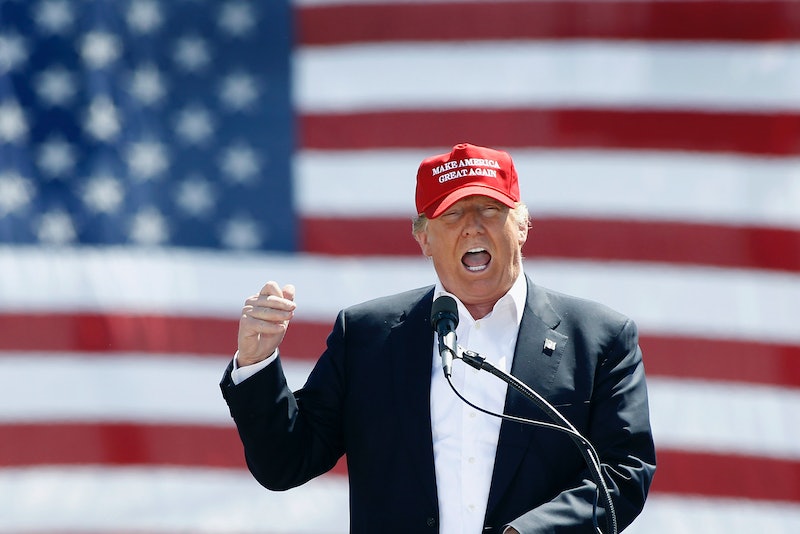 Maybe you know someone who's voting for Donald Trump. Maybe you don't. But there are a lot of them out there. It's easy to forget that 35 percent of GOP voters nationwide are hoping that Trump wins the White House. Regardless, they're real people, and understanding them could help undermine his campaign. Trump has a very strong base of fascinating, fanatic supporters. According to Trump, they're likely to riot for him if he doesn't win the nomination, and some have already been arrested for violence at his rallies. Not all of them are so extreme, however.

Some come from the highest echelons of American political power, Hollywood, and reality TV — from Alaska to Florida, with lots of the heartland in between. Some seem like no-brainers; if kooky politicians don't stand with kooky politicians, who will? Others though are more puzzling. It may be that the common thread is Donald and Donald alone. Well, Donald and anger with the government/establishment. There's some of that bubbling to the surface, too. Not all of these supporters have been officially recognized by the Trump team, but that doesn't mean he won't Tweet out an awkward selfie with one of them over the course of the primary season.

Duck Dynasty star Robertson endorsed Trump in January, comparing Trump to himself. "He represents success and strength, two attributes our country needs. Like me, he is a successful businessman and family man, and I endorse his candidacy for President of the United States," he said. I guess we can be glad that Robertson is not in the race.

The eyes! In the most uncomfortable announcement speech ever, New Jersey Gov. Chris Christie officially threw his support behind the Donald. His body language said otherwise.

Brian France, chairman and CEO of NASCAR, has endorsed Trump, as have a few current and former drivers. This has created a near-immediate blowback. France has been questioned over his commitment to diversity, given Trump's anti-immigration views.

Perhaps a little less surprising than Christie's support is Brewer's. She spent her years as Arizona governor campaigning against illegal immigration. She spoke highly of Trump's proposed border policies: "As Mr. Trump says, we either have a country or we don't. This may be our last chance to ensure our children grow up in a country with borders, and with a government that protects its own people."

Though he leads one of the largest evangelical schools in the country, Falwell endorsed Trump — despite many evangelicals preferring Ted Cruz. He said that he's not electing a minister, but someone who will speak his mind, like his father. Falwell, Jr. said that he is following his dad's policy of picking a president based on leadership ability and not theology: "Dad explained that when he walked into the voting booth, he wasn't electing a Sunday school teacher, or a pastor, or even a president who shared his theological beliefs."

Perhaps the most fascinating of the list — but far from the most surprising — is Sarah Palin. Her endorsement speech drew lots of headlines, and even more YouTube views. Write her off as kooky, but she connects with the same group of American voters that Trump does. In her words: "How 'bout the rest of us? Right-winging, bitter-clinging, proud clingers of our guns, our God, and our religion, and our Constitution."

Remember this gem of a reality TV star? According to The Huffington Post, she Tweeted her support for Trump. She shot to stardom via Myspace, and hosted her own MTV dating show. Most recently she was kicked off of Celebrity Big Brother for Nazi sympathizing.

Kid Rock shared his two cents with Rolling Stone about Trump: "I'm not an expert at political science or anything. I do try to follow things, obviously. I'm a pretty good, tax-paying citizen of this country. Let the business guy in there. It's not really working too well running it not like a business." Plus, Trump's campaign is "entertaining as shit."

He's not perplexed about Trump's campaign — in fact, if Trump wins, this guy might become Secretary of the Treasury. He initially declined Trump's offer of the position, but Ichan later took to Twitter to accept the potential post, before finally declining again in November. The famous billionaire investor has a history of taking significant stakes in troubled companies against their will and then working to turn them around — a few being Blockbuster, Western Union, and Herbalife.

Sure, Trump may be his second choice (at first, he was for Scott Walker), but Baio likes that Trump speaks on the same level as the former Happy Days star. "It’s very simple. When he speaks, I understand him. He speaks like I speak." If only that's all it took to become president — speaking like Fonzi's cousin.