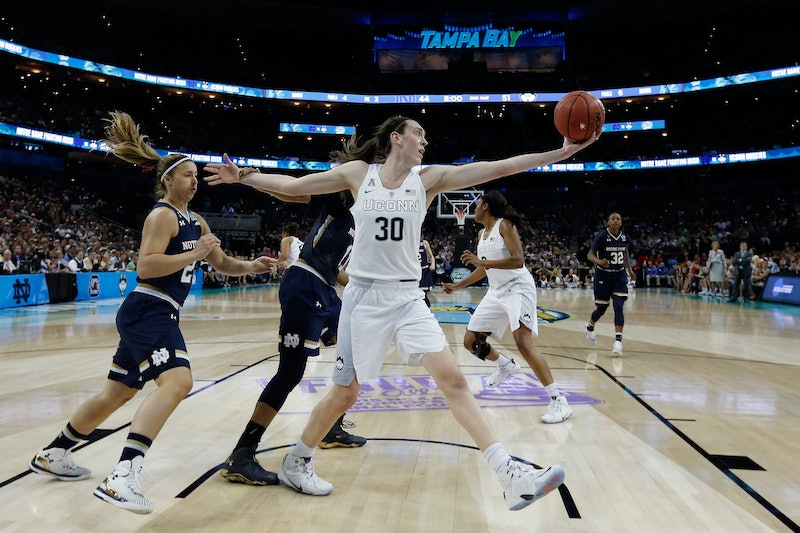 Each year, the NCAA basketball tournament awakens basketball fans' competitive nature. Quite literally, March Madness inspires madness. It's an excuse to bet money, plan watch parties, and scream at the TV. However, these seasonal events center on only one side of the coin. In 2016, I must point out, as a reminder, that both men and women play in the March Madness tournament. The men's college basketball teams are awesome — but the women's teams play just as hard, and deserve equal servings of sports-fanatic hype.

For example, while Michigan State's men's team shocked the nation by losing to Middle Tennessee in the first round on March 18, the university's women's team was beating Belmont. But unfortunately, the men's upset probably trumped the women's win.

CNN's Kelly Wallace reported extensively on the gender gap between coverage, marketing endorsements, salaries, and amount of fans in college basketball. She pointed out that NBA players make an astonishing 70 times more on average than WNBA players. In an interview with Wallace, Nancy Hogshead-Makar, a three-time Olympic gold medalist swimmer who advocates for the advancement of women in sports, said that by not demanding female athletes receive equal access to media, scholarships, and endorsements, colleges are actually violating Title IX:

This connection with sports and masculinity is a very tough nut to crack. People have been trying to crack it for a long time ... It's appalling what these huge differences are. Any fifth-grader can walk into your average high school or college softball baseball facility and say, 'Duh, that's not equal.'

As basketball fans and March Madness viewers, we can help the women's basketball teams gain equal recognition with the men's teams. But it goes beyond basketball. The repercussions of promoting women in all sports will help to break down society's stereotypes about how women must be fragile in order to avoid being labelled "manly." Unfortunately, this ingrained perception has rooted a stigma that subtly discourages society from covering women's sports in depth. In reality, however, there's no reason women can't be hella buff and feminine at the same time.

New York Magazine senior editor Jesse Singal wrote about the connection between a lack of coverage of women's sports and false gender stereotypes. According to a chart that compares the top 20 keywords in NCAA.com's articles on men's versus women's basketball, "pound" is the most used word in the articles about men. The word is not found in the women's top 20 keyword list. Nicholas Subtirelu, a Ph.D. student in the department of applied linguistics and ESL at Georgia State University, pioneered the study, and claimed that the difference in rhetoric is more revealing than meets the eye:

To succeed as athletes, they [women] are expected to be strong and powerful, but as women they are still often evaluated according to beauty standards that frequently favor smaller women. Journalists’ choice not to mention female athletes’ weight may prevent readers from having their attention drawn to what is ‘unfeminine’ about these women, their size and power, yet that size and power may be the very thing that their appeal as athletes depends on.

Singal dubs this double-edged sword one of the single most pervasive "taboos" in women's sports. Spreading positive messages about body image and encouraging diverse representation of women is the starting point in ameliorating the gender gap in sports. It's our job as media consumers to convey that we are not squeamish about judging male and female athletes by the same standards. That way, it shouldn't be difficult for journalists to apply the rules of men's coverage to that of women's.

In order to convince TV and newspapers to grant more coverage to women, we must also show that women's basketball is popular and in demand. This involves physically attending women's basketball games, and encouraging others to do so as well. The NCAA reported that over 11 million fans came to division I, II, and III women's college basketball games in the 2014-2015 year. During the same year, the men's college basketball teams attracted over 32 million spectators. In many ways, the discrepancy in coverage isn't ESPN's fault. It's the public's fault for not showing that they're equally as interested in watching women's basketball and they are men's. Higher attendance will lead to greater coverage. And if you can't attend a game, then tune in via television, because ratings matter.

Although the road to equal coverage is long, there's a lot of hope. Ten years ago, for example, women rarely played "rough" sports like hockey or boxing. Now you can go to a gym and see female boxers training with men. Slowly but surely, women's inclusion in many sports (minus football, among others) is becoming more normalized, according to Hilary Knight, a team member on U.S. Olympic hockey team:

It's just a gradual growth process that we kind of have to see through ... It's a slow process, but as long as you are changing the stereotype, and you are really empowering women and girls to feel proud of who they are and not hindering their progress in any way, I think we are going to see sport get to where it needs to be.

In addition to showing support for college athletes, we should also encourage girls in middle or high school to participate in the sports they love, whether it's wrestling, tennis, dance, or lacrosse. Promoting positive reinforcement is simple on social media platforms, thanks to a collection of inspirational videos from campaigns such as Procter & Gamble's #LikeAGirl, Under Armour's "I Will What I Want," or Sport England's "This Girl Can."

Each campaign seeks to urge girls and women to defy negative stereotypes associated with being muscular, active, athletic, and feminine. If we can spread this positive message and simultaneously create a support system, then the media will have no choice but to cover more, we will come one step closer to facilitating a system that is more friendly toward and appreciative of female athletes.