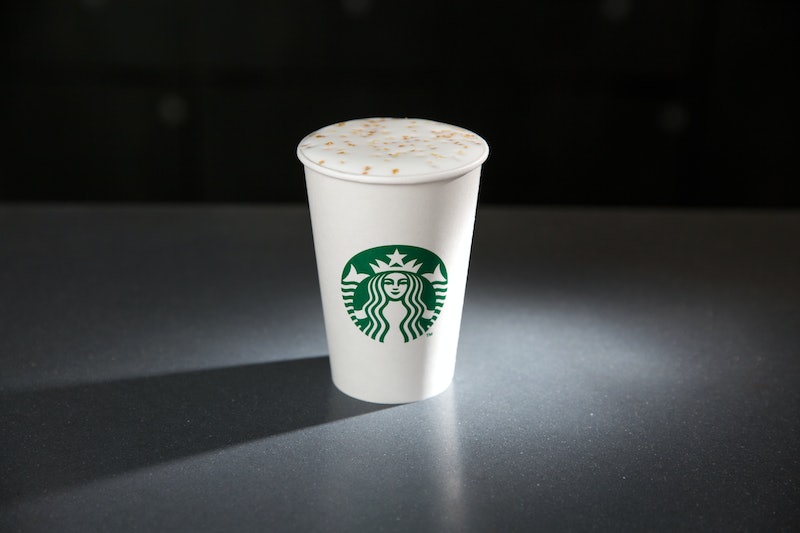 Every time Starbucks releases a new drink (which has been happening with some frequency lately), there are always a whole bunch of questions that pop up immediately afterwards. Consider, for example: Does the Starbucks Caramelized Honey Latte have caffeine? Well, good news: I have answers for you, and I’ve gotten them right from the source. Here’s the deal.

First things first: Yes, the Starbucks Caramelized Honey Latte has caffeine. I mean, it’s a latte, so this fact is mostly unsurprising; lattes typically consist of two base ingredients, steamed milk and either tea or coffee, both of which habitually contain caffeine. In this case, we’re talking about an espresso drink, so there’s a bit more caffeine than there would be in a tea latte: 75 mg in a Tall, 12-ounce Caramelized Honey Latte, to be exact, according to a Starbucks spokesperson. In comparison, a Tall, 12-ounce Starbucks Green Tea Latte has 55 mg of caffeine, while a Chai Latte (made with black tea) has 70 mg.

But! There’s good news for the footless and caffeine-free: Starbucks drinks are highly customizable, so you can always order your Caramelized Honey Latte decaf. While it’s true that decaf coffee and espresso aren’t totally sans caffeine — in espresso’s case, the decaf version can still have anywhere between three and 15.8 mg per shot — ordering a decaf latte will definitely cut down on your caffeine consumption.

While we’re on the subject of making your Starbucks drink your very own, here are a few key ways you can customize your favorite beverage:

Milk options at Starbucks include whole milk, two percent, nonfat, coconut, and soy. Using whole milk will result in a richer, creamier drink (because, well, whole milk); they all steam up just fine, though, so you do you, no matter what your milk preference may be.

That is the question.

Choose “with whip” for a spritz of creamy goodness or “no whip” to skip it.

According to the Tumblr Starbucks Order, this customization usually applies to Caramel Macchiatos; there’s nothing that says you can’t order any other kind of espresso drink that way, too, though, so for what it’s worth, ordering something upside down essentially reverse the order in which it’s made: If it’s typically put together starting with the espresso, then adding the milk, then adding the syrup, it’ll be made with the syrup step coming first, then the milk, then the espresso.