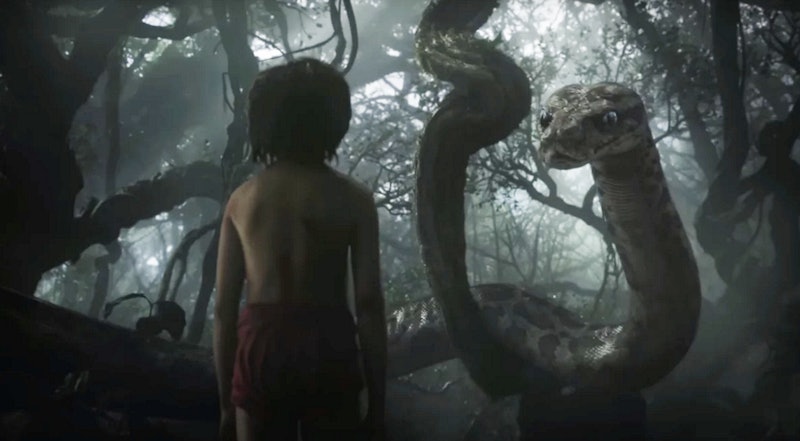 Hi, hello there, are you the person who designed the ad campaign where The Jungle Book voice actors pose with the characters they voice? Because if so, I'd like to shake your hand — this is some genius-level stuff right here. And I'll be honest, that's mostly because you've presented me with a photo of Idris Elba reclining on a tiger, in honor of his role as the villainous Shere Khan. But that's also because it's just a great idea in general to put these actors' faces in front of me, even though their voices are the only things I'll be exposed to in the film itself. I'm just one of those sociopaths who needs to see a facial expression in order to connect, don't mind me.

But then, we're also back to that Idris Elba thing. Because I will take a photo of him in any form, at any time, please and thank you. Even when he's smoldering into the camera as the human personification of a scarred-up old tiger, he's still smoldering into the camera, so I am A-OK. And just as some icing on top of that Idris Elba cake, there are photos of many of the other cast members as well. Just take a look at this embarrassment of riches.

Oh baby, oh baby. Then we have Scarlett Johansson with a big ol' snake because she voices Kaa.

Lupita Nyong'o as the wolf Raksha, adoptive mother to Mowgli.

Ben Kingsley as the panther Bagheera.

And Giancarlo Esposito as the wolf Akela, adoptive father to Mowgli.

This is exactly what I needed to get jazzed up about The Jungle Book, which hits theaters on Apr. 15. Great job everybody. You can all take the rest of the day off.