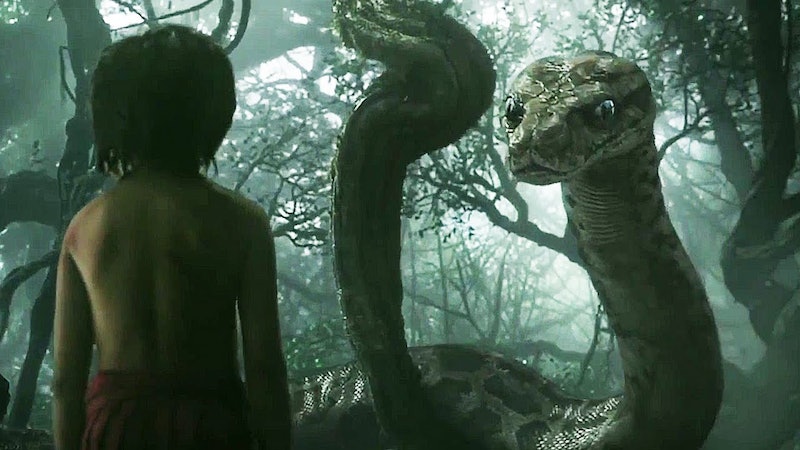 Created with motion capture technology and other visual effects techniques, this isn’t the technicolor cartoon Jungle Book of your childhood. But Disney is no doubt hoping that nostalgia will lure audiences to theaters to see this new adaptation of one of its golden age classics. This iteration of Rudyard Kipling’s book of short stories about a young boy raised in the wilderness is a blend of live action and animation, introducing 13-year-old Neel Sethi as Mowgli and surrounding him with an A-list voice cast. Just how A-List is The Jungle Book ’s voice cast? I’ll put it this way: more than one Oscar winner graced the movie’s sound booth.

"Pretty much everything you see onscreen other than the child is digital,” director Jon Favreau told Yahoo about the film. So the most well-known stars of the film did their work behind the scenes, with their voices adding personality to their digitally constructed animal counterparts. Still, The Jungle Book can boast one of the most diverse movie casts so far in 2016; one unforgettable character from the original film has even been gender-flipped to add another female role. So who will be threatening, persuading, and guiding young Mowgli during his journey back to the "man-village"? Read on to get to know the voice cast of The Jungle Book.

Luckily, Idris Elba's voice is as good as the rest of him, so I'm only slightly disappointed that he'll be a disembodied presence in this movie. The Beasts Of No Nation star was one of the first actors linked to the project and will take on the role of the regal and dangerous tiger, Shere Khan.

Johansson teamed back up with her Iron Man 2 director when Favreau decided to cast a woman to voice Kaa. Who better to fill the role of the charming, seductive snake who represents temptation in this coming-of-age tale?

The first trailer for The Jungle Book ends with an iconic image and a few familiar notes. Beloved Hollywood oddball Bill Murray is playing Mowgli's bear pal Baloo and yes, he will be singing "The Bare Necessities."

Fresh off of her voice and motion capture performance at Moz Kanata in Star Wars: The Force Awakens, Oscar winner Nyong'o plays another motherly character: this time, she's Raksha, the she-wolf who takes Mowgli in and raises him like one of her own cubs.

Unfortunately, Walken's tap-dancing skills will have to wait for his next role in a musical. The Academy Award winner plays the covetous King Louie, changed in this adaptation from an orangutan to a Gigantopithecus in an effort to be geographically accurate.

Wise and protective, Bagheera the panther guides Mowgli when he needs to, but also encourages him to make his own decisions. He's played by Sir Ben Kingsley, another Oscar winner and Iron Man alum.

Try to forget Breaking Bad's Gus Fring; Akela isn't a villain, he just does what he thinks he must. As the leader of the wolf-pack, Esposito is the one to send Mowgli away.

The Hour and Penny Dreadful actress Tointon is Winifred, an outspoken elephant and member of The Jungle Patrol.

With roles in both Game Of Thrones and the Harry Potter series, British actor Ralph Ineson knows his way around some CGI. His Jungle Book character is Rama, Raksha's mate and Mowgli's adoptive wolf-dad.

The young actor playing Mowgli's best friend and wolf step-brother Gray has also worked with The Jungle Book's director before, in his food truck comedy Chef.

The Jungle Book has quite a storytelling legacy to live up to and also a controversial history to change. Though most of its diverse cast won't be appearing in the flesh, the movie has the potential to be visually gorgeous and to counter the distressing depictions of race in the 1967 animated film.