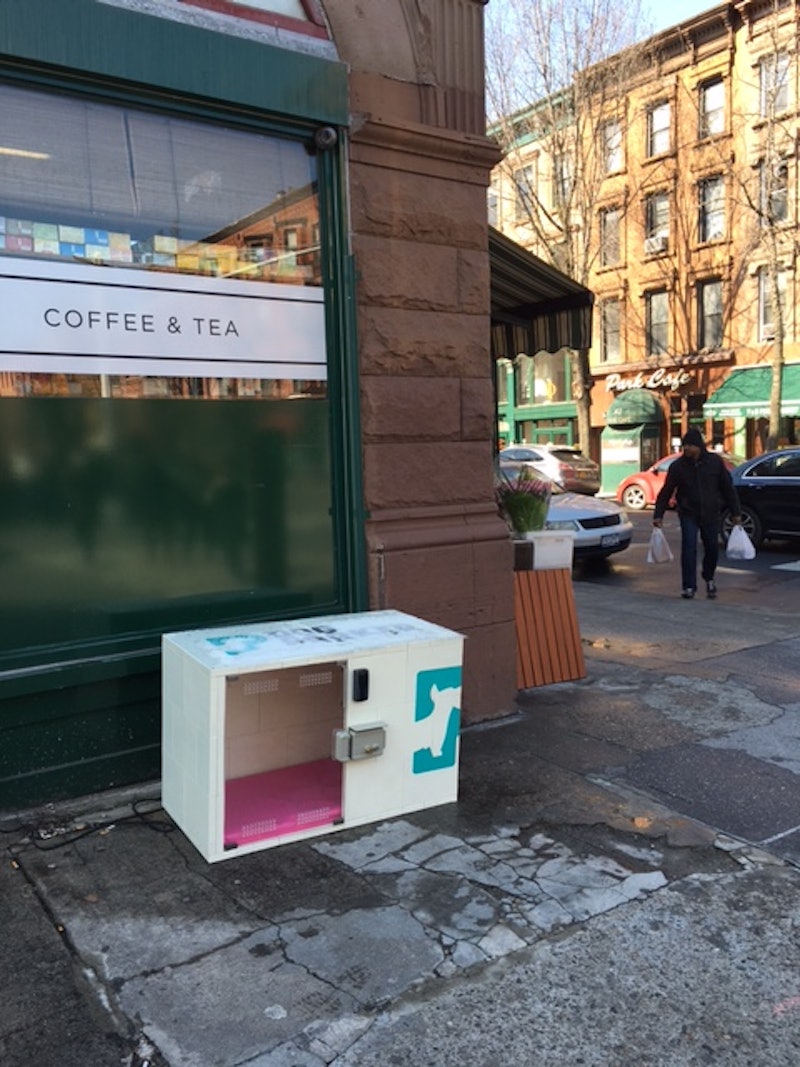 If you’re pounding the New York City pavement, you may soon notice something unusual outside your local deli — a white and pink crate with a clear plastic door. What looks like a fancy gym locker sitting on the sidewalk is actually a box you can park your dog in. And for many metropolitan dog owners, this new service offers a solution to one of the hotly-debated canine-centric concerns.

We’ve all come across dogs tethered to sign posts outside a cafe, or panting in the sun while their owners brunch nearby. With such busy schedules, dog lovers frequently have to choose between either leaving their pup at home on a nice day or tying them up outside and praying for the best. Dog Parker seeks to offers a safer, and more comfortable, alternative.

Founder Chelsea Brownridge told the New York Post that she was sick of leaving her dog, Winston, at home while she ran errands that were not all dog-friendly. “I ran into this problem dozens of times,” she shared, and so she sought to create a solution. According to the Dog Parker website, using the public kennel offers “the convenience of running all of your errands and living an active lifestyle with your best friend in tow.” It also offers peace of mind in a city where, unfortunately, “dog flipping” is a thing.

These crates, currently located outside delis, supermarkets and coffee shops are constructed out of breathable Polypropylene plastic, and come equipped with a waterproof floor cushion, and fans for temperature regulation. If the temperature inside becomes too cold or too hot, the Dog Parker goes out of service.

After conducting a pilot program this winter, with five locations around Brooklyn, they have plans to expand to 100 around the city this spring. Like all things in Brooklyn (stroller valet, food co-op), you do have to be a member to use the service. After your dog and their up-to-date vaccination records are approved, there is an annual membership fee of $25, and each use costs $0.20 a minute or $12 an hour. Dog Parker likens themselves to the ZipCar and Car2Go models — only after approval do they mail the card key, and reveal the exact locations.

Debra Iqbal, owner of 7th Avenue Gourmet, whose store was part of the pilot program, has had a Dog Parker outside since the beginning of the winter. She knows a few customers who use it and love it, and says it offers protection and comfort for the dogs. When speaking to Bustle, she confirmed that the little box attracts a lot of attention, and reactions vary: "Some people say that they like it, some say that it’s not necessary, some think ‘oh boy isn’t that so cute.'"

While the website warns that separation anxiety and whining may be a problem for dogs, even those who are crate-trained, Iqbal says she hasn't had any incidents of dogs becoming upset and that "they seem to really like it." And she believes the membership fee is negligible. “People are spending big money on their dogs already, whether on the food or vets,” says Iqbal.

Iqbal confirms that the team has been very attentive with the cleaning, and were the first ones out to shovel during the snowfall. The only issue so far has been power-related, since the lock and other crate gadgets operates on electricity. So be a decent human being and don't unplug it — cause that's not cool people.

You can leave your precious pup in the "dog house" for up to three hours in any 12 hour period, which is in accordance with NYC's anti-tethering laws. However, please, I beg of you, do not lock up your pooch and get smashed on bottomless mimosas for the max amount of time.

So, should you leave your dog in what Gothamist describes as "a tiny jail cell"? I believe from a comfort and safety position, the answer is "probably, yes." Dog Parker does rely on people to be responsible adults, who treat their dogs and the equipment with care. And if we all cooperate, this could be a cool program from the city. As Iqbal says, “Everyone’s going to have their opinion. So if you don’t want to use it — you don’t use it, but I think it’s a good idea.”

Watch this video and see Dog Parker in action: