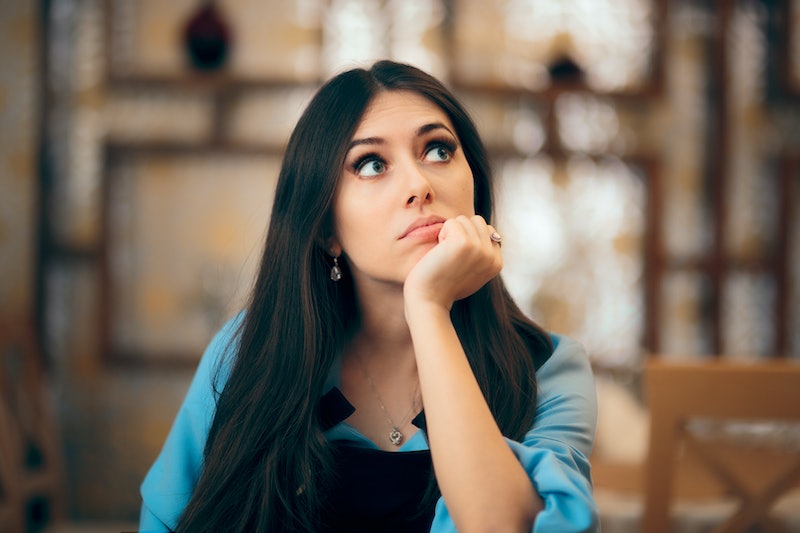 Over time, we can internalize gender roles so deeply that they become engrained in the way we sit, stand, walk, talk, and gesture. There are many aspects of our body language that are gendered without our awareness. The ideas we learn about masculinity and femininity pervade every area of our lives, and they lead us to use our bodies in different ways depending on how we were socialized.

Many of the social conventions surrounding our body language stem from the notion that women should take up less space, Georgetown linguistics professor Deborah Tannen tells Bustle over the phone. "There's pretty good evidence that more space is related to more power, just like the more important you are, the bigger your office," she says. One study in Psychological Science found that assuming postures that take up more space makes people more likely to cheat, violate traffic laws, and engage in other entitled behavior. Feminist philosopher Sandra Bartky has argued that “massiveness, power, or abundance in a woman’s body is met with distaste."

This idea that a woman should be small and unimposing also feeds into sizeism. “In my experience, the weight was this metaphor of ‘I need to be smaller, I want to take up less space in the world,’” actress and eating disorder survivor Jessie Kahnweiler told Matters of the Mind. Weight loss can be one way women often make themselves smaller; our everyday body language is another.

Here are some ways we might not even realize we're performing gender through the way we position and move our bodies.

1. How We Space Our Legs

The tendency for men to keep their legs farther apart than women when they're sitting is so common it has a name: "manspreading." "If you're sitting on an airplane or in a theater, you're happier with a woman next to you than a man because a man is much more likely to spread his knees," Tannen tells Bustle. Women, on the other hand, will cross their legs and contain their bodies to avoid infringing on anyone's personal space.

2. How We Use Armrests

Another reason to be glad if you're next to a woman on a plane? She's less likely to take up the shared arm rest. This is partially because men are taught to take up more space, says Tannen; however, this pattern also may exist because men are less fearful of making physical contact with strangers. "Men either don't mind or maybe seek it or simply trust that the other person will back off, especially if it's a woman," she says. If two men are next to each other, however, sometimes a power struggle over the arm rest will ensue.

3. How We Carry Books

Men tend to carry books at their sides with one arm, while women hold them up to their chest, said Tannen. It's not clear why, but one study in Perceptual and Motor Skills found that women with more masculine identities tend to carry books more like men typically do, suggesting that the difference has a basis in gender roles. Perhaps men only feel the need to use one hand because they're more confident in their strength.

4. Where We Look When We Talk

Women tend to face one another and look one another in the eye when they're talking, Tannen says, while men might perceive direct eye contact as a threat. This habit occurs cross-culturally, suggesting it might have a biological component, she adds. However, according to Pink Brain, Blue Brain by Lisa Eliot, several studies have found no differences in eye contact among newborns, suggesting that the difference that eventually develops could have to do with the way we teach girls to be more social and communicative than boys.

Women tend to nod more than men, according to a study in Psychology of Women Quarterly, which can be a sign of submission and approval toward the speaker. The same study found that students nod more to professors than to other students, confirming that differences in nodding, like many gendered body language differences, are likely due more to power disparities than biological ones.