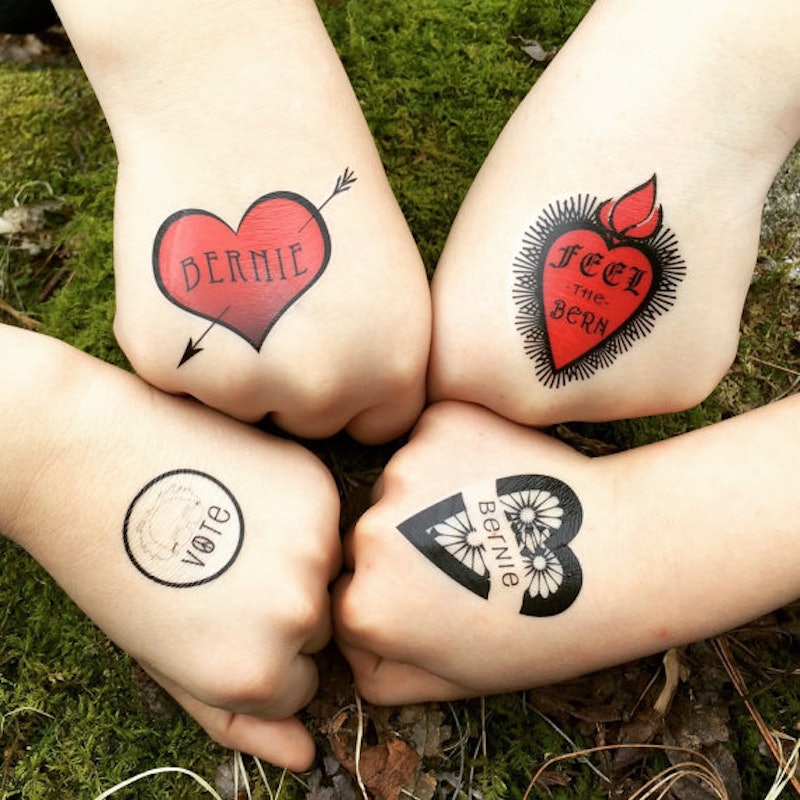 Although I'm not an American, myself and the rest of the world seemingly can't help but get caught up in all the excitement. Heck, I even want to stock up on Bernie Sanders clothes and accessories with which to show my support for a candidate whose democratic socialist views resonate with my own. I'm feeling the Bern, and I make no apologies for that.

Of course, half the reason I want some Sanders merchandise is down to how cool and fun the designs are. Just a quick scroll through Etsy left me seriously impressed with the creativity and talent of those taking their support for the Democratic candidate and creating something entirely new in order to express said solidarity.

This kind of fan worship simply doesn't happen when it comes to British elections. We tend to prefer being angry on Twitter and sometimes sticking a small sign in our windows. The circus surrounding American elections is not only intriguing, but enough to make me wish I could get involved.

Maybe I will take the plunge and order some novelty Sanders T-shirts for my wardrobe and hope that people get the reference. My advice to everyone else is to take advantage of the wonderfully OTT media coverage of this election and invest in some unique political earrings, at least. Here are my 21 favorite items on the market.

The kind of paradise Sanders is offering with his political policies is pretty magical, IMO.

A simple, cute pin that you can attach to any outfit is irreplaceable.

Bern It Up T-Shirt, $15, etsy.com/irreverenthouse

If you want to simultaneously shout-out Kanye West and Bernie Sanders, this one's for you.

These are just too funny. They're not about trying to be sexy with your politics. They're just practical.

Not to celebrate the waist training fad per se, but this corset would go perfectly with your brand new Bernie Sanders underwear.

Get those Napoleon Dynamite vibes with this throwback T-shirt.

With free shipping, there's no reason not to get this super patriotic bow tie.

You don't even have to ruin your goth aesthetic to feel the Bern. Represent both interests with this awesome T-shirt.

How better to show off your adoration for Sanders than by wearing a collage of his face?

This is a subtler way of saying that you're feeling the Bern.

If you don't immediately buy this cap, all your cool points will be officially revoked.

Comfortable, simple, and you could totally buy it for your partner and then just keep it for yourself.

Throw it back to the '60s with this hippie, dippy, and trippy T-shirt.

Just in case anything goes wrong, I'd recommend not getting permanent Sanders ink just yet. That means these temporary tattoos will be the perfect replacement until you can get the real thing. Plus, they're just really fun!

17. Bernie To The Future T-Shirt

Bernie To The Future T-Shirt, $14.99, etsy.com/forshirtssake

This shirt is just ideal.

These dream-colored leggings could be the perfect solution for anyone who prefers a plain tee and a patterned leg look. Celebrate Sanders on every limb!

Get ready for leg-baring weather and show off these amazing Sanders socks.

As a massive Futurama fan, I definitely let out a little scream when I saw this. It's available in six colors, so you have no excuse not to cop this brilliant sweatshirt.

With that name, you just have to get ahold of this awesome hat.

Perhaps it's a little weird that this British woman took so much time to look at (and drool over) these amazing Bernie Sanders clothing and accessories. Regardless, I'm glad to provide the service to Sanders fans so they know that such cool ways to show support exist.

Want more fashion and beauty tips? Check out the playlist below and be sure to subscribe to Bustle's YouTube Page for more hacks and tricks!