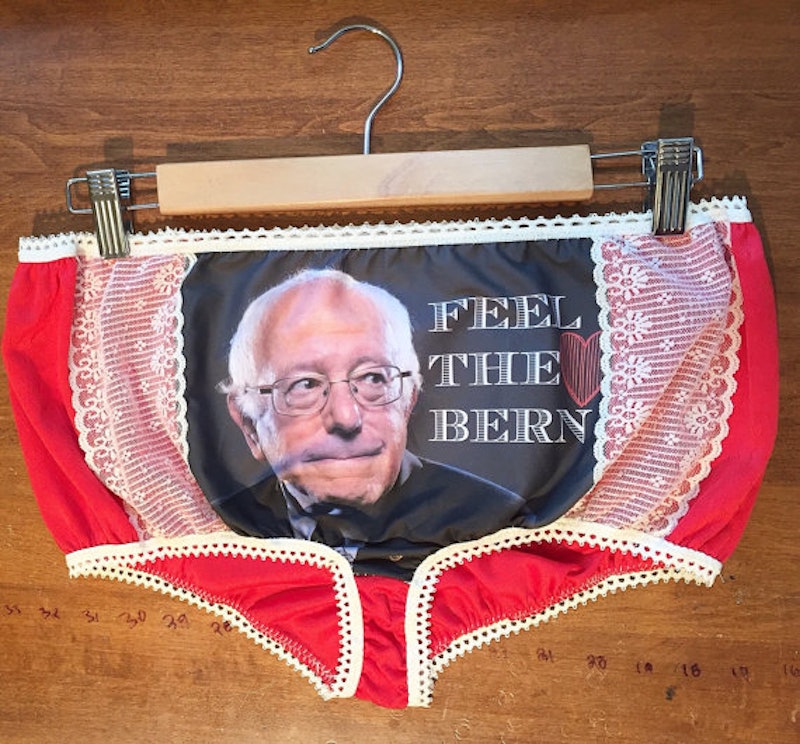 There exists a mantra that says you should never discuss politics or religion on a first date, but how could you not when there are so many spectacular Bernie Sanders Valentine's Day gifts out there? And with Sanders' predicted win in the New Hampshire primaries, it's possible that this presidential hopeful may be a hot dinner topic at your V-Day events later this week.

While some have claimed that women should support Clinton's bid based on her gender, Sanders has his own impressive record when it comes to women's rights. With his statements on intersectional feminism, reproductive rights, and education, Bern has won the hearts of many Millennials who identify with his messages.

And everything from Sanders' hair to his quips have become Internet fodder for not just memes, but also creative apparel, accessories, decor, and other gifts. Leave it to the Internet generation to show its political support through handmade prayer candles, artwork featuring Sanders on a unicorn, and T-shirts with slogans that play on pop culture and song lyrics.

When love is in the air on Valentine's Day, who says that it has to be romantic love and not a deep desire to fight the 1 percent and support some independent artists in the process? And why bring your valentine roses when you can bring them handmade red Bernie Sanders panties instead? Let your love bern with the following gifts.

Gay rights have been an important issue in the Democratic debates and Sanders' record has been part of that debate. But if you and bae support Sanders and LGBTQ rights, then this tee is the perfect Valentine's Day gift.

Bernie is bae definitely has a nice ring to it. I can totally see this sticker pack covering the lockers of those just-turned-18 voters' lockers.

4. Bernie On A Unicorn

I think the title of this print ("Bernie Sanders Riding An Alacorn Wielding The Sword of Truth") really speaks to the level of Bern this artist is feeling.

5. Talk Bernie To Me Valentines

Something tells me that Sanders would cringe at a "oh baby, talk Bernie to me," V-Day card, but I think these are totally rad for the Sanders supporters in your life.

Write your valentine a poem about justice and equality in this Sanders-y spiral notebook.

Roses may be red, but so is this super comfy Sanders support tee.

This hand-drawn Bernie Sanders self-inking stamp is a perfect way to campaign for your valentine's heart. It's also important to note that this shop offers custom couples Valentine's Day portrait stamps for a more traditional gift.

This pin features an original illustration of Sanders and 25 percent of the sales go towards his campaign.

I actually laughed out loud when I saw this shirt because Sanders has that whole running for president with bed head thing down.

The fact that these Bernie Sanders leggings exist is phenomenal. And the fact that they are handmade is something I think even Sanders himself would approve of.

Help your valentine store all of their school books and pray that free tuition becomes a reality with this Bernie Sanders tote bag.

These earrings studs made of Bernie Sanders' face are much more budget-friendly than a pair of diamond ones.

Even though it was Trump who recreated Drake's "Hotline Bling" for SNL back in November, I have a feeling that people would much rather see Sanders attempting Drake's now-signature moves.

16. My Heart Is BERNing For You

Bern puns never get old for me. This card is a great way to treat your socially conscious valentine with a sense of humor.

I can only imagine what Sanders critics will have to say about this, but hey, it exists. And that's all that matters.

Valentine's Day doesn't have to be purely romantic and devoid of any political leanings. So why not treat your partner or yourself to something that proves you'll be feeling the bern at this year's polls?

More like this
42 Black Owned Fashion & Beauty Brands To Support Today & Always
By Mekita Rivas, Shea Simmons, Kui Mwai and Dominique Norman
How To Protect Your Scalp From The Sun, According To Derms
By Paris Giles
4 Game-Changing Makeup Hacks For Oily Eyelids
By Hilary Shepherd
Why Experts Prefer "Dry" Pedicures For Healthy Nails
By Danielle Sinay
Get Even More From Bustle — Sign Up For The Newsletter