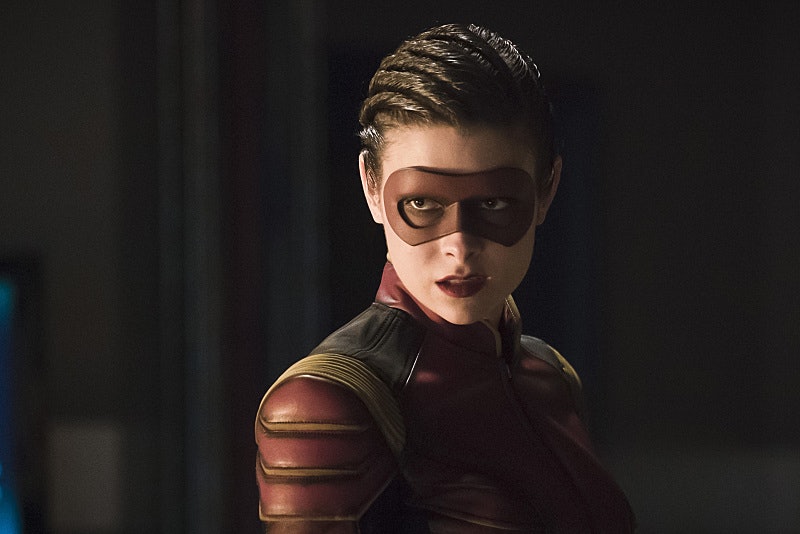 The Flash has introduced a whole slew of different metahumans in its first two seasons, but only a handful of speedsters — and most of them were/are evil (aside from Barry Allen, of course). Both Earth-1 Harrison Wells (aka Eobard Thawne aka Reverse-Flash) and Zoom have given Barry a run for his money for the title of the Fastest Man Alive. Now, The Flash is introducing its first female speedster. But, who is the new speedster on The Flash and how will she affect Barry's life in Central City?

According to TV Line, Allison Paige was cast as Eliza Harmon aka Trajectory for the character's upcoming appearance in the episode titled for the speedster: "Trajectory." In DC Comics, Trajectory is a minor character, only appearing in a limited run of issues. In the DC mythology, Eliza Harmon received the power of superspeed from DC villain Lex Luthor, but she wasn't able to slow down unless she took a specific drug that slowed down all the processes of her body. Although Trajectory wanted to become a member of the heroic team of Teen Titans, Luthor stripped her of her superspeed in the middle of battle and she was killed — so Trajectory's story doesn't have a happy ending by a long shot.

However, based on the promos for the episode, it seems when Trajectory arrives on The Flash she won't have any of the comic book character's desire to be heroic. Instead, she'll be a mischievous speedster, committing petty crimes like stealing purses and generally causing mayhem — all helping to tarnish the reputation of Barry Allen's Flash. Additionally, according to the synopsis for "Trajectory" released by ComicBookResources, the new speedster has nefarious reasons for showing up in Central City:

THERE IS A NEW SPEEDSTER IN CENTRAL CITY; WILL THE FLASH BE ABLE TO KEEP UP? – Deciding to blow off some steam, Barry (Grant Gustin) and the team head out for a night on the town only to encounter an unexpected speedster who is up to no good. Iris (Candice Patton) is challenged by an assignment from her new boss (guest star Tone Bell), and is surprised when friction turns to flirtation.

As for the reason behind her visit, a scene released by The CW ahead of the episode seems to hint that Trajectory is in town because she needs Velocity 9 (the drug Caitlin Snow engineered to give Earth-2 Jay Garrick his speed back):

If we read between the lines of dialogue in this scene, we can get a better idea of how Trajectory received her speed. It seems she became a speedster through some type of substance like Velocity 9, rather than the particle accelerator explosion that gave Barry his powers. Plus, it seems she needs Velocity 9 to maintain her superspeed — and she'll do anything to get it.

Sure, Barry facing off against another speedster may have been done before on The Flash. But, it'll be exciting to see the first female speedster go toe to toe with Barry and give the Fastest Man Alive a literal run for his money.