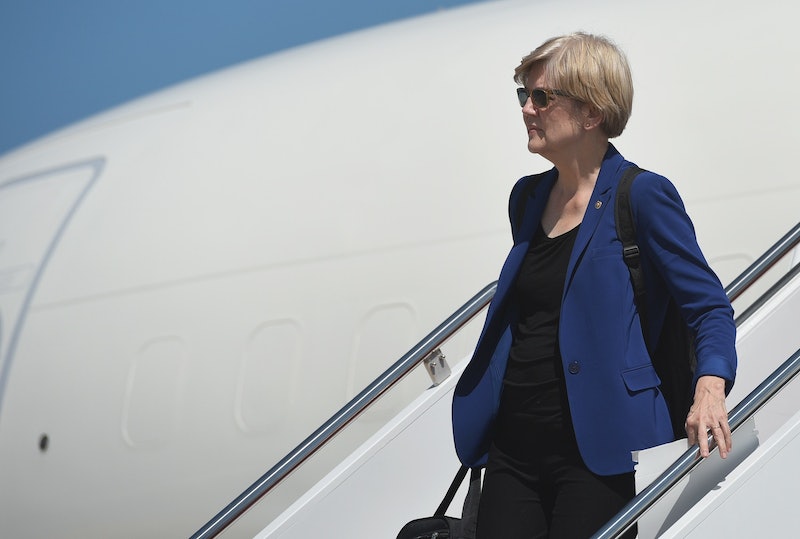 Aside from periodic Facebook posts and tweets calling for prosecution of Washington insiders and regulation of Wall Street, Elizabeth Warren has generally remained under the proverbial online radar. The Ready for Warren campaign that fought for her to run for president is long ended, and the senator from Massachusetts has kept to her work within the Senate for the most part. Recently, however, Liz Warren decided to make a few jabs at Donald Trump and his aspirations to hold the nation's highest office. She hit him where it would probably really hurt the guy, calling him — gasp — a loser, and not once, but multiple times.

What exactly did Warren have to tell Trump? Well, first, she made note of his business record — the failed part — presumably referencing his four well-known Chapter 11 reorganization bankruptcies. Trump has argued that he used a common business decision in filing for bankruptcy. For the average businessman, this is a poke right in between the ribs — a blow to a person's pride. For Trump, however, this could mean a publicized Twitter war. This is especially so because she claims he fooled people with Trump University, calling it a "scam," and then calling him a "loser." Trump has denied any wrongdoing and claimed that Trump University has been highly rated by students.

He's not going to like Warren's tirade against him, but whether he responds or not is probably pretty dependent on his mood — he is known for delayed retaliation, even when he doesn't immediately remark.

Warren then cited Trump's use of bankruptcy to keep his father's business afloat.

She even mentioned that financial experts said he should have put his inheritance into an index fund and left it alone, again calling him in so many words a poor businessman.

She insisted he knows he is a loser, and continued by throwing out into the Twitterverse his moments of misogyny, bullying, racism, and narcissism.

Even so, Trump could still win the Republican nomination and the presidential election at large. Scary.

His morals are not American morals, and not what this nations stands for — decency, community, and concern for one another — she tweeted.

Taking her argument a step further, she explained that other authoritarians were also unpopular at first, so he could actually affect the U.S. in a really dangerous way.

She clearly does not want him to win this nomination, and encourages Americans to vote.

America cannot have a xenophobic, hate-mongering and fear-mongering president in this age of progression.

Wow, she even went to the Hitler comparison. Apparently, Trump is all right with people calling him an authoritarian. This is clearly concerning to Warren.

She ends her tweeting spree by stating that it is the job of Americans to stop Donald Trump.

In case Twitter did not reach enough followers, Warren also posted a similar message to her Facebook page. The connotation of her message speaks to the anger she feels, and how desperate she is for other Americans to empathize with her. She is a thoughtful senator, but ever-fiery, and this message in full is exemplary of her passion.

It is wholly clear that Warren — like most progressives — does not want to see a Trump presidency, though only November will reveal what the nation decides. A thoughtfully passionate election is always superior to an irrationally angry one. She knows this, and hopefully, so does America.