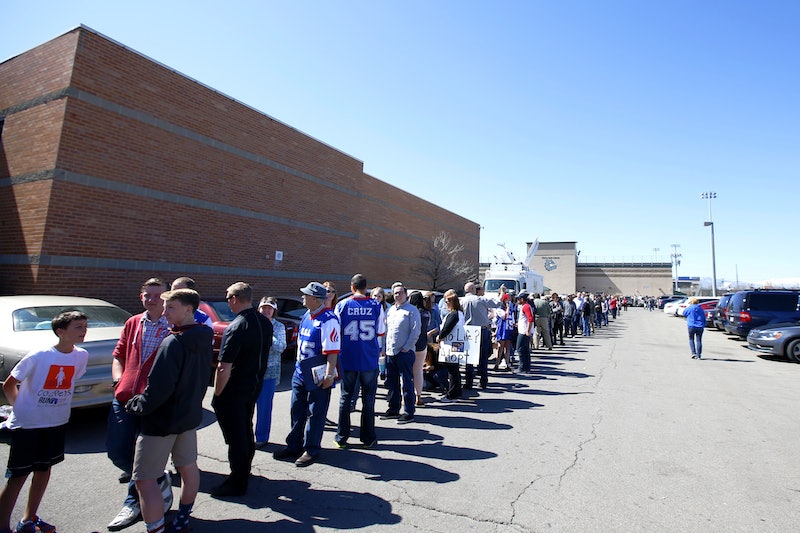 Yet another set of caucuses and primaries are upon us on Tuesday. Three states as well as American Samoa will be participating in the presidential nominee selection process. All eyes are on Utah, however. The Beehive State will be doing something truly unique for its Tuesday night caucus. Republican voters who've registered to vote online by March 15 will have the opportunity to cast their votes digitally. The special designation is only available for GOP voters, offering Utahans on the right copious opportunities to cast their ballot, to the point that results may not be revealed until the next day. So, what time do the Utah polls close?

It's going to take quite a while before all the votes are tallied for the Utah Republican Caucus. Only registered Republicans or those who affiliate themselves with the party can participate in the Utah Republican Caucus. Those who are registered to vote online can do so from 7 a.m. all the way to 11 p.m. Absentee day-of voting is also available. GOP voters looking to head to their nearest precinct to caucus in person can do so starting at 7 p.m. According to the Utah GOP, the event is set to last around two hours, thus caucus-goers can expect to be at their respective locations until around the time that online voting closes at 11 p.m. The Utah GOP caucus is a winner-take-most affair that may see one lucky Republican presidential hopeful snatch up all 40 delegates, provided they receive 50 percent or more of the vote across the state.

As with all other Democratic caucuses and primaries, the Utah Democratic caucus is proportional. Voters on the left will have the opportunity to caucus starting at 6 p.m. on Tuesday and lasting until 8:30 p.m. So long as voters are in line at their caucus site by 8:30 p.m., they will have the opportunity to participate. The Utah Democratic Caucus is an open event, thus even if you're registered with a different political party or simply unaffiliated, you can still cast your vote. What sets the event apart from many other caucuses is the fact that it's essentially drop-in. Democratic voters don't have to stay the full two and a half hours and can simply cast their vote and leave if necessary. Thirty-seven delegates are up for grabs on the left.

Though the Utah caucus is expected to last until the late evening, the results might be decided quite quickly once polls close. According to a recent Y2 Analytics poll, Texas Sen. Ted Cruz has a substantial lead on the right. Based off the 53 percent he's getting in that poll, Cruz stands to receive all 40 delegates. On the left, Vermont Sen. Bernie Sanders appears to be leading frontrunner Hillary Clinton with 52 percent, according to a recent Dan Jones and Associates poll. The results of that poll had Clinton at 44 percent with the remaining 4 percent reportedly undecided about who they'll be voting for. Utah voters have plenty of chances to cast their ballots, however, and it appears to still be anyone's caucus to win.