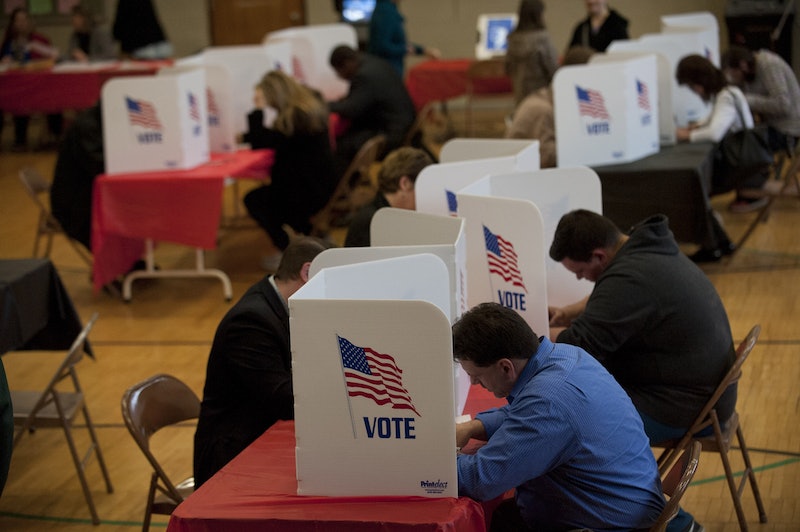 Utah Republicans and Democrats will hit the ballot boxes Tuesday to decide which presidential candidates their state's delegates will go to at the parties' conventions this summer. Although the primaries started almost two months ago, it's hard to keep track of all the rules, especially since they vary from state to state. The Beehive State is even more unique than most because of one thing Utah caucus-goers can do that voters in every other state wish they could: cast ballots online. So they don't have to be caucus-goers at all — just caucus-clickers.

The luxury of voting on a computer, smartphone, or tablet from home is only granted to Republican voters, meaning Democrats have to caucus the old-fashioned way on Tuesday, with paper votes. The Utah Republican and Democratic parties are running their own primary elections this year, without help or funds from the state, giving the GOP an opportunity to try something new to encourage more people to participate. To take advantage of the simplified system, all Utah voters had to do was register to vote online before March 15 (unfortunately, it's too late to register now) and log on with their given PIN number between 7 a.m. and 11 p.m. local time Tuesday to cast their vote for a Republican nominee.

Along with making voting more accessible, the online setup is also more informative than regular caucuses. The Utah GOP's website explains that each candidate will have a link next to their name offering information about them and their beliefs. So if voters log in to cast ballots with no prior knowledge of Donald Trump, Ted Cruz, or John Kasich, they'll at least have a little bit of information to help them make a more informed decision than blindly choosing whichever name sounds the most appealing.

The biggest fear around online voting is security, but the Utah GOP is confident that the system won't have any issues, and that it's actually safer than paper voting. The party contracted Florida-based SmartMatic, which implemented online voting in Estonia, to set up and run the online vote.

Unlike the Arizona GOP primary taking place the same day, Utah's delegates will not all go to one person. Many states operate on a winner-take-most system, and Utah belongs to that camp, with its 40 Republican delegates divided up between the state's four congressional districts. With the Republican race down to only Trump, Cruz, and Kasich, the man who wins the most votes overall in Utah will automatically be awarded 28 delegates. Then, the winner of each district will be allocated three delegates. The winner-take-most system allows more than one candidate to walk away with some delegates for the convention, but it's still possible for one Republican to win all 40 by crushing his rivals in every district (as Trump did in the South Carolina primary in February).