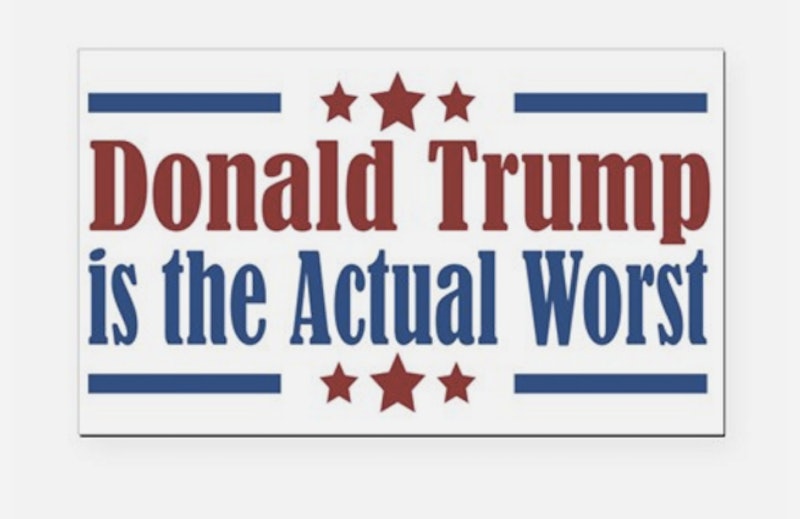 Monday morning, a group of volunteers passed out #NeverTrump stickers outside of a Donald Trump lunch at Jones Day on Capitol Hill in Washington, D.C. Whether you are a conservative, a liberal, a Republican, a Democrat, or identify with a totally different political affiliation, you might be wondering where you can get a #NeverTrump sticker of your own. You're in luck because there are a few different online stores that have the #NeverTrump stickers in stock, so you can make your pledge to never vote for Trump — and never means never — loud and proud.

The volunteers who passed out the stickers on Monday are associated with the Never Trump political action committee, which "supports grassroots efforts by conservatives and Republicans to stop Donald Trump," according to its website. The group's two objectives are that Trump never becomes the leading voice of conservatives, and that he also never become the U.S. president. It's safe to say that there are plenty of people outside of the conservative and Republican camp that are just as committed as liberals to stopping the Republican frontrunner from receiving the nomination for president as well. Just look at the protests that have happened around the country, in Chicago, in Kansas City, and most recently in Arizona and New York City.

You can get your own #NeverTrump stickers at the four following online stores.

Sorry, Marco. We know you're no longer in the race for the White House, but your #NeverTrump attire probably still appeals to a lot of consumers. When you visit Rubio's campaign store, you will find many #NeverTrump options, like the small removable stickers for $5, or a red #NeverTrump cap that matches the "Make America Great Again" hats.

Redbubble has a small Never Trump sticker that you can find on their website. And for the low, low price of $2.40, you can join the cause. If you buy six of them, you'll get 50 percent off! What a deal.

Zazzle has some good sticker options as well, with a #NeverTrump bumper sticker that sells for just $3.95. Show off your patriotic spirit with this cool bumper sticker. You want everyone to know how much you love your country, and you'll definitely do everything you can to stop Trump, one sticker at a time.

Cafe Press can also help you out with an assortment of #NeverTrump attire from bumper stickers, to car magnets, to key chains (oh my!) so you can really coordinate how to spice up your ride. Bumper stickers are going for $4.29, car magnets for $8.99, and keychains for $11.97.

You can definitely make these purchases to show your support to the cause of keeping Trump out of office, but remember, the best way to make that happen is to get out and vote. You can also organize your own anti-Trump events in solidarity (if you feel capable of doing something more large scale).