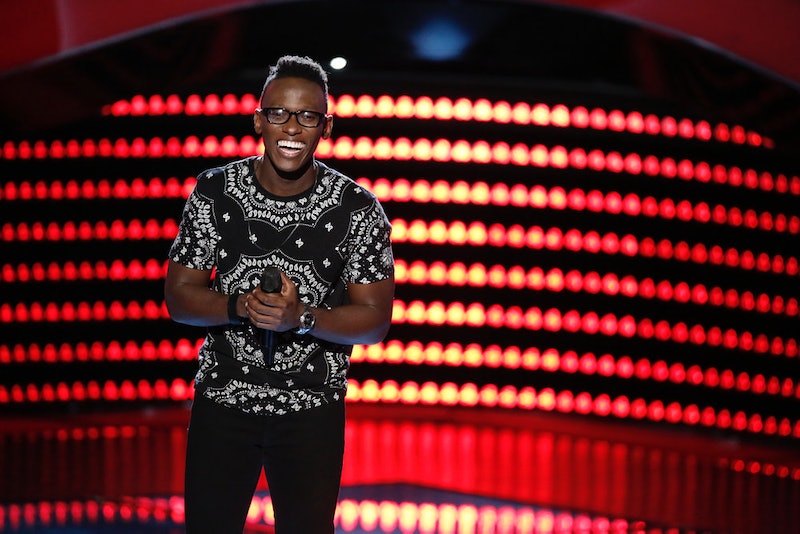 The best part about The Voice Battle Rounds? The steal. And none was sweeter than when Brian Nhira was stolen by coach Adam Levine — especially since it seemed as if Pharrell had planned Nhira's loss to end this way. Nhira battled fellow Team Pharrell member, Abby Celso, to Marroon 5's "Sugar." The two completely transformed the dance hit into a smooth, emotional duet. While both contestants gave a killer performance, Nhira's was a little bit better. But Coach Pharrell didn't agree. Well, at least that's what he wants you to think.

During the battle, Nhira seemed like the clear winner. His voice was smoother and all-around more polished than Celso's. The coaches even agreed that Nhira clearly won the battle — Pharrell was the only one to disagree. Or did he? Pharrell made one comment that calls in to question whether or not he wanted to let Nhira go. He said that both artists needed to stay in this competition. Not deserved to be, but needed to be. After hearing his fellow coaches' commentary, it was doubtful that Celso would get stolen if Pharrell had let her go. In order to keep her in the game, he saved her and prayed that Nhira would get picked up by a more fitting coach — which was pretty likely to happen since the coaches made it clear that they believed Nhira to be the winner. Thankfully, Pharrell's plan worked. Both Adam Levine and Christina Aguilera hit their buttons for the steal, and Nhira chose to join Team Adam.

While this is all a theory, it does seem pretty possible. And if it is, in fact, true, then it goes to show how selfless a coach and producer Pharrell really is. Nhira is someone that could win this competition. And with Adam Levine as his now-coach, Nhira's chances are even better. Pharrell may have just given his ticket to the finale over to another coach and he knows that. But it was so he could help Celso improve as an artist, and that has to be the best reason ever to give up another, more talented contestant. Here's hoping they both excel in this competition and make Pharrell's scheming work it.

More like this
What Is Ariana Grande's Net Worth? When It Comes To Money, She Has No “Problem”
By Hugh McIntyre
Travis Barker Has Been Hospitalised In California
By Sam Ramsden
How To Listen To The 'Love Island' 2022 Soundtrack
By Liv Facey and Sophie McEvoy
Tristan Thompson Plays Drake’s Best Man In A Music Video Wedding With 23 Brides
By Grace Wehniainen
Get Even More From Bustle — Sign Up For The Newsletter