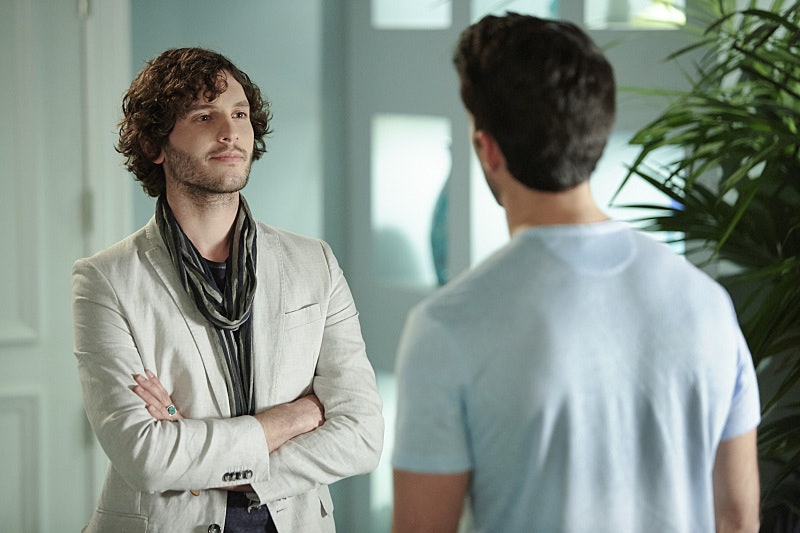 If there's one thing that my many years of watching television has taught me, it's that you should never assume that someone is trustworthy. So you can imagine how hesitant I am to believe that Rafael's brother, Derek, can be trusted on Jane the Virgin . Sure, he may have won Rafael over with a bottle of Scotch and an apparent heart-to-heart, but I have a sneaking suspicion that he knows more about their mother, Elena (aka Mutter), and her extensive criminal activity than he's let on. First of all, we went completely AWOL right around the same time Elena was revealed to be a notorious crime lord, then he suddenly reappears just when Rafael starts investigating his whereabouts. Is it just me or does someone seem to be extremely well connected? Almost as if he's purposefully trying to hide something.

Now, do I have any concrete evidence to back my suspicions up? Not exactly. But, in a way, that only makes me more sure that there's more to this character than meets the eye. Derek claims to have been just as in the dark about their mother's shady life of crime — a statement which Rafael seemed to eat up without question. In fact, he even called Michael right in front of Derek so that he could see Rafael end his partnership with the police. That's how much Rafael is choosing to trust him... a decision I think he may later come to regret.

But, of course, maybe I'm not giving Rafael enough credit here. Maybe he actually doesn't trust Derek, but severed his ties with the police in order to better gain his brother's trust. Either way, he's playing a dangerous game. In my opinion, anyone connected to Mutter is bad news and I'm worried that this little family reunion will eventually end in disaster.