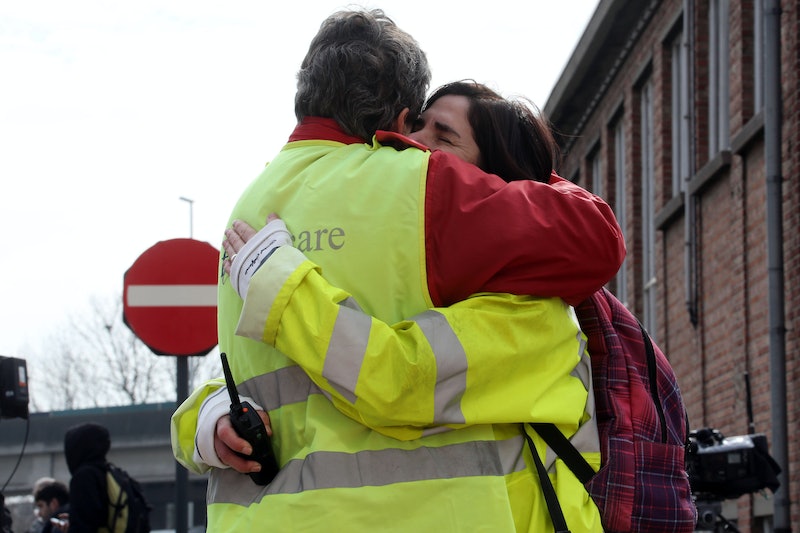 The world is in mourning after bombs detonated at Zaventem airport and Maelbeek metro station in Brussels, Belgium Tuesday morning. Newsweek reports that 34 people have been killed in the Brussels attacks, but that number could very well rise. While no group has taken responsibility for the bombings in the hours directly after the attacks, Newsweek also reports that ISIS supporters are celebrating the attacks that came just days after the capture of Salah Abdeslam, a suspect in the Paris attacks. Update: ISIS has claimed responsibility for the Brussels attacks in an announcement via Amaq, a news service affiliated with the group.

Around 8 a.m. Tuesday morning, two bombs went off in the departures terminal of Brussels' airport in the municipality of Zaventem where CNN reports that 14 people were killed. What follows are first-person accounts from the scene of the airport bombing.

We were going to check in around 7:30 a.m. There were seven of us. We were a bit late. We heard a big noise and saw a big flash. My mother went to the floor — she was hit. I just dropped my luggage and went to the floor. A kid came out, bleeding a lot. I tried to help him with a tissue, but it was not enough. There were two bombs.

The New York Times also quoted Malaysian traveler Belinda How, on line to check in for her flight when the first bomb went off in the airport:

I was the last passenger queuing up. I was very close to the first blast. Everybody was screaming. ... I said to my son — he is a Down syndrome special-needs child — "You have to run." He said, "My leg hurts." I think he was panicked. I left my luggage, dragged him and ran. Before I ran out, there was another bomb.

The Guardian included an account from 40-year-old passenger Jef Versele of Belgium:

I was on my way to check in and two bombs went off — two explosions. I didn't see anything. Everything was coming down. Glassware. It was chaos, it was unbelievable. It was the worst thing. There were lots of people on the ground. The bomb came from downstairs. It was going up through the roof. It was big. About 15 windows were just blown out from the entrance hall.

Luke Mac an Bháird, an Irish law student currently studying in Belgium, was at the airport waiting to board a plane to Dublin when the bombs went off. He tweeted multiple times from the scene of the attack:

Many publications also included eyewitness accounts of the bombing at Maelbeek metro station — located near the European Union headquarters — which occurred an hour after the attacks at the airport. CNN reports that 20 people died in the attack at the metro station.

The New York Times spoke to 31-year-old Brian Carroll from Washington, who was on the metro near Maelbeek at the time of the attacks:

Metro passenger Sander Verniers was near the scene of the attack. He told CNN that the explosion:

Produced strong winds going [through his train] and some noises that shouldn't be there. We all had to get out. There was a lot of smoke.

NPR quoted 32-year-old Alexandre Brans at the Maelbeek station as he wiped blood off his face:

The Metro was leaving Maelbeek station for Schuman when there was a really loud explosion. It was panic everywhere. There were a lot of people in the Metro.

The New York Times also spoke to 50-year-old Henk Stuten who watched the aftermath of the Maelbeek station bombing from his office in the European Commission above the station:

We felt a boom, we felt the building tremble. We saw through the windows that people were rushing out of the metro exit.

All of the eyewitness accounts of the Brussels attacks are devastating stories of innocent people caught in the midst of a terrible situation. Hopefully the survivors' stories will be kept in mind to help motivate people to end violence, and achieve peace, worldwide.