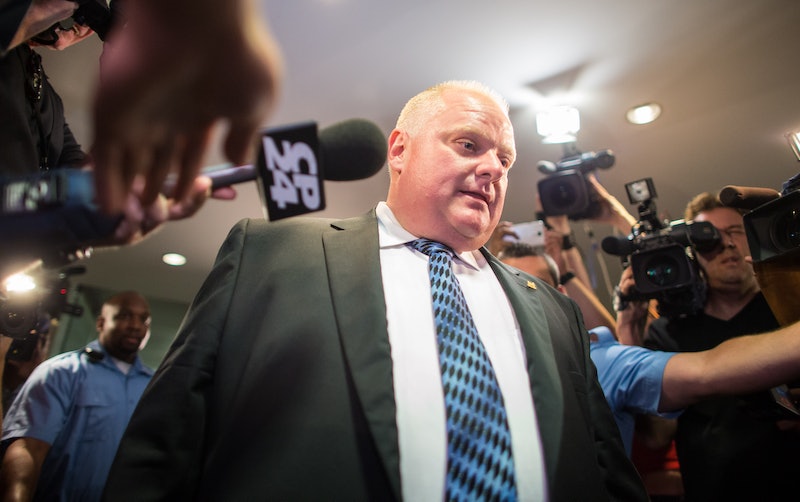 On Tuesday, March 22, Rob Ford, the former mayor of Toronto, died at 46 years old. His office released the following statement: "With heavy hearts and profound sadness, the Ford family announces the passing of their beloved son, brother, husband, and father." Ford had been battling the aggressive disease for nearly two years. What kind of cancer did Rob Ford have? He was diagnosed with a soft tissue cancer known as pleomorphic liposarcoma in September 2014. iPolitics, a Canadian political site, reports that he suffered a setback in October 2015, when two cancerous growths were discovered on his bladder.

In the spring of 2015, he underwent surgery for a growth on his abdomen. All in all, he underwent nine rounds of chemotherapy, reports USA Today.

On Monday, the day before his death, his Chief of Staff told the press that Ford had been moved to palliative care. The National Cancer Institute defines palliative care as such:

Palliative care is care given to improve the quality of life of patients who have a serious or life-threatening disease, such as cancer. The goal of palliative care is to prevent or treat, as early as possible, the symptoms and side effects of the disease and its treatment, in addition to the related psychological, social, and spiritual problems. The goal is not to cure. Palliative care is also called comfort care, supportive care, and symptom management.

According to the Sarcoma Institute, pleomorphic liposarcoma, the type of cancer Ford had, has a 39 percent survival rate and tends to affect adults between 40 and 60 years old. It's the rarest form of liposarcoma, and while the patient won't reportedly feel ill, they will notice lumps and tumors. Ford had been treated for 18 months, and the Toronto Star reports that his surgery in May 2015 was one of his last hopes for survival.

When asked back in 2014 how his time as mayor would be remembered, Ford responded: "It'll definitely be remembered," he said. "No one's going to forget it."