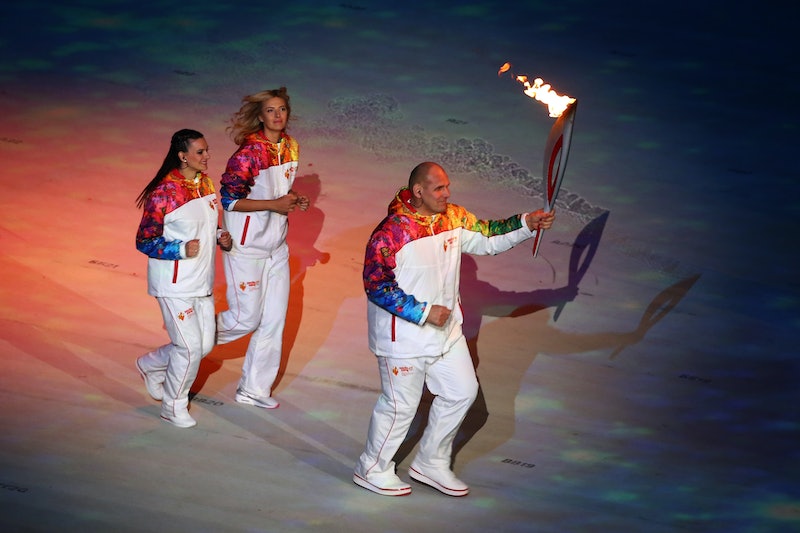 During the Sochi Olympics' Opening Ceremonies, Germany received attention for its rainbow uniforms. And it is understandable why. Though the uniforms don't depict a perfect rainbow, it's hard not to notice the Lisa-Frank-meets-pride-parade vibe that is definitely there, especially during these Winter Games. After all, the 2014 Sochi Olympics have suffered a severe PR hit, thanks to Russian leader Vladimir Putin's anti-gay stance.

Germany's rainbow uniforms have sparked a lot of speculation about the country's intentions to protest Russian laws. Unfortunately, any indication that the country was planning to publicly criticize Russia's laws against homosexuals was squelched when the German Olympic Sports Confederation insisted that the uniforms were "not a protest." Said spokesperson Christian Klaue to Die Tageszeitung, "This is just a fashionable jacket." (The media outlet, in turn, responded to the opening ceremony outfits by saying, "If this had been meant as a political protest, then it would have been okay, but if it's just a 'fashionable jacket,' and on top of that, a butt-ugly one?")

Disappointing, yes, but still, one can't help but speculate that the intention behind the outfits was more than just trend-setting. But judge for yourself: Below, led by skier Maria Hoefl-Riesch, see Germany's team uniforms.

But, if the Germans gay-neutral rainbows have got you feeling blue, look no further than Greece's rainbow-fingered uniforms. See those rainbow fingers? What better statement of LGBTQ support than hands that showcase the largest international gay rights symbol?

And then there are Russia's rainbow staff uniforms, which are rainbow-themed, much like the German parkas.

And don't forget t.A.T.u., the gay-friendly band made up of Lena Katina and Yulia Volkova, who sang in front of participants in rainbow tracksuits.

For those that will undoubtedly say that the rainbow flag is not internationally known, just ask the International Congress of Flag Makers why they officially recognized it, or the creator why he thinks its the most visible symbol of the gay rights movement. Let's hope that Greece doesn't back-pedal when asked about the gloves, but instead voices their wholehearted support of international equality. At the very least, it's great to see athletes waiving the rainbow fingers.

RELATED: For photos from the Sochi Olympics' Opening Ceremony, click into the gallery below.