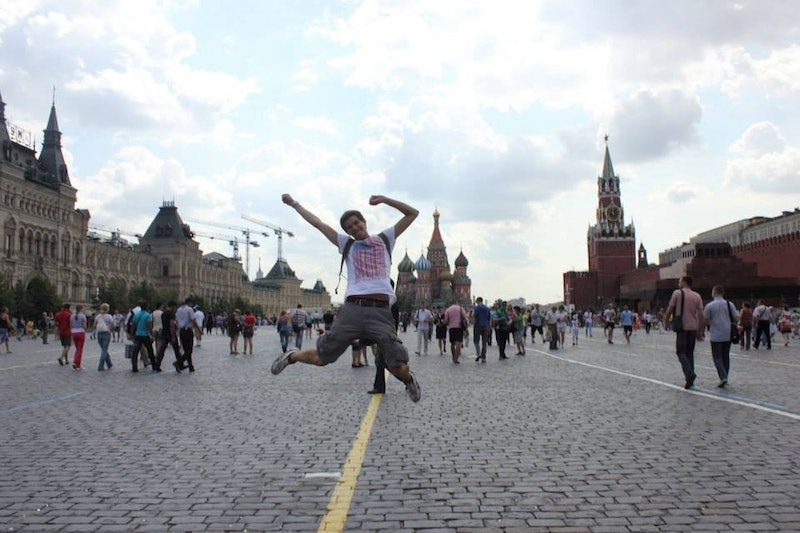 On June 30, Russian president Vladimir Putin signed into law an "anti-gay propaganda" bill, which made it illegal to engage in any behavior that could be considered "gay propaganda." The Western world erupted in anger, enforcing bans on Russian vodka and threatening to boycott the 2014 Winter Olympics, held in Sochi, Russia.

Putin stayed firm, announcing he will ban all forms of protest during the Games, and maintaining that participating athletes would be subject to the country's laws — or face penalties. (Financial penalties for "propaganda" can be up to the equivalent of $3,000, but the risk of being persecuted and/or attacked is a greater concern for many.) Bustle spoke with self-titled "model/actor/dancer/prince" Leo Neuringer, 19, an undergraduate student at UCL in London, England.

Neuringer is American, and was studying in the Russian city of Kazan on a study-abroad program before and after the law was signed by Putin. As a very direct result of the anti-gay laws, Neuringer, a gay man, recently decided not to return to Russia for another term of full-time study. Bustle spoke to him about his experience:

Did you experience homophobia in Russia?

I wasn’t going to tell anyone in Russia that I was gay, because it’s asking for trouble. They don't ask, because they don’t want to know. It wouldn’t have helped me in any way, and I didn’t want to push their conservatism, which I knew was underlying. In my studies of Russia over the past hundred years, I had looked at their history. Their LGBT campaigns were miserably ineffective.

My host family had a ten-year-old boy, and I didn’t want them to feel like I was threatening to him. The new law ties a very unfair parallel between homosexuality and pedophilia. I didn’t want them to confuse my homosexuality and pedophilia. He sat beside me while I was on the computer. If he looked over my shoulder, I could be exposing him to that "propaganda." [Not exposing minors to "homosexual propaganda" is a key part of the law.] I didn't tell the host family I was gay. Eventually, they asked if I had a girlfriend in London, and I was like "... Yeah!"

I purposefully brought different clothing. I wore looser clothes, dark colors. Cargo shorts instead of tight shorts. I got a really short haircut before I went, because I thought I might as well play it safe. While you're there, no one expects you to be gay. Even though it's kind of apparent with the way that I speak regularly, it didn't even occur to them.

How did it feel to have to change things about yourself while you were there?

It was numbing. It was like I had disconnected from the person I had become in London.

I went to London, and figured out it was much more fun to be who I wanted. I spent the year forming this image, getting completely comfortable in my own skin. And then, going to Russia and disconnecting from all of it... It was like, I would have felt upset about it, but I was feeling nothing.

It was fake. I was trying to be me as much as I could, but I couldn’t be. I didn’t tell them I was Jewish. They didn’t know anything about my life in London, and all of my friends. I made up everything. I changed my voice so it wouldn’t go up and down so much... I made it more of a monotone.

What might have happened if you'd said you were Jewish?

They’re not a very welcoming people to anything that’s different. They’re not nice to Jews, Asians, Americans. I have a German last name. You know, the gay American Jew with the German last name! I covered up as many of those things as I could.

I would say "I'm Leo." They asked what my last name was, but in German, if I pronounce it as a Russianized version of the American one, they have no idea where it’s from.

How did your Russian friends and teachers talk about the law?

I originally thought, going into it, that I would have to alert the institute I was at. Identify that I am out in both my home countries [America and the U.K]. I was like, If there are any problems, I want you to be informed beforehand, so you can help me through whatever it'll be. But they weren't gonna ask. It wasn't gonna come up in class. My school told me nothing. So eventually I was like: I'm just not telling them.

What would have happened if you had, say, held hands with another man when you'd been there?

How did you make the decision to not return to Russia?

I was there for a month. I was supposed to go back for four months for a term abroad. Because my major is Russian and Spanish, I was gonna split the year between Russia and Spain. And I thought, "I can swallow my pride and do this." But more and more articles started coming out. There was a guy who came out on his birthday and was tortured, raped with a beer bottle, and killed.

And I thought, clearly this shit is not getting any better. And I'm not going anywhere where the government not only won't protect me, but will persecute me.

By the time I was leaving, I realized I was sad to leave it. There was a lot that was charming and really interesting, and I hadn’t thought about what it would be like to be back in London. I was in Heaven [a gay nightclub in London] and it was a shock to be in a club with people who could dance!

It was strange to be on the streets of London, and watch people looking at me. It took a while to get used to being able to check out other people.

How do you feel about leaving?

It's bad. I'm so upset. I loved the Russian side of my degree more than Spanish. And my host family, once you break through the shell, were so giving and lovely and fantastic. Russian culture is fascinating. There was so much good about it, and it was so exciting for me, until this happened.

Now, I'm trying to drop Russia [as part of my major] and change to a language and culture degree. I'd minor in Russian and major in Spanish. My school is very reluctant to let me drop Russian right now. They're telling me not to change. Am I going to have to go to higher-ups and say, this is [about] a violation of my rights?

What would you tell other gay Americans who want to visit Russia?

I would say that if they wanted to visit Russia as a tourist, they should see the Red Square and St. Petersburg. But [if you're gay] you can't hold hands with someone. You can't kiss someone. You cannot be gay there. You just can't.

Do you think Russia will void the law?

Russia's not going to void by itself. More than 80 percent of Russians are against gay marriage.

[The law] was never brought up. It wasn't brought up in my classes, with people I was speaking to. Gay rights aren't mentioned. I think the only way it'll change is international pressure.

But despite what's going on right now, I would, ideally, really like to go back. Because there's a lot more to Russia than most people would think.