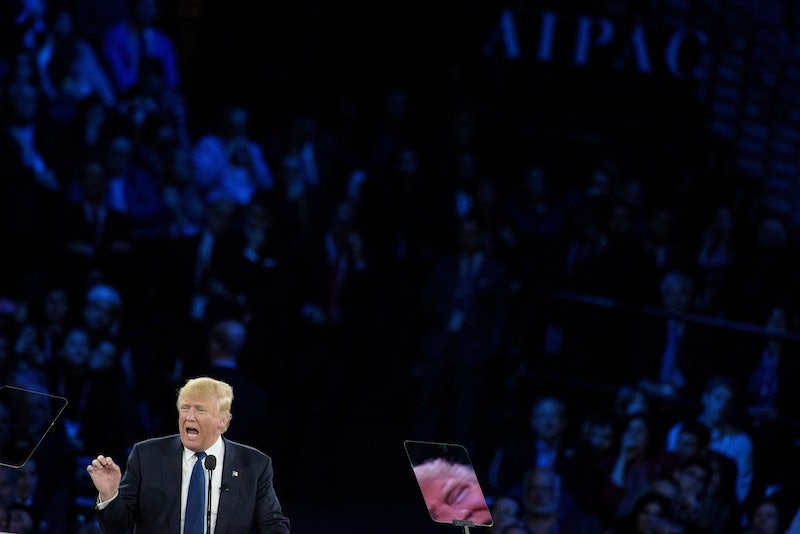 If ire and outrage is a direct correlation of passion and care, then many presidential candidates were simply overwhelmed with concern over terrorist attacks that claimed the lives of dozens and injured far more in Brussels. The incident occurred on Tuesday morning: Two explosions at the Brussels Airport and an additional explosion at the Maelbeek metro station have placed the capital city on high alert. American presidential hopefuls are speaking out about the incident; many of whom are using it as a way to bolster distressing, unwelcoming policies. GOP frontrunner Donald Trump's alienating Brussels response stands as perhaps one of the most cruel to emerge following this tragedy.

The Donald's reputation for being a prolific phone interviewer was on full display on Tuesday morning. He called into ABC's Good Morning America, Fox Business Network's Mornings With Maria, and Fox & Friends to speak his piece about the attacks. Unsurprisingly, Trump was critical of the United States' response to terrorism threats in the past.

What truly stood out were his disparaging comments about the city of Brussels as well as his proposed response on American soil were a similar attack to occur in the United States. His Fox & Friends interview ultimately culminated in Trump describing Brussels as a "disaster," echoing previous remarks he'd made in January. Trump's statements in the past — that the city was a "hellhole" — were divisive enough for The New York Times to run the headline "Donald Trump Finds New City To Insult: Brussels" on Jan. 27.

So, how would a President Trump propose responding to the Brussels terrorist attacks were a similar incident to occur in the States? The Donald had this to say during his Mornings With Maria interview on Tuesday:

Putting an entire religion under a microscope is an incredibly cruel proposition in the face of a tragedy weighing heavy on the hearts of people around the world. In all his angry rhetoric, it appears that Trump failed to acknowledge the survivors now faced with crippling grief from the loss of a loved one and a very real threat to their way of life. Subsequent tweets sent out following Trump's initial remarks included insulting President Obama's address in Cuba as well as retweeting his son about Arizona polling locations. By all accounts, it appears that the Donald forgot about the Brussels attacks just as soon as he'd spouted off about them.

As frustrating as it may be to note such a response, Donald Trump's cruelty masquerading as policy should not go unnoticed. This is your GOP frontrunner, America: a man apparently more concerned with enacting a police state than empathizing with those affected by tragedy.