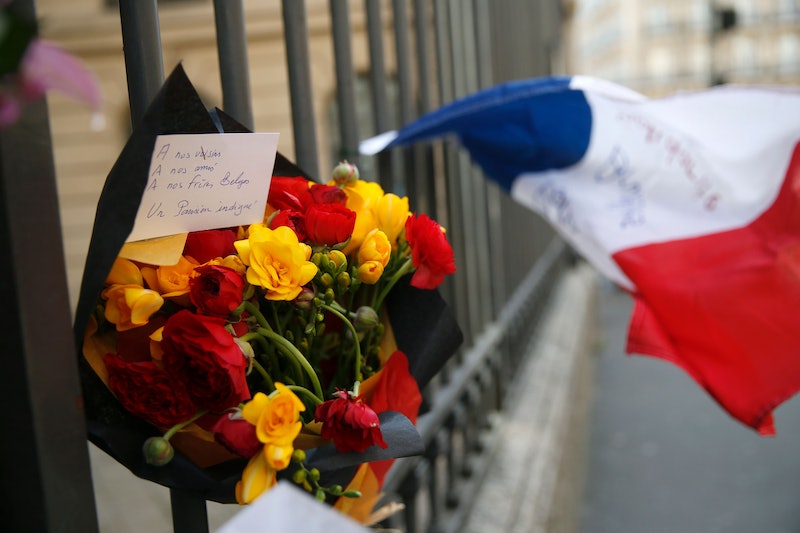 On Tuesday afternoon, just hours following the series of explosions in Brussels, Belgian police released a photo of three men who they suspect bombed the airport. The photo was pulled from CCTV footage in Zaventem airport, and according to Belgian newspaper La Libre, police are searching for the man in the red hat towards the right of the frame. The two men towards the left side of the photo are each wearing a black glove on one hand to possibly hide a detonator device, the local paper's sources claimed. According to Belgian news source DH.be, the two gloved men were killed in the explosion, but their identities have yet to be announced. According to The Guardian, Belgian police also have photos released by federal prosecutors of a possible metro station bombing suspect.

The airport experienced two explosions near its main terminal, and ABC News reported later in the day that a third device was deactivated. On Tuesday morning, the Maelbeek metro station was bombed just 75 minutes later, inciting a level four security alert throughout the nation. So far, 14 hospitals opened their doors to the victims, who are still tricking in. According to Belgium's health minister, Maggie De Block, the hospitals were adequately prepared. In total, the three attacks in Belgium killed at least 34 people and wounded 170 more.

A news agency affiliated with ISIS published a statement claiming responsibility for the event shortly after it happened; the message was spread via social media platform Telegram.

In the hours following the attacks, nations around the world have expressed their deepest condolences and have perpetuated a message of solidarity, offering to help in any way possible. Belgian authorities passed the photo of the possible suspects along to the United States before releasing it to the public, CNN said. The United Kingdom has also offered to help investigate the event. Federica Mogherini, the European Union's foreign policy chief, was in Jordan at the time of the tragedy and spoke with great emotion on the matter and defended the moderate Islam found in Jordan.

Europe and its capital are suffering the same pain that this region has known and knows every single day, be it in Syria, be it elsewhere.

More information will be released on the attacks as authorities gather and confirm the facts.